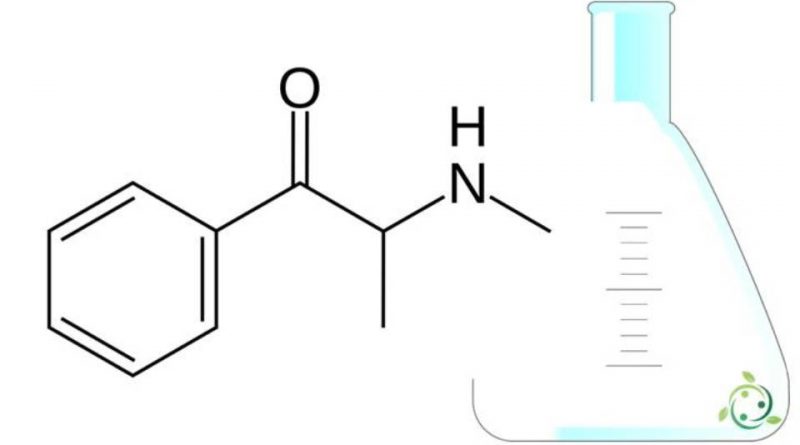 Methcathinone, whose term in the official IUPAC nomenclature is: (RS) -2- (methylamino) -1-phenyl-propan-1-one, is a monoamine alkaloid.
This compound has the brute or molecular formula C10H13NO, is also known by the names of ephedrone or, briefly, CAT or “Jeff”, and is chemically similar to methamphetamine and amphetamine.
Methcathinone is an alkaloid with psychoactive and stimulating effects, very similar to cathinone. It is used as a recreational substance due to its powerful stimulating and euphoric effect.
It is a synthetic substance very similar to the active ingredient of the Qat plant (Catha edulis (Vahl) Forssk. Ex Endl.), Cathinone. The difference between the CAT and the khat plant is comparable to the difference between the cocaine and the coca plant.
Physically it looks like a white crystalline powder.
Methcathinonee was first synthesized in the United States in 1928 and was patented in 1957 by Parke Davis. It was also used in the Soviet Union in the 1930s and 1940s as an antidepressant (under the name Эфедрон = ephedrone).
In the United States, metcatinone is on the list of psychotropic substances and has no approved medical use. Furthermore, the possession and sale of metcatinone for personal consumption is illegal throughout the United States.
Methcathinone is usually inhaled but can be smoked, injected, or taken orally.

The effects of methcathinone are by no means comparable to those of the Qat plant, traditionally consumed in Yemen, Ethiopia and Kenya; indeed they are much more similar to those of other exciting, such as speed.
Methcathinone removes the sense of tiredness and appetite, enhances the ability to move and physical performance, generates states of euphoria and great talkativeness, as well as a tendency to socialize and unhinge inhibitory brakes with moments of inner agitation and hyperactivity .
Once this substance is taken by inhalation, its effects occur between 10 and 20 minutes after intake; ingested between 30 and 45 minutes, while if smoked after only a few seconds. Depending on the dosages, it has effects that last from 3-5 hours up to 24 hours.
From the point of view of the consequences on human health, metcatinone has a strong wearing action on the heart and circulatory system. Since its effects appear minimal initially, it is easy to run the risk of overdose caused by repeated use. An overdose can cause heart palpitations, stomach upset, restlessness and sleep disturbances.
Some consumers complain of increased urge and difficulty urinating. Other consumers fall into depressive states as the effects wear off.
Methcathinone can cause both physical and psychological addiction.