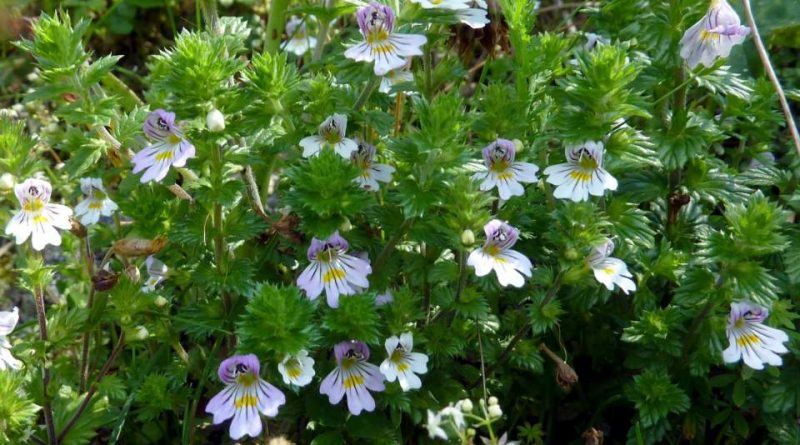 Eyebright or eyewort, (Euphrasia rostkoviana Hayne, 1825) is a herbaceous species belonging to the Orobanchaceae family.

Etymology –
The term Euphrasia comes from the Greek “ευφρυσια euphrusia” hilarity, joy (from ἐῧ éu true, good, good and φρήν fren animo, mente): a plant that cheers up, induces joy.
The specific Rostkovian epithet was attributed to him in honor of the Prussian physician and botanist Friedrich Wilhelm Gottlieb Theophil Rostkovius (1770-1848).

Geographic Distribution and Habitat –
Eyebright is a species with a vast circumboreal distribution and present from Western Europe, including Great Britain, to Eastern Europe.
In Italy present with certainty in all the northern regions, in Tuscany and in Abruzzo.
Its habitat is that of uncultivated and meadows-pastures, with optimum above the lower mountain belt and preferably in calcareous soils. Plants of this genus are hemiparasitic (partially parasitic) and obtain some mineral elements from the host plant; unlike totally parasitic plants, they possess green roots and leaves and can even survive on their own. 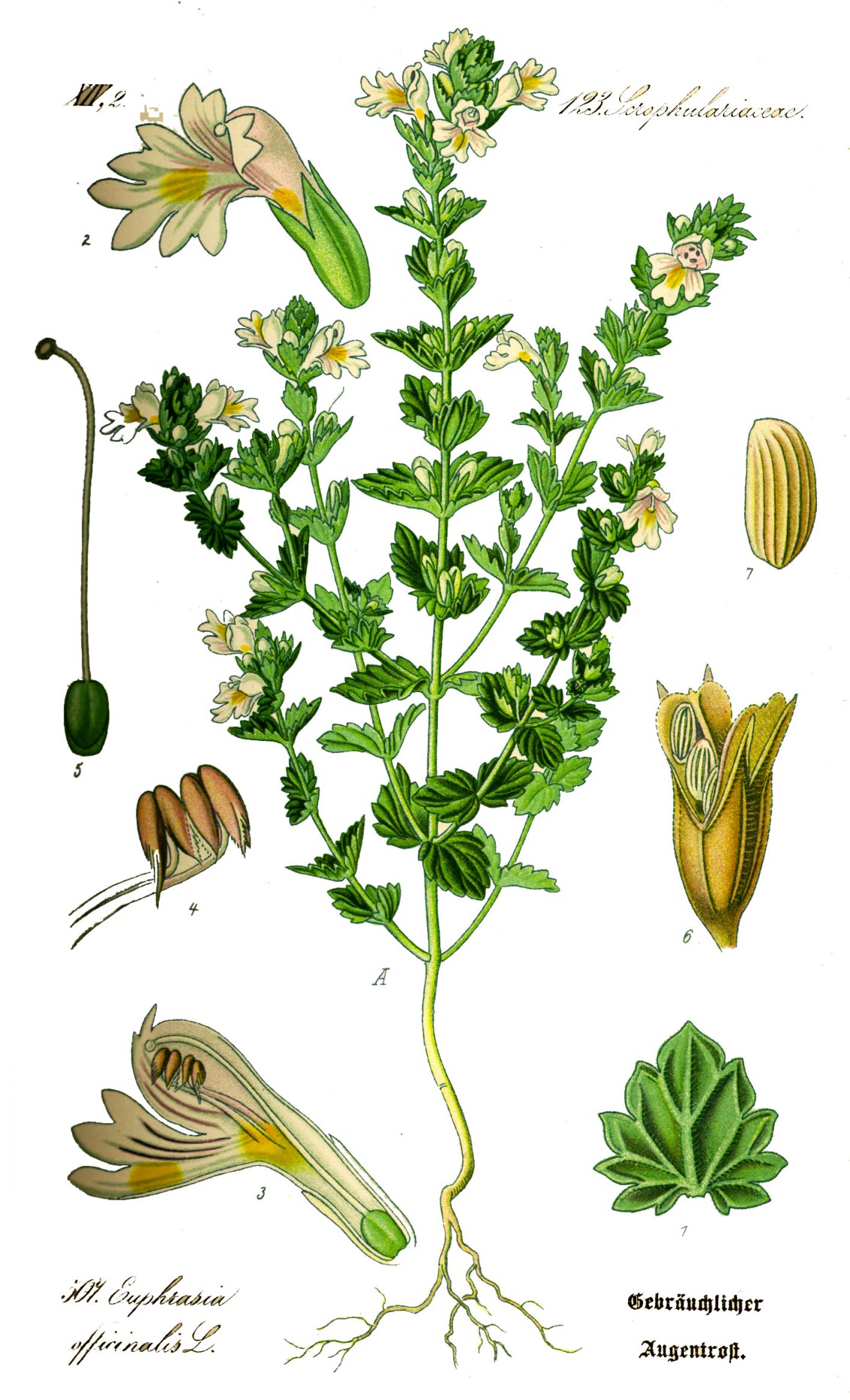 Description –
Euphrasia rostkoviana is a “hemiparasitic” plant with an erect-prostrate posture and in any case with minimum heights: 10 – 30 cm (minimum 5 cm; maximum 40 cm).
The plant can be both hairless and hairy.
The root is small and woody taproot type.
The stem is erect, simple or slightly branchy at the bottom, with a cylindrical section, while the surface is reddish and pubescent. In the upper part, the stem can be glandular.
The leaves are sessile and are arranged alternately in the lower part of the stem, while they are arranged in the opposite way near the inflorescence; they have a toothed margin with briefly aristated teeth; they also have a very variable shape but normally oval (with the maximum width towards the basal part; more exactly 1/3 from the base). The lower page is crossed by coarse ribs. Both pages are green, so they perform the normal chlorophyll function. The leaves have a width of 2,5 – 6 mm and a length of 6 – 14 mm.
The inflorescence is formed by leafy terminal spikes of a few white flowers streaked with other colors. The flowers, in the inflorescence, are arranged in a sessile way at the axil of bracts not very differentiated from the leaves. These leaf-bracts have a length / width ratio of about 1 – 2.5, are toothed (4 – 8 teeth per side) and the apical tooth is acute (with an angle of less than 90º), while the lateral teeth have an angle even more acute (less than 45º). The base is always rounded. The largest leaf-bracts are located about 1/3 of the inflorescence and are slightly wider than the actual leaves. They are also equipped with glandular hairs.
The flowers are hermaphrodite, zygomorphic and tetracyclic (with the four fundamental whorls of the Angiosperms: calyx – corolla – androecium – gynoecium); they have gamosepalus calyx, with four teeth (tetramer) and with a tubular-campanulate shape and a length of the calyx of 5 – 6 mm; the corolla is pentamera (with five lobes), simpetala, is bilabiate; the upper lip has a shape that resembles a square helmet with a blunt edge or even bilobed with a rim turned backwards; the lower lip has three lobes, also with the edges blunted and in turn divided into two lobes. The corolla has no spur, sac or goiter. The two lips form a right angle. During flowering, the corolline tube elongates, thus overcoming the calyx at the end. The color is white or lilac with purple longitudinal streaks and a yellow spot in the center of the lower lobe. Corolla length: 9 – 14 mm. The androecium has four didynamic stamens, inserted in the corolline tube, in particular they ascend under the upper lip of the corolla. The anthers are conniving and have a loggia bearing an elongated horn. Pollen sacs have an arrow-shaped lower end. The gynoecium has two carpels forming a bilocular supero ovary (derived from the two initial carpels). The single style is slightly longer than the stamens and is inserted at the apex of the ovary; the stigma happened.
The antesis is between May and October.
The fruit is a loculicidal capsule, ellipsoid, 4-8 mm long, with numerous long hairs and several ± ovoid seeds, vertically striated, 1-1.3 mm long.

Cultivation –
Eyebright is a plant that grows in most soils, preferring chalky or calcareous ones. It is a hemiparasitic plant, which grows on the roots of various species of grasses and also on the species Trifolium pratense and Plantago. The host herb does not seem to suffer unduly from this parasitism since the euphrasia is annual and its cells do not penetrate very deeply into the host herb.
This plant easily hybridizes with other members of its genus.
As far as propagation is concerned, this can take place by sowing outdoors in situ at the beginning of spring, in meadows, in a humid but not swampy soil.

Customs and Traditions –
The genus of this species is defined as a “critical genus” since Euphrasia Rostkoviana is a species characterized by a great polymorphism that can be summarized in the following characters:
– the variable shape of the leaves: oval, linear, oblong or obtuse;
– the different length of the capsule with respect to the glass;
– the capsule can be eyelashed or not;
– the color of the flower varies easily;
– the degree of pubescence of the plant up to being bristly or even glandular.
To determine with a certain degree of certainty the belonging of an individual to a given species, it is advisable to check the most significant characters on population samples (5 – 10 individuals) rather than on the single flower.
To complicate the situation in this species, in addition to frequent hybridizations, there are also more or less seasonal forms (dimorphism due to two successive blooms in the same year).
This plant has had a long use in ancient herbal medicine. It was considered a tonic-resolving and fortifying memory as well as ophthalmic. In this regard it seems that the extracts of this plant can relieve conjunctivitis and blepharitis. In this regard, it is interesting to note how the vulgar name of the plant, in German, translates as “relief for the eyes”.
For these uses it is important that only the correct forms of euphrasia are used, with glandular hairs on the calyx, as other forms do not possess medicinal virtues.
This plant in addition to firming the mucous membranes of the eye and relieving the inflammation of conjunctivitis and blepharitis has the ability to counteract phlegm so it is often used for infectious and allergic conditions that affect the eyes, middle ear, sinuses and nasal passages.
The whole plant is anti-inflammatory, astringent, digestive, ophthalmic and slightly toning.
Euphrasia rostkoviana is taken internally to treat phlegm, sinusitis, hay fever, upper respiratory tract infections, etc. As an ophthalmic, an infusion of the plant is used that can be taken internally or used as an eye wash. Alternatively, the diluted juice can be dropped into the eyes as eye drops.
However, the use of Rostkovian Euphrasia has some contraindications.
In fact, it should be used with some caution; it has been seen that it can induce side effects including blurred vision. The plant’s astringency makes it inappropriate for treating dry or stuffy congestion.
In general, the side effects include: mental confusion, headache, eye pressure, redness and swelling of the eyes if you already use 10-60 drops of lotion. In addition there are eye symptoms possibly followed by sensitivity to light, sneezing, nausea, constipation, cough, shortness of breath and increased urination.
Among other remedies it should be remembered that the plant can be used externally as a poultice to help wound healing.
The plant can be harvested during flowering and can be dried for later use. The dried herb is an ingredient in smoking herbal blends, used in the treatment of chronic bronchial cold. From the juice of the plant a homeopathic remedy is obtained which is used in particular in the treatment of eye inflammations and colds.
The substances present in this plant are: rhinantine, tannins, various essences and salts.
Euphrasia rostkoviana is also used by some as a salad due to its slight bitter taste.
A further use of this plant is in gardening where, although rarely, it is used in rock and alpine gardens to create homogeneous pads and fillers.

Preparation Method –
The whole plant is used from Euphrasia rostkoviana, which can be harvested during flowering and also dried for later use and taken internally in the treatment of phlegm, sinusitis, hay fever, upper respiratory tract infections, etc. As an ophthalmic, an infusion of the plant is used that can be taken internally or used as an eye wash. Alternatively, the diluted juice can be dropped into the eyes as eye drops.
It is also used in the kitchen by some as a salad for its light bitter taste.