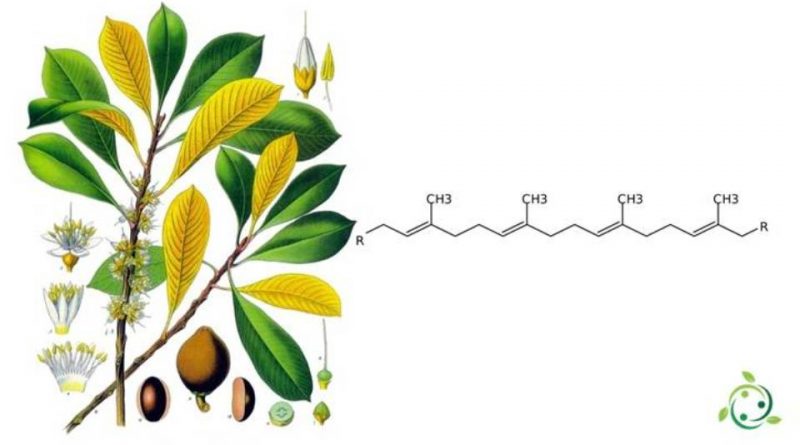 Gutta-percha is a macromolecule of vegetable origin very similar very similar to natural rubber or caoutchouc, from which it differs, however, in many properties, including the absence of elasticity.
The term gutta-percha derives from the English gutta-percha, in turn originating from the Malay gĕtah pĕrcah which means “gum of perch”, from the name of the tree from which it is derived.
Gutta-percha is the dried latex of various tree species of the Sapotaceae family, indigenous to the Indomalese region.
The species from which gutta-percha was first obtained was Palaquium gutta Burck but since the latex was extracted by cutting down the trees, rather than carving them, the species was almost destroyed; today gutta-percha is mainly obtained from P. oblongifolium Burck, P. borneense Burck, P. Treubii Burck and Payena Leerii Benth. and Hook.
The area where these plants grow is considerably smaller than that of rubber plants. Cultivation on plantations is very limited (Tijpetir plantations in Java and Selborue in Sumatra).
Gutta-percha has been used in the East since ancient times. In Europe it was imported towards the middle of the century. XVII from Tradescant, but had no application. Only in 1847 did the Siemens company begin its use for the preparation of submarine cables, exploiting its high insulating power and the property of being impermeable to water and relatively elastic.
However, its use in industry decreased during the twentieth century, mostly replaced by synthetic resins.
It is mainly used for sheets, pipes, waterproofed clothing and other objects; in particular and is used in dentistry to close the canals after the devitalization of the pulp, the innermost part of the tooth.

Gutta-percha was introduced in Italy for the first time in the early twentieth century by Giovanni Battista Pirelli, founder of the homonymous company.
From a chemical point of view, gutta-percha is a polytherpene, that is a macromolecule belonging to the terpenes family. In other words, it is an isoprene polymer with more than 40 carbon atoms. It is formed by 1,4-trans addition, and the result is an elastomeric plastic material that has several industrial uses.
Furthermore, gutta-percha and rubber are the same from the point of view of constitution. In fact, in both polymers the sequence of atoms and bonds in the monomer unit is identical. However, the presence of the double bond determines a steric isomerism phenomenon, so depending on how the base monomer is arranged, we have two possibilities:
– Trans configuration, which produces a gutta-percha molecule;
– Cis configuration, which produces a rubber molecule.
This stereoisomerism, inside the polymer, has a very significant effect on its properties.
Thus, while the rubber turns out to be an amorphous elastomer, the gutta-percha at room temperature is a semi-crystalline polymer. Given the fact that the trans configuration, less bulky, favors packing.
From a physical point of view, rubber has a glass transition temperature (Tg) of −70 ° C while gutta-percha has a Tg of -38 ° C and melts at 60 ° C.