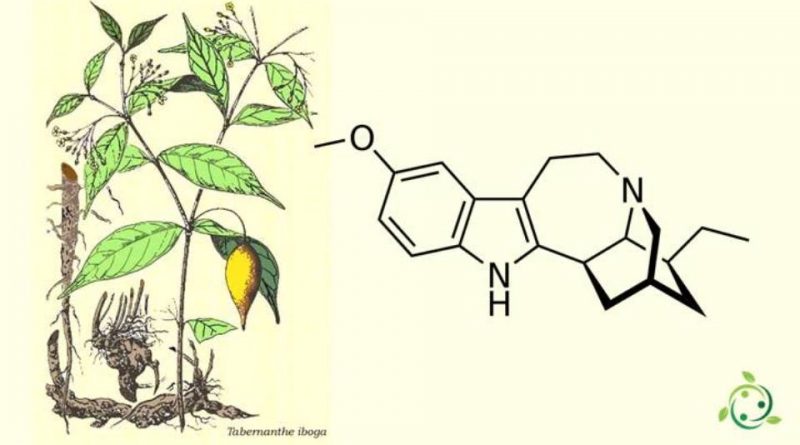 Ibogaine, whose term in the official IUPAC nomenclature is: 12-methoxy-ibogamine is an alkaloid with a brute or molecular formula C20H26N2O.
Ibogaine is a psychoactive alkaloid present in nature in some plants such as Iboga (Tabernanthe iboga Baill., 1889), a plant used mainly in traditional medicine in some countries such as Congo, Cameroon and Gabon.
Ibogaine is extracted from the root bark of the African Iboga plant, well known to some indigenous peoples for a long time. The people of Bwiti are probably the most jealous custodians of the tradition of Ibogaina-based rituals. Their relationship with the plant was multidimensional, encompassing spiritual, political, and medicinal.
Many other groups in Africa have used the plant for ceremonial and therapeutic uses, bringing the number of regular users to 3,000,000.
The traditional production of Ibogaine (essentially the same over the centuries), consists in grinding the bark of plant roots and chewing it.
This ceremony marks the transition from adolescence to adulthood by promoting a deeper identification with tribal culture and the development of the “adult” person.
Ibogaine has dissociative effects. Its characteristics were discovered by chance in the early 1960s when it was seen that the administration of the molecule could cause an interruption of heroin addiction, without withdrawal attacks.

However, due to its hallucinogenic properties and the risks associated with taking it by patients with certain health problems, ibogaine has been placed on the list of controlled substances and is illegal in several countries: United States, Sweden, Denmark, Belgium and Switzerland.
Ibogaine is not legal in some countries such as in Italy.
Although these aspects have slowed scientific research on its therapeutic properties, the use of ibogaine for the treatment of drug addiction has increased in various parts of the world and is administered in clinics in 12 countries spread across 6 continents. The alkaloid is used to treat addiction to heroin, alcohol, powdered cocaine, crack, and methamphetamine.
Ibogaine appears to catalyze partial or complete cessation of opioid addiction. This includes relieving withdrawal symptoms. Research also suggests that ibogaine may be useful in treating addiction to other substances such as alcohol, methamphetamine, and nicotine. Being a multireceptor drug, which has many molecular targets, it is classified as a dirty drug.