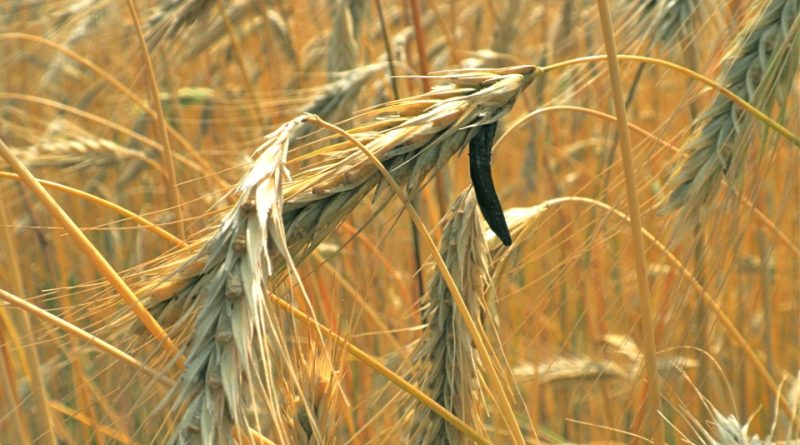 Etymology –
The term Claviceps comes from clávus nail and from the suffix -ceps (derived from cáput) head, head: for the enlarged head corresponding to the fruiting bodies.
The specific purpurea epithet comes from the Greek πορ specificρεος porphýreos of purple red color.

Geographic Distribution and Habitat –
Claviceps purpurea is a phytopathogenic ascomycete fungus that attacks a wide range of plants belonging mainly to the Poaceae family (more than 400 host species), many of which are economically important such as rye, triticale, oats, barley. It is classified as a biotroph, as it keeps plant cells alive for an extended period of time, influencing the plant’s defense mechanisms. 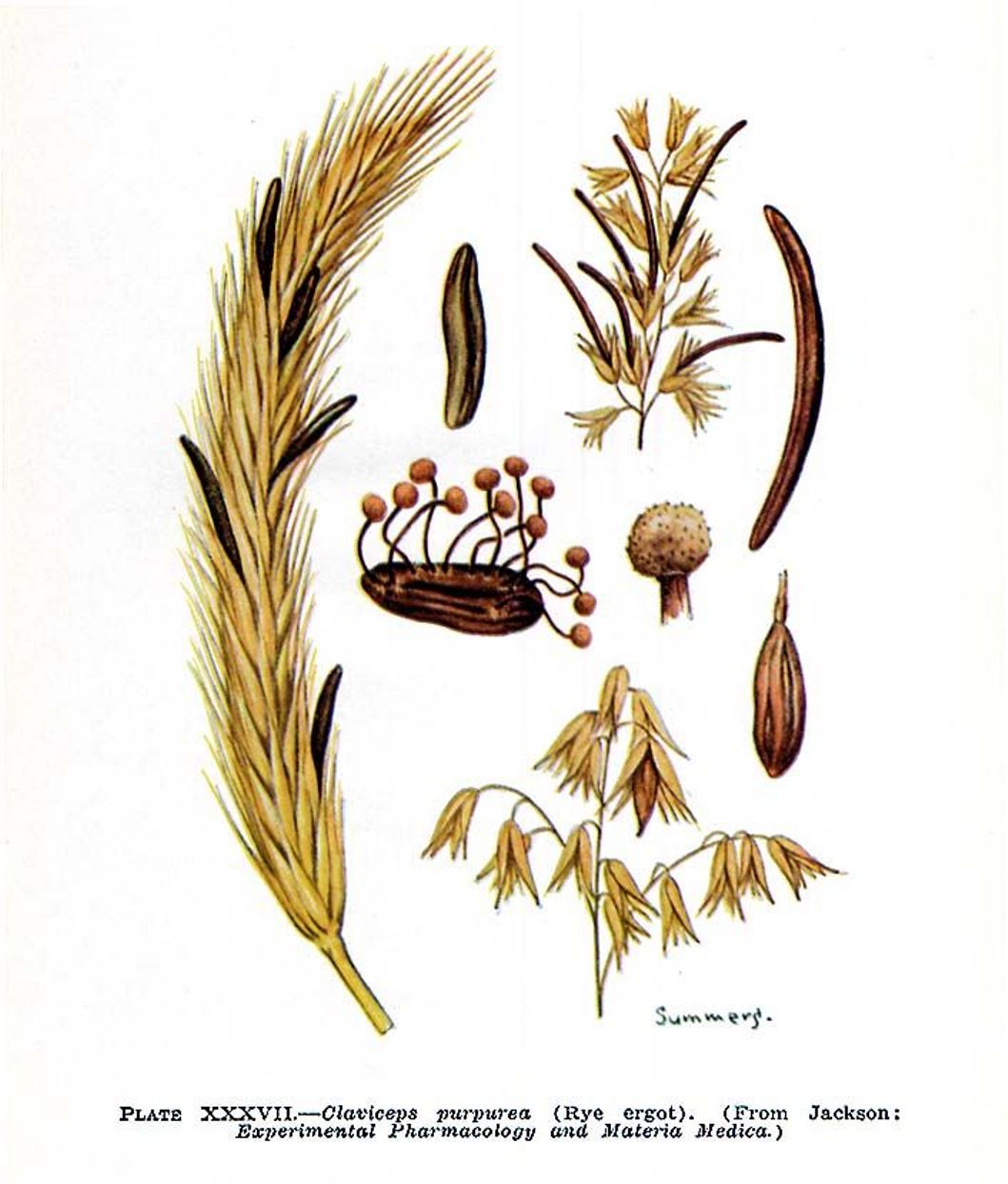 Recognition –
Claviceps purpurea is a fungus in which the ascus takes on a typical sac-like shape, and consists of the terminal cells of the hyphae of the fungus. Inside the rods, assembled in globular structures called perithecia, haploid spores with an elongated shape, called ascospores, are produced.
With the development of the fungus there is the formation of a sclerotium instead of the caryopsis (in the case of cereal seeds), the structure in which wintering takes place. The sclerosis usually has an elongated shape compared to the seeds, brownish in color. This matures in 5 weeks, at the end of which the growth of the rods occurs and the release of ascospores for the propagation of the fungus. The sclerotium is the only structure containing alkaloids; According to studies, the average content of these molecules in the sclerotia of Claviceps purpurea is 0.26 mg / g.

Cultivation –
Ergot is a fungus with a cycle of infection that begins in spring, when perithecia are formed on the sclerotia, where we find the ascus where ascospores originate. These are carried by the wind and adhere to the surface of the pistil of a flower. The first stages of development of the fungus “mimic” the pollination and fertilization process that occurs naturally in plants: the spore adheres to the stigmatic surface of the pistil (like pollen grains), and penetrates the tissues with the production of hyphae, which they grow imitating the development of the pollen tube in the stylus up to the ovary. A single spore is sufficient for completion of the infection.
Claviceps purpurea only infects plants with young, non-sterile ovaries. The lack of activation of defenses by the plant suggests that the fungus uses specific signals similar to those of the pollen-stigma interaction to avoid being recognized as a pathogen. Only after the hyphae reaches the ovary do host defense reactions occur, such as the deposition of callose to isolate the fungus.

Customs and Traditions –
Claviceps purpurea is the most studied and known species for its relevant effects in the contamination of packaged foods with attached cereals. Ergot spurs are fruiting bodies of the fungus itself containing several poisonous or psychoactive alkaloids from the ergotine group (including lysergic acid) that exhibit various types of effects on subjects who take them. These alkaloids, being vasoconstrictors, impair the circulation; they also interact with the central nervous system, acting in particular on the serotonin receptors.
The fungus, as mentioned, manifests itself in the ear with structures called sclerotia, which contain alkaloids. These are toxic to mammals (including humans) and cause Ergot, a disease better known as St. Anthony’s Fire. Recent studies have found that this disease is due to a complex of species, composed of Claviceps purpurea, Claviceps arundinis, Claviceps humidiphila and Claviceps spartinae, and it is believed that there are many others.
Given the high toxicity, the EU has established maximum levels of sclerotia content in feed and food for human consumption: a maximum level of 1,000 mg / kg of sclerotia in feed containing unground cereals (Directive 2002/32 / EC), and a maximum level of 0.5 g / kg of sclerotia in unprocessed cereals (except rice and maize) for human consumption (EC Regulation no. 1881/2006 of the Commission).
Symptoms caused by ingesting this fungus include circulatory disorders in the limbs, gangrene, hallucinations, convulsions, ischemic necrosis, reduced nutrition, reduced growth, reproductive problems. The most recent Ergot outbreaks in humans occurred in the 1970s in India, and in the years 1978 and 2001 in Ethiopia.
Diagnosis is mainly based on angiographic and radiographic analyzes. In addition, biopsies of skin, muscles, and vessels, and electromyographs can be done to evaluate conduction velocity in the arteries.
Results often denote narrowing of the arteries, such as groin, popliteal artery, iliac, and femoral artery, but without occlusion, which are typical vasoconstrictive effects of ergotamine; this vasoconstriction can occur on both limbs. If the patient complains of a headache, skull radiographs can be performed to check for the absence of intracerebral causes.
There is no specific cure for ergot and for this reason the doctor provides for the treatment of the individual symptoms that the patient presents. Depending on the case, the drugs that can be administered include anticoagulants, vasodilators, steroids, prostaglandin inhibitors; angioplasty is a solution that is considered only for the most severe cases with the risk of necrosis and gangrene.
The first documented medical use dates back to 1582 as an ecbolic medicine (to accelerate childbirth). The first alkaloid obtained in pure chemical form was ergotamine, a hemostatic remedy in obstetrics and in the treatment of migraine. Ergometrine is used to prevent postpartum hemorrhage. Bromocriptine is used in the treatment of Parkinson’s and type 2 diabetes mellitus. Secalonic acids, ergoflavine, and ergocrisine are known for their anti-inflammatory, neuroprotective, antitumor properties. A scientist who studied the alkaloids of Claviceps purpurea is Albert Hofmann, known mainly because he was the first to synthesize and test on himself the effects of lysergic acid diethylamide (LSD-25), discovered by chance while trying to isolate from the sclerotia of compounds stimulating the circulatory and respiratory systems.

Preparation Method –
The drug obtained from this fungus represents the starting point for obtaining individual active ingredients with pharmacological activity.
Ergot does not find uses in phytotherapy as such, but particular alkaloids (called ergot alkaloids) are obtained from the sclerotia, which are used in the medical field.
Pure alkaloids or their derivatives, therefore, are available as active ingredients contained in medicinal specialties that can only be dispensed with a medical prescription. These molecules are: ergotamine, dihydroergotamine, dihydroergotoxine, ergonovine, methysergide, nicergoline, cabergoline, bromocriptine and lisuride.
Ergotamine and dihydroergotamine constitute the active ingredient of medicinal products with indications for the treatment of headaches and migraine attacks. These active ingredients counteract migraine pain by interacting with the serotonin receptors located in the cranial arterial vessels. More in detail, ergotamine and dihydroergotamine exert an agonist activity against the 5-HT1A, 5-HT1B, 5-HT1D and 5-HT1F receptors, thus inducing vasoconstriction which leads to the resolution of headache and migraine pain. .
Cabergoline and bromocriptine, on the other hand, constitute the active ingredient of medicines used in the treatment of a wide variety of disorders, such as: Parkinson’s disease, hyperprolactinemia, prolactin-secreting pituitary adenomas, galactorrhea, prolactin-dependent amenorrhea, menstrual dysfunction, acromegaly, hypogonadism and neuroleptic malignant syndrome.
The mechanism of action with which these molecules carry out their activity involves type 2 dopaminergic receptors present in the luteotropic cells of the adenohypophysis (ie in the cells responsible for the release of prolactin) and the dopaminergic neurons located in the nigrostriatal area of ​​the brain.
In the past, ergot sclerotia were used in folk medicine as a hemostatic, emmenagogue and abortive remedy; as well as being used in cases of menorrhagia, metrorrhagia, uterine atony and migraine.
Currently, the only approved use of ergot is its use in homeopathic medicine, where it can be found in the form of granules, capsules, oral drops and glycerine macerate.
In this context, the plant is used in cases of uterine smooth muscle spasms, paralysis, convulsions, circulatory disturbances, bleeding, epistaxis, headaches, dizziness, drowsiness and confusion.
The amount of homeopathic remedy to be taken can vary from individual to individual, also according to the type of disorder that needs to be treated and according to the type of preparation and homeopathic dilution to be used.