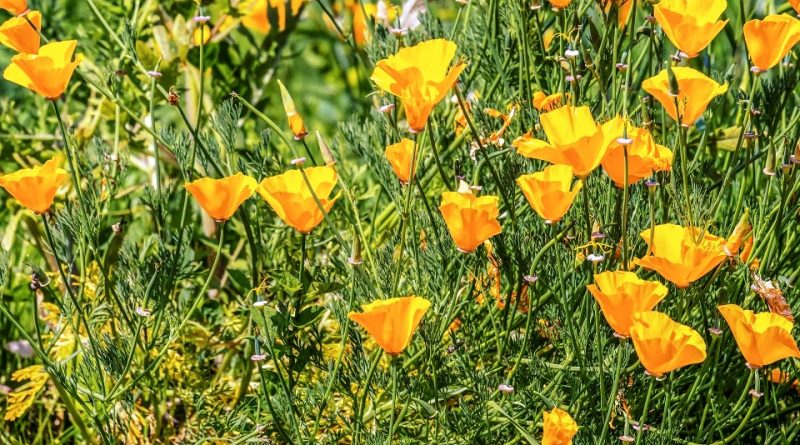 The California poppy (Eschscholzia californica Cham.) Is a herbaceous species belonging to the Papaveraceae family.

Etymology –
The term Eschscholzia of the genus was honored to the Russian botanist and entomologist Johann Friedrich Eschscholtz (1793–1831).
The specific epithet cali fornica comes from California, Californian, due to its origin or spread.

Geographic Distribution and Habitat –
The California poppy is a plant native to the United States and Mexico, which grows and develops considerably in an area that includes California and extends into Oregon, Washington, Nevada, Arizona, New Mexico, Sonora and up to the Lower Northwestern California and extends in the southern part to include Mexico.
Its natural habitat is that of the prairies where it colonizes entire areas such as the Antelope Valley California Poppy Reserve which is located in the north of Los Angeles County. At the height of the flowering season, the orange-colored flowers seem to cover all the approximately 706 hectares of the reserve. 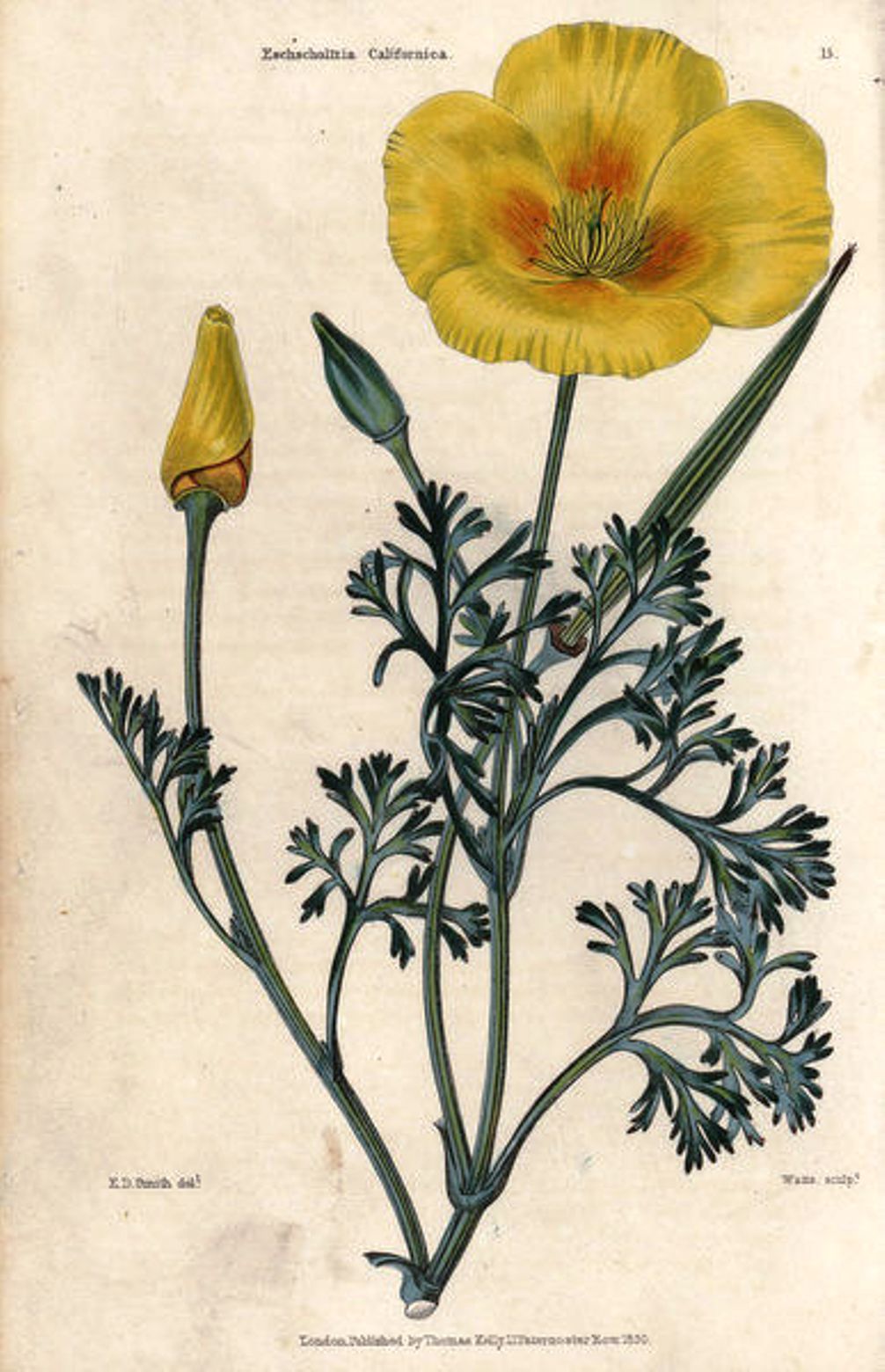 Description –
The California poppy is a perennial or annual herbaceous plant growing between 13 and 152 cm in height.
The leaves are blue-green glauco that are alternatively divided into round and lobed segments.
The flowers are solitary and carried on long stalks, of silky consistency, with four petals; each petal is 2 – 6 cm in length and width; the color of the flowers varies from yellow, orange and red, with some pink varieties.
Flowering in the northern hemisphere is from February to September.
The petals close at night (or in cold and windy weather) and reopen the following morning, although they can remain closed in cloudy weather.
The fruit is a thin and dehiscent capsule 3 to 9 cm long, which splits in two to release numerous small black or dark brown seeds.

Cultivation –
Eschscholzia californica is a drought-resistant plant that is self-sowing and easy to grow.
It prefers soils exposed to the sun and sandy consistency, well drained with new organic endowment.
Horticulturists have produced numerous cultivars with a wide range of colors and shapes of flowers and stems. Seeds are often sold as blends.
Certain cultivars have been awarded by the Royal Horticultural Society.
It is grown as a summer flowering ornamental plant, creating showy patches of cupped flowers in brilliant shades of red, orange and yellow (occasionally pink).

Customs and Traditions –
The California poppy as well as for ornamental purposes is used for some of its medicinal properties.
The sedative properties of this plant are also well known in folk medicine, which uses it for the treatment of insomnia, agitation and for other purposes. In fact, traditional medicine also exploits this plant for the treatment of many other disorders of different origins and nature, such as: nocturnal enuresis in children, bladder disorders, liver disorders, neurasthenia, agitated depression, melancholy, vegetative disorders, mood swings , vasomotor dysfunctions and endocrine disorders.
This plant contains alkaloids that act on the central nervous system, exerting a sedative action. However, because of the presence of these same alkaloids, the plant and its preparations must be used with caution, in particular in chronic use or in any case prolonged over time, especially in children and the elderly.
The active ingredients contained are:
– benzylisoquinoline and benzofentridinic alkaloids (the main alkaloid contained in the plant is californidine, but berberine, protopine, cryptopine, chelidonine, sanguinarine, escholtzine, glaugin are also present);
– flavonoids (including a derivative of quercetin and isoramnetina);
– phytosterols;
– carotenoids;
– zinc;
– xanthine pigments;
– cyanogenic glycosides (present in the freshly harvested plant).
These active ingredients act directly in the central nervous system and are able to induce sleep and exercise sedative, anxiolytic and spasmolytic activities.
These properties have been confirmed by various researches conducted on the subject. From studies conducted on animals, in fact, it emerged that the aqueous extract of escolzia is able to exert a strong sedative-hypnotic action. Still other studies, always conducted on animals, have instead confirmed the spasmolytic and anxiolytic activities traditionally attributed to the plant.
In any case, despite the studies carried out so far in vivo confirm the aforementioned activities ascribed to the plant, the use of this plant has not obtained official approval for any type of therapeutic indication.
However, it is not uncommon for the plant to be included in the composition of food supplements used precisely to promote sleep and improve its quality.
Furthermore, to Eschscholzia californica, analgesic, anti-neuralgic, anti-catarrhal, balsamic and antiseptic properties are also attributed, but at the moment there are no studies able to confirm its real therapeutic efficacy.
Eschscholzia californica is also used in the homeopathic field, where it can easily be found in the form of oral drops, granules and mother tincture.
Homeopathic medicine uses this plant in case of insomnia, difficulty falling asleep in adults and children over six years of age, insomnia associated with osteoarticular pain, mild anxiety associated with psychosomatic symptoms, chest tightness and enuresis.
The amount of homeopathic remedy to be taken can be different from individual to individual, also depending on the type of disorder that needs to be treated and depending on the type of preparation and homeopathic dilution to be used.
Among the contraindications it is emphasized that its preparations can involve ascertained hypersensitivity to one or more components. Furthermore, the use of parts of the plant and its preparations is also contraindicated in pregnancy and during lactation. It can also enhance the effect of MAOI antidepressants, and escolzia infusions and tinctures can enhance the hypnotic effect of barbiturates or other CNS sedatives.
From the ornamental point of view, due to its beauty and ease of growth, the California poppy has been introduced in several regions with similar Mediterranean climates. It is sold commercially and widely naturalized in Australia and has been introduced in South Africa, Chile and Argentina. It is recognized as a potentially invasive species in the United States, although no indications of adverse effects have been reported for this plant where it was introduced outside of California.
A UK study on meadow flowers focused on commercial blends classified California poppy as highly efficient at producing pollen, although it did not produce a significant amount of nectar.
This plant, in some parts is used for food purposes.
In 1903 it became the official state flower of California.

Preparation Method –
The California poppy, as said, is employed, in different ways in various therapeutic remedies.
The parts of the dried plant can be used directly; as a rule, 1 spoon of flowering tops is used for a cup of water, infused 5-8 minutes, 1 to 2 cups a day.
A hydroalcoholic extract or tincture of Mother of Escolzia can be prepared; in this case 20 drops diluted in little water or other drink are used before main meals; if used as an antispasmodic, 40 drops diluted in a little water or other drink in the evening before going to bed for insomnia problems.
Among the recommended associations can be taken as
intestinal antispasmodic and relaxing with chamomile and valerian.