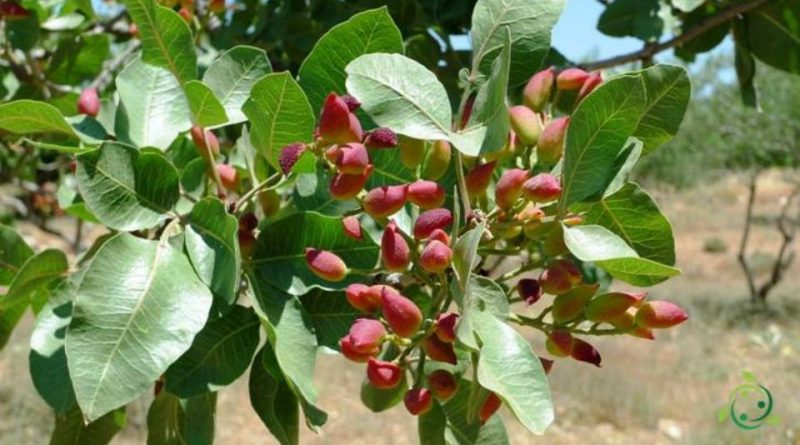 How to grow Pistachio in organic way

Pistachio (Pistacia vera – L.) is a fruit tree of the Anacardiaceae family and native to the Middle East, where it was already cultivated in prehistoric times, particularly in Persia.
As reported in his famous The Dipnosophists, Athenaeus of Naucrati, Greek writer and sophist who lived in the 2nd century, in the Roman Empire, various Greek and Hellenistic authors speak of pistachio, placing its cultivation in Syria, Persia and India, and calling it bistachion or pistekia or pistekion.
Therefore, the thesis according to which “pistachio” derives from the Arabic “fustuaq” is unfounded.
Soon its cultivation spread in the Mediterranean basin between the Greeks and the Romans.
Today, in Italy, pistachio is grown in the south and especially in Sicily and especially in the area of ​​Bronte (CT) and in the province of Agrigento.
The pistachio plant has the reputation of a rustic plant but if cultivated intensively and in irrigation it can manifest some fragility. In addition, the pistachio is a dioecious plant, that is, with the presence of specimens that bear only male flowers and others only female flowers and this feature must be taken into account when planting.
To this is added another peculiarity, namely that in the flowering of the pistachio the male flowers develop first and, after a few days, the female ones. For this reason the male flower produces vital pollen only for 2-3 days, while the female one is receptive for 4-5 days. Furthermore, pollination is anemophilous, that is, due to the action of the wind.

Pistachio plant –
To start a good production, whether you go towards a commercial or family type cultivation, it is necessary to take into account that a male pistachio plant is necessary to pollinate a number of 8-10 female plants.
In addition, especially in larger crops, it is good to place a greater number of male specimens behind the prevailing winds in order to favor pollination (which we remember is anemophilous) from male to female flowers.
It is also advisable to plant already grafted plants of at least 1-2 years of age, especially if you are not familiar with grafting this plant which has a low percentage of engraftment.
The planting distance of the pistachio, despite what is found in some texts, must never fall below 7 x 7, especially if the cultivation is irrigated, as the plants tend to produce very expanded branches. The choice of this sixth, or even larger ones even if on the one hand it seems that it affects the quantity of product, in the long run, favors organic cultivation techniques and the lightening of pruning interventions, which then decrease production. in subsequent years.
The plant must be carried out between the second half of February and the end of March.
This is because the pistachio is grown above all in the southern regions, not so much for its resistance to winter cold, as the plant in vegetative rest bears temperatures up to -20 ° C, as for the danger of cold returns. In fact, the danger of the return of cold can negatively affect the early and delicate flowering which, in the most extreme cases, can compromise the production of the year.
For this reason, the cultivation of pistachio should preferably be carried out in regions with a Mediterranean climate and, above all, in very sunny and sheltered areas.

Soil type and irrigation –
Contrary to the common consideration that the pistachio tree is a rustic plant and adapts well to any type of soil, this is true to a certain extent. The pistachio in fact prefers a deep soil, rich in organic substance, with good drainage, especially if grown in irrigation and in flat areas.
As for irrigation, even if the pistachio grows and thrives well even in drought soils and in conditions of water scarcity, this plant benefits greatly from irrigation, being able to lead to even doubled production.
The recommended irrigation is drip irrigation, with micro-sprinklers that can be placed on flying wings or even, especially in recent years, for sub-irrigation.

Fertilization –
In the cultivation of the pistachio, especially if in the biological regime, fertilization takes on an important quantitative and qualitative role.
The bottom concoction is that from the first syllable to the plant which, let us remember, enters production after a few years. Here we recommend the intervention with mature lethal, to be placed in the holes dug and waiting a few days before planting.
For the following years, a lighter fertilization is sufficient, using compost or earthworm humus or, in any case, well-humified organic substance placed at the base of the plants.
Nitric fertilizers should never be used also because their use favors some phytophagous parasites which, in addition to damaging the plant, create significant ecological problems.

Pruning –
The pistachio is raised using the free pot shape, with a scaffold created at a height of one meter. This is a system that allows all the main cultivation operations to be carried out efficiently.
In pruning, take into account the phenomenon of production alternation to which this cultivar is subject is also taken into account. In any case, for the details of this technique, see the following page.

Pest defense –
If the cultivation of pistachio has respected the previous rules and has not made a reckless use of nitrogen products, the plant should not present particular problems.
In this sense it is advisable, in commercial production, to never create large specialized plots without the presence of grassing, interruption hedges of some broken rows, and interruption of the same with other crops. The low biodiversity of crops, combined with incorrect use of fertilizers and agronomic techniques is the first factor in the impoverishment of the system with phytopathological consequences that are often difficult to solve.
In any case, any intervention of merit must be carried out on the basis of the indications of an Agronomist, through a detailed inspection.
Any other indication of phytosanitary intervention, not supported by this indication, is not even indicative.
In the home-grown crops, natural macerates can be used, such as horsetail, nettle and garlic, which can prevent and strengthen the plant.

Productivity of Pistachio –
A pistachio plant enters production in a period ranging from the 5th to the 7th year of age. From the 10th year it enters the best productivity that lasts a very long time, 30-40 years. It should also be borne in mind that the fruits ripen gradually and that full ripening takes place from August until the end of September.
The production per plant can range from an average of 7-10 kg, with peaks that can however reach 30 kg, especially in irrigated systems.
After harvesting, the husk must be removed, followed by drying of the fruits with the shell in the sun or in specialized machinery. In the sun it can last around 3-4 days. Subsequently, the pistachio in shell must be stored in jute bags, in hygienically adequate, dark and dry rooms. The shelled pistachios, on the other hand, need to be roasted in order to be preserved.

Varieties and rootstocks –
Pistachio is a plant whose growing is expanding.
In Italy the most widespread cultivated variety is the Bianca, also called Napoletana or Nostrale. This is characterized by the bright green color of the seed, which is highly appreciated commercially. Among the other popular varieties, more locally, we mention: Cappuccia, Cerasola, Insolia, Silvana, Feminella.
Among the foreign varieties are the Kern and the Red Aleppo.
As for the male variety, to be used as a pollinator, the most common is the M10.
Finally, rootstock. In general, the most used is Pistacia theribinthus. Also, if not used as rootstock for female varieties, it can perform the function of pollinator.