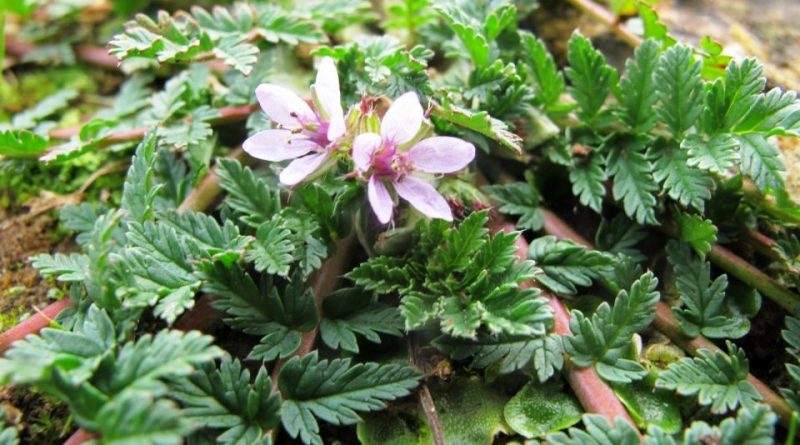 The redstem filaree or redstem stork’s bill (Erodium cicutarium (L.) L’Hér.) Is an annual or biennial herbaceous species belonging to the Geraniaceae family.

Geographic Distribution and Habitat –
The redstem filaree is a plant native to the Mediterranean basin from which it has spread to most of the temperate and Mediterranean regions.
It is present in an area that includes Europe, up to Norway, North Africa, through southern Asia to the Himalayas and China.
Its habitat is represented by sand dunes, meadows, arable land, waste areas, road edges, railway embankments, etc. and generally close to the sea but with an altimetric distribution between 0 and 1800 m. s.l.m .. 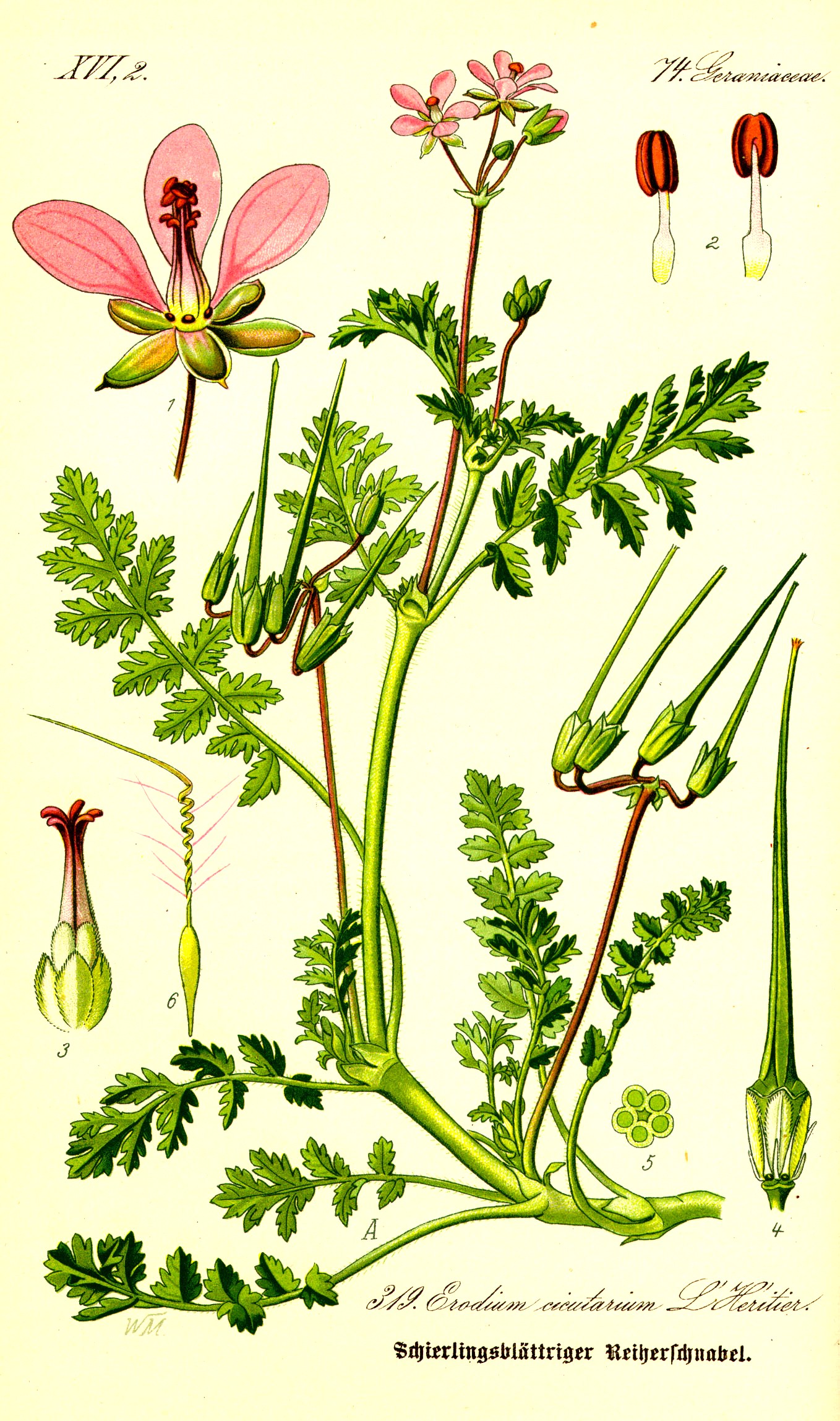 Description –
Erodium cicutarium is an annual or biennial plant in more temperate climates, hairy, and lignified at the base.
The leaves are pinnate with a long petiole bearing a horn-shaped seed that opens in a spiral shape to favor the dispersion of seeds with feathery structures similar to parachutes.
The flowers are often pink with dark spots at the base in inflorescences of 10 elements: five fertile and five sterile.
It blooms from May to August.
The fruit is a Polachenarian on peduncles always bent to the fructiescence, formed by a lower portion wrapped in the calyx and a 3-4 cm long beak. The lower portion contains 5 monospermic mericarps, shaggy, furrowed, 4-5 mm long, which when ripe are separated by hygroscopic winding of the stylus, which tears into spirally twisted reste.
The seeds are thrown away favored by a spring mechanism due to the seeds changing shape when they dry. The spiral unfolds rapidly when atmospheric humidity changes by partially burying the seeds in the soil. The two mechanisms (throwing and burial) are linked to the characteristics of the same hygroscopic tissue of the floral structures.

Cultivation –
Erodium cicutarium is a plant that prefers a sunny, well-drained position and calcareous or otherwise non-acid soil and is common in uncultivated or sandy soils; it is also likely to be resistant to marine exposure.
The plant can invade disturbed areas and, once established, can form dense populations that eliminate native vegetation and can successfully compete with local and wild herbs.
It blooms in the period from May to August. The seeds are often collected from several species of ants.
Propagation, for cultivation, may occur by sowing as soon as the seed is ripe. Germination usually occurs within 3 weeks.

Customs and Traditions –
The plant has long been harvested in the wild for local use as a food, medicine and source of materials.
The whole plant is edible, and the young shoots taste similar to parsley. It is also a useful plant for the production of nectar and pollen.
As for edible uses, young leaves, raw or cooked, can be eaten as aromatic herbs.
The root, in some areas, is chewed by children like gum.
For medicinal use, the whole plant is astringent and hemostatic.
It has been used in the treatment of uterine and other bleeding.
The root and leaves were once consumed by nursing mothers to increase milk flow.
For external use, the plant has been used as a cleanser on animal bites, skin infections, etc.
The seeds contain vitamin K.
Among other uses, it is recalled that from the whole plant a green dye is obtained that does not require a mordant.
The remains of the styles are very hygroscopic, they can be used in hygrometers and as meteorological indicators.
Finally, dried vegetable powder was mixed with watermelon seeds during storage and planting to prevent watermelon diseases.

Preparation Mode –
Redstem filaree is used both in the medical field and as an edible use.
As for the edible uses, you can consume the young leaves, raw or cooked, as aromatic herbs, which must be collected before the plant blooms. They are tasty and nutritious and are added to salads, sandwiches, soups, etc. They can also be used in recipes that call for beet leaves, plantain, thistle or amaranth.
A diaphoretic and diuretic tea is prepared with the leaves.
For typhoid fever, an infusion is used.
In addition, the leaves are soaked in water and used as a bath for the treatment of rheumatism.
A poultice, obtained from the chewed root, is applied to sores and rashes or for gout.