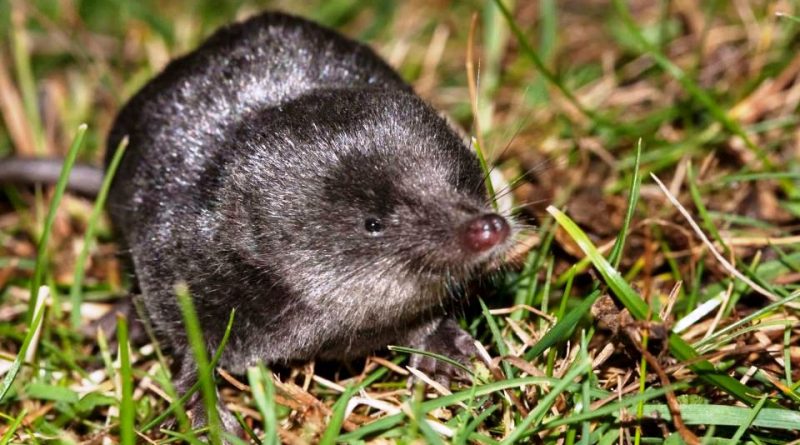 The Eurasian water shrew or water shrew (Neomys fodiens Pennant, 1771) is a small mammal belonging to the Soricidae family.

Geographic Distribution and Habitat –
The Eurasian water shrew has a diffusion range comprising most of the Palearctic region and lives on almost all of Europe and the southwest and northern parts of Asia.
It is also widespread in the British Isles on the territory of England, Wales and Scotland, while it is absent from Ireland, the Isle of Man, the Hebrides and the Shetland Islands.
In Italy it is safely reported up to the central regions, but its actual distribution is still unclear.
Its habitat is that of the wooded areas near permanent water sources or lakes, to which it is closely linked, provided that the banks are covered with abundant vegetation with the presence of tree trunks. 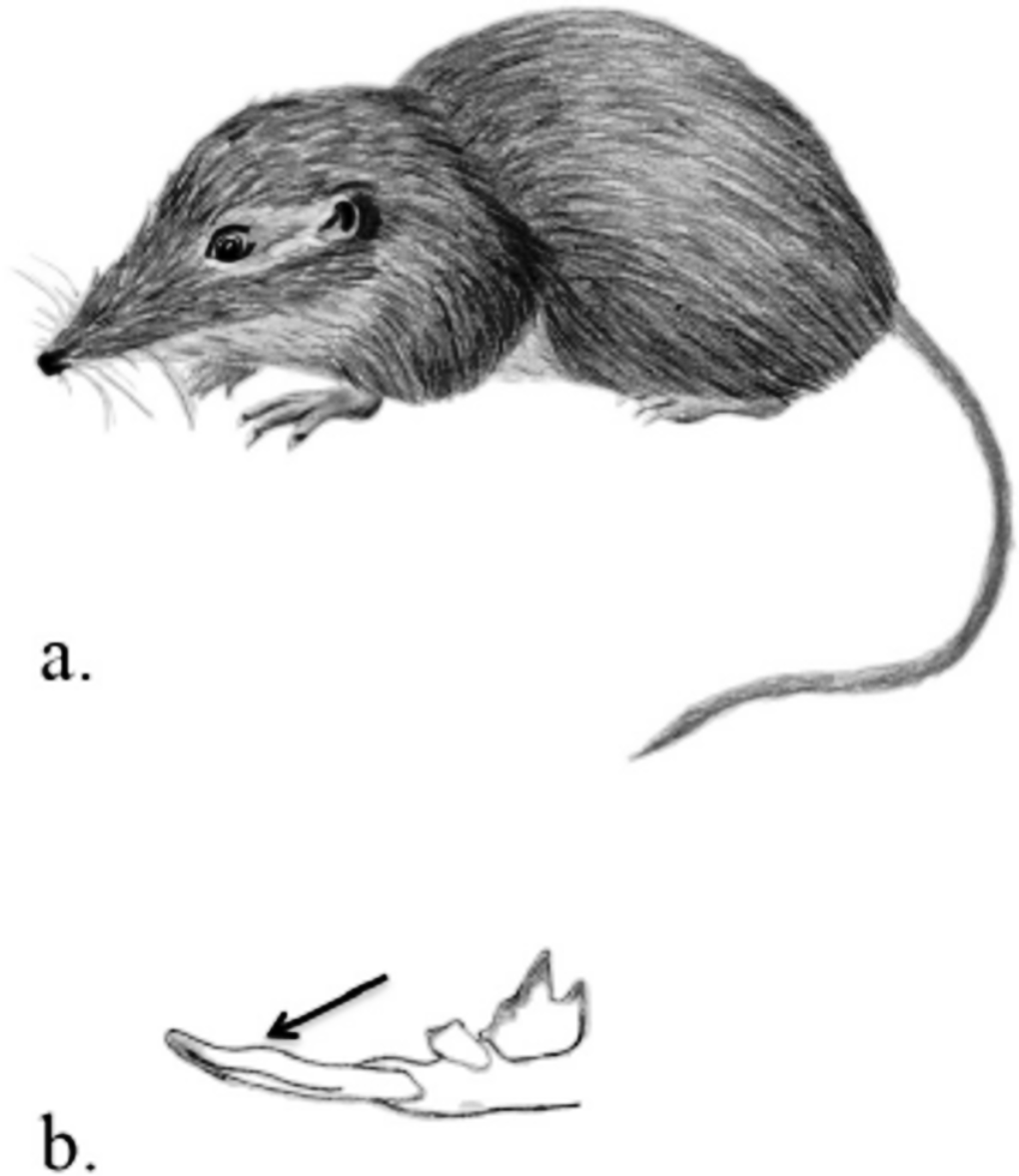 Description –
Neomys fodiens is a mammal with a head-body length of 7-11 cm, with a tail length of 4.5-8.2 cm and a weight of 9-23 grams.
From the morphological point of view, it is recognized for having a slate-black body, with different shades from individual to individual, up to brown-greyish colors.
The belly is instead of gray ash or dirty white, but due to the contrasting effect they look candid.
The throat, the jaw, the legs and the lower part of the tail are white, as well as white is a speck present above each eye.
The muzzle is stocky, conical in shape and its eyes are rather small and blue.
The ears, covered with a tuft of white hair, are in the shape of a semicircle and are completely hidden under the hair.
The legs are wide and flattened, with the hind legs longer than the front ones: the toes are covered with bristly hair, which offer good resistance to water and therefore represent a sort of webbing, very useful to the animal during swimming. In any case, the animal also uses these bristles as a comb to smooth the hair.
The tail has also adapted to aquatic life; it is in fact flattened in a lateral direction and equipped in the lower part with a double fringe of sturdy hairs that act as a keel, thus transforming the appendix into an excellent rudder.

Biology –
The Neomys fodiens is a mammal closely related to water, although some of these animals are captured in sites miles away from the nearest river or lake, and indeed.
In this mammal, the breeding period runs from mid-April to September, with a peak in May and June in northern Europe.
It is the female who builds deeper burrows than the one she usually digs to sleep; in these she digs a special chamber, which she covers with moss and small roots; in other cases she can build a round nest by weaving together herbs and leaves.
The gestation lasts 24 days, at the end of which it gives birth to 5 to 8 babies, weighing one gram, blind and hairless.
The young develop rapidly and are weaned at 27 days, becoming independent at 5-6 weeks.
In certain seasons, a second brood may occur in September.
This species has a maximum life span of only 15 months, but most die even earlier.

Ecological Role –
The Eurasian water topsoil is a solitary and territorial mammal.
Even if it is a good swimmer, it is rare to see them more than two meters from the shore, both because they usually colonize narrower streams of this value, and because moving in such open and deep waters would make them doubly vulnerable, both to attacks by aerial predators and by aquatic predators. The animal swims on the surface by floating with the head slightly above the surface, while the body remains flattened and the legs move like oars.
It can also walk for some time on the bottom of the rivers, clinging to the pebbles placed on the bottom: at other times it can be observed while they jump out of the water, probably in order to catch insects flying on the surface by surprise.
For each individual the territory corresponds to a stretch of river of about fifty meters, within which, in addition to the owner, various specimens of passage can also be found. It is an animal with catadromous habits, that is, it alternates periods of wakefulness and rest throughout the day and night: however it is more active during the day rather than at night, also having slightly longer periods of activity and rest. than those of common shrews.
The burrows to rest are dug in a shallow way and located along the shore; they never hibernate, so even in winter they can be observed hunting their prey under the ice.
As with other mammals of small proportions the reason for this alternation is their extremely fast metabolism: if the animal were three hours without eating, it would surely die of hunger.
They have a very limited range of vision, so shrews are easily frightened by any sudden noise.
The diet of this mammal consists mostly of tadpoles and water fleas, while on the bottom they prey on trichoptera worms and other insect larvae. They also feed on a wide variety of aquatic animals, such as snails, small crustaceans, frogs and even small fish, but they do not disdain dead animals either.
As soon as the animal catches food in the water, it immediately returns to the shore to dry and eat, since an excessive stay in the water would cause it to die from cold, due to the dispersion of body heat. A unique case among animals, these animals do not waste time drying themselves and then eating, but do both things simultaneously, consuming the meal while combing their hair with their hind legs.
Among the prey, moreover, it should be remembered that the Neomys fodiens manages to be right even against opponents of much larger dimensions than theirs: this is because their bite is slightly poisonous, thanks to a secretion of their maxillary glands, and can therefore be lethal even for small rodents, while in humans it causes redness and severe swelling.
Among the predators we remember the owls, followed by stoats, weasels, vipers and other snakes, but many also fall victim to larger predatory fish such as pike, eels and large trout.
Finally, as regards its state of health at an ecological level, the main threats to this species, like those of the congener Miller’s shrew (Neomys anomalus), are affected by environmental changes, such as drainage and harnessing of water courses. ‘water, and the scarcity of food due to the acidification of the water and its pollution with pesticides and fertilizers (G. Amori in Spagnesi & Toso 1999).
Among the conservation measures, it should be noted that Neomys fodiens is included in Appendix III of the Bern Convention and included in numerous protected areas. Species not huntable according to the Italian law 157/92. Also assessed as Least Concern by the European Mammal Assessment (Temple & Terry 2007).