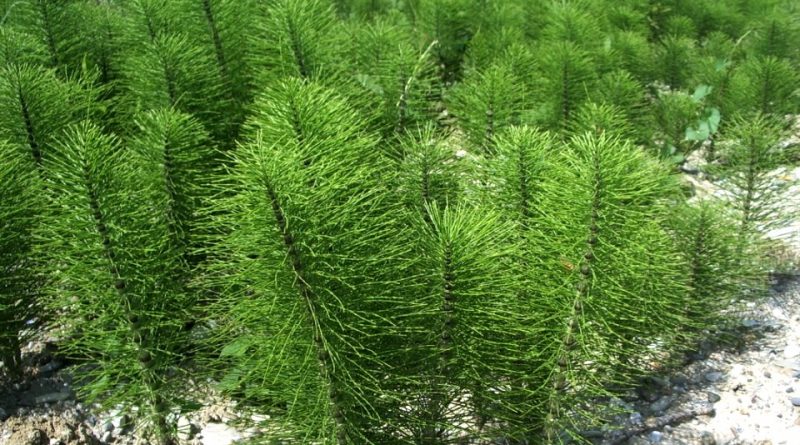 The Great horsetail or northern giant horsetail (Equisetum telmateia Ehrh., 1783) is a perennial herbaceous species belonging to the Equisetaceae family.

Etymology –
The term Equisetum comes from the genitive of equus horse and from sétum setola, horsehair: reminiscent of the horsehair of the horse’s tail.
The specific epithet telmateia comes from the Greek τελματιαῖος, α, on telmataĩos, a, on palustre, which lives in swamps (derived from τέλμα télma pond, swamp): in reference to the growth environment.

Geographic Distribution and Habitat –
The Great horsetail is a circumboreal plant found in Europe, North Africa, temperate Asia, the Caucasus and North America.
In Italy it is present everywhere; in the Alps it is less frequent in the provinces of Cuneo and Turin.
Its habitat is that of humid and shady places (poplar groves, alder groves, damp ash groves and arboreal willow groves) but also of areas near springs and streams where it grows, preferably, on both calcareous and limestone / siliceous substrates, with soil at pH from basic to neutral, low or medium nutritional values ​​and high humidity values.
It is present in an altimetric range that can reach 1500 m s.l.m .; therefore they frequent the following vegetation planes: hilly and mountainous (partly also the subalpine one). 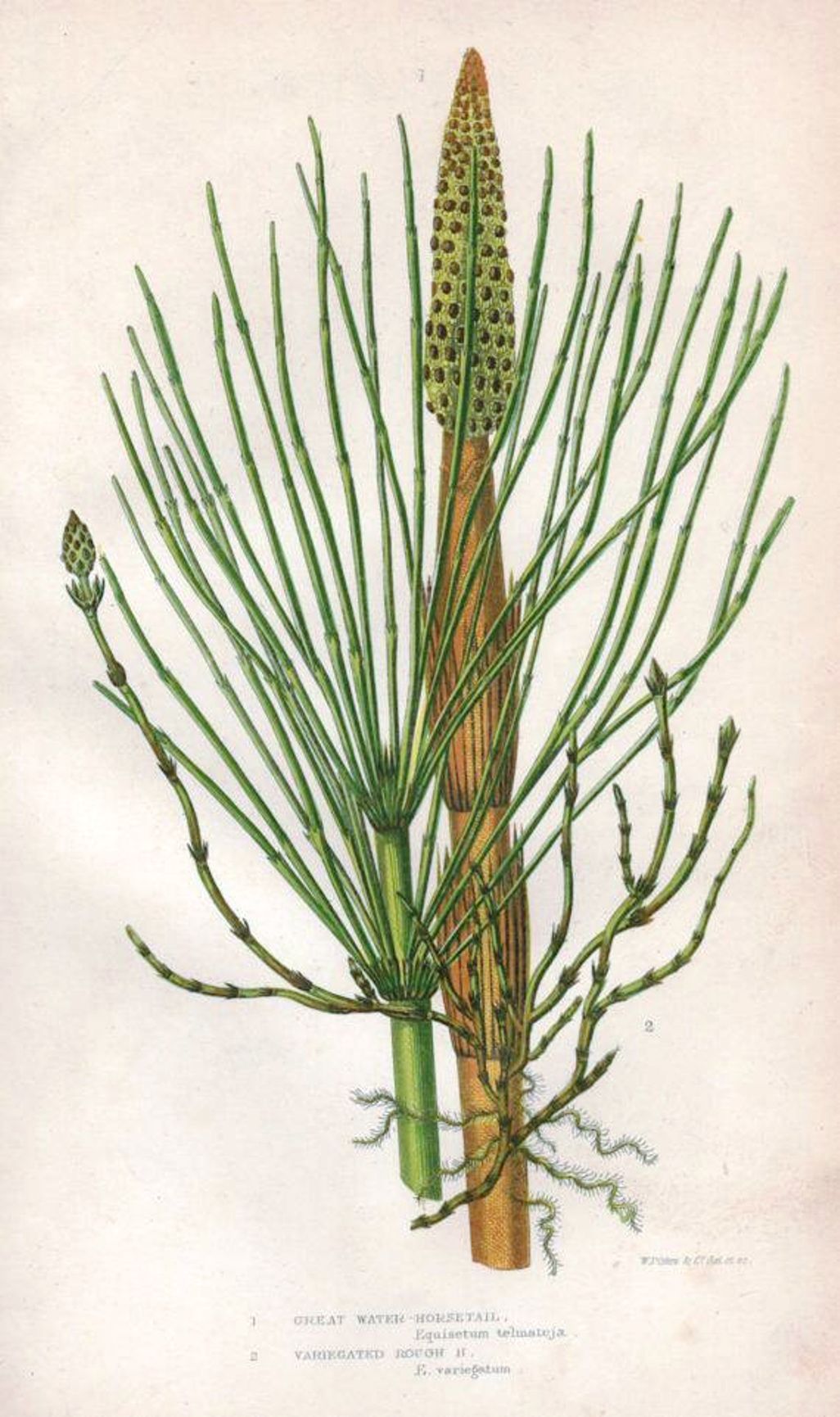 Description –
The Great horsetail is a perennial herb plant that can grow in height from 5 to 20 dm.
The roots are secondary (fasciculated) from rhizome and of the adventitious type and generally have the conformation of tufts that branch off from the nodes of the rhizome and last a year at most.
This underground part is in the form of a horizontal rhizome with various ramifications that give rise to erect aerial shoots and therefore to the corresponding epigeal stems.
The shoots are provided with a single apical cell, very large, in the shape of a tetrahedron from which the subsequent cells are generated by division for the development of the adult stem.
The epigeal part or culm consists of two types of stems:
– there are sterile stems, of rough consistency, of green color, synthesizing photos, in which the leaves are so insignificant that the stem replaces them for the photo-synthetic process. These stems are densely branched in layers; each layer consists of a dozen four-ribbed twigs placed in whorls at the base of the leaves in turn placed in the nodes of the stem; also the branches are articulated in nodes and relative internodes and the upper ones are elongated so that they exceed the apex of the stem itself.
– sterile stems, which develop only after the fertile ones have fulfilled their reproductive function, are whitish or brown, or even yellowish in color and therefore free of chlorophyll, suitable for reproduction; they are normally not branched but have nodes and internodes with only one apical strobilus of sporophylls. Also in this trunk at the nodes there are leaves but almost never the branches; the strobilus ends in a rounded way (not mucronate). These stems have a length of 1 – 4 dm.
Both fertile and sterile stems are longitudinally grooved (20 – 40 streaks in sterile stems) and divided into several nodes and their internodes. The stems are hollow or fistulous, with a longitudinal cavity that is at least 2/3 of the total diameter.
The leaves (microfilli) are located at the nodes of the stem. These are erect and close to the stem itself and are grown together (they form a sort of lobed collar or sheath around the stem) and are not differentiated into petiole and leaf blade; their dimensions are such that, in the case of fertile stems, they cover almost the entire internode. They have a lanceolate, scaly shape with a single dorsal nerve and a sharp, brown apex. For each node there are from 20 to 30 leaves.
The strobilus, inside which the reproductive system is present, is almost completely covered by sporophylls in the shape of a peltata leaf, i.e. a short peduncle is inserted in the center of the lower page of this modified leaf, while the opposite part of the peduncle connects to the central axis of the stem and therefore to the strobilus. The shape of the leaf is irregularly hexagonal. All around the lower end of the leaf are inserted several sporangia (the spore containers). These open at maturity through a longitudinal slit. Strobilo length: 2 – 9 cm.
The spores are all the same (sexually undifferentiated) with a layered surface in four superimposed levels. These spores later, according to the environmental conditions, will produce a male or female prothallus, from which then, through the fertilization of an oosphere by a “spermatozoid” (or male ciliated gamete), the new sporophyte can finally develop, that is other stems of the plant.
For the strobili the development takes place between February – March, while the spores reach maturity in the period of March-April-May. In May the sterile stems develop while the fertile ones are already dry.

Cultivation –
The Great horsetail is a common plant in humid places in general, such as meadows with stagnations, springs and streams but it can very well be satisfied with the road margins when it finds the right conditions.
In the winter, the aerial part of the plant dries up and disappears completely; thus the dormant hypogeal buds remain in the rhizomatous root which has various ramifications and is arranged horizontally.
Arrived in the spring, new cylindrical stems develop. First the fertile ones and then the yellowish and sterile stems.
Flowering is absent and the plant reproduces, as mentioned, by means of spores from March to May.

Customs and Traditions –
The Greater Horsetail is part of a family of plants that appeared on earth about 395 – 345 million years ago and have kept their characters almost unchanged.
This plant, used since ancient times, has curative properties: anti-haemorrhagic, cicatrizing (accelerates wound healing), haemostatic (blocks the flow of blood in case of hemorrhage), diuretic (facilitates the release of urine), astringent (limits the secretion of liquids), antituberculosis and remineralizing (especially valid for patients with pulmonary tuberculosis).
In the Equisetum telmateia there are some substances of which we remember: silicic acid, glucoside, saponins (equisetonin), flavonoids, small quantities of alkaloids, resins and organic acids (also ascorbic acid), bitter substances and other mineral substances (potassium salts , aluminum, manganese, iron and calcium).
Because of the presence of these substances, Equisetum telmateia can be used for various purposes.
In the past, among peasant families, sprouts were occasionally breaded and fried or seasoned with vinegar. It can be added to soups or minestrone as a supplement of mineral salts.
However, it should be remembered that, according to some texts, this plant if ingested in large quantities can present a certain toxicity as it contains the thiaminase enzyme which absorbs the vitamin B complex.
Among others, those for cosmetics are reported. In this area, anti-wrinkle creams are used where it seems to slow down the aging of the skin in general; it has anti-cellulite properties.
Moreover, in ancient times, due to the superficial presence of silicon granules, it was used to degrease and polish surfaces of containers, including metal ones.

Method of Preparation –
In Equisetum telmateia both rhizomes and aerial are used.
Especially in the past, among peasant families, sprouts were occasionally used and consumed after being breaded and fried or seasoned with vinegar.
In addition, sprouts can be used to add them to soups or minestrone as a supplement of mineral salts.