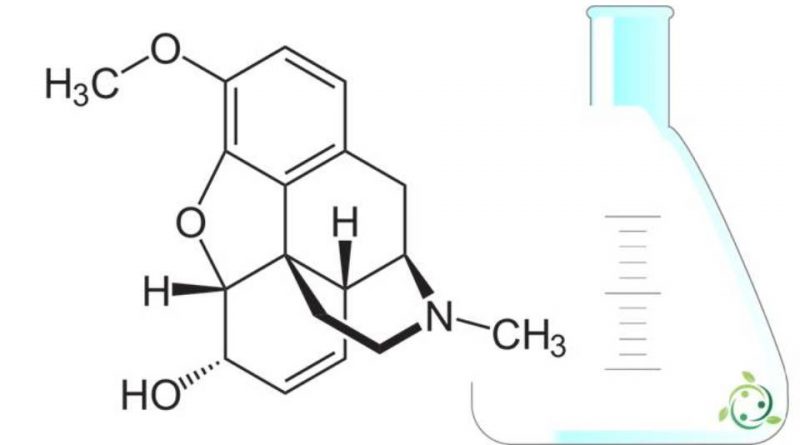 Codeine, whose term in the official IUPAC nomenclature is: (5α, 6α) -7,8-didehydro-4,5-epoxy-3-methoxy-17-methylmorfinan-6-ol, is also known by the name of Methylmorphine .
Codeine has a brute or molecular formula: C18H21NO3 and is an alkaloid containing 3-methylmorphine, a natural isomer of methylated morphine, and 6-methylmorphine.
Codeine is an opiate used for analyzes. It is mainly obtained by methylation of morphine, the main alkaloid of Papaver somniferum.
Both codeine and morphine are selective agonists of μ-opioid receptors. These receptors are involved in the modulation of pain neurotransmission and their activation induces analgesia. Codeine – and in particular the morphine resulting from its metabolism – as an agonist of these receptors, is able to activate them, exerting a pain-relieving action. In addition, codeine acts centrally by depressing the cough nerve center. In doing so, the active principle performs an antitussive action.
In pharmacology, codeine is used to treat mild to moderate pain and to relieve cough. It is also used to treat diarrhea and irritable bowel syndrome, although loperamide, diphenoxylate, paregoric, and even laudanum are used more frequently for severe diarrhea.
Codeine may be used in cancer pain, but it is associated with increased side effects. The FDA does not recommend use under twelve years of age.
Codeine is administered orally, subcutaneously, intramuscularly or rectally where it is used primarily as an analgesic, often in combination with paracetamol or acetylsalicylic acid. It is also used as an antitussive and antidiarrheal. The use for cough sedation, drying secretions can induce in bronchopathic crisis of respiratory failure. It can cause headache, sedation, depression, euphoria, hypotension, tachycardia, constipation, vomiting. Codeine is toxic, but has an effect ten times less powerful than morphine, therefore it produces physical addiction in a proportional way and causes a low psychological dependence, unless they are individuals already addicted to opiates in the past for which it should be considered a particular attention.
Among the side effects of codeine it can be remembered that it can induce several types of side effects, although not all patients experience them. This depends on the different sensitivity that each individual has towards the drug. Therefore, it is not certain that the adverse effects occur all and with the same intensity in each person.
Listed below are some of the undesirable effects that may arise during treatment with codeine, although these effects may vary depending on the drug taken into consideration, therefore, depending on the pharmaceutical form, the route of administration, the concentration of the active ingredient and the presence of other active ingredients in association.

In general, the use of codeine should be discontinued immediately and the doctor immediately contacted if skin reactions appear which may occur with:
– Itching, hives, skin rash;
– Erythema;
– Erythema multiforme;
– Stevens Johnson Syndrome;
– Toxic epidermal necrolysis;
– Acute generalized exanthematous pustulosis.
On the other hand, allergic reactions can occur with:
– Swelling of the throat;
– Angioedema;
– Hypotension;
– Anaphylactic shock;
– Respiratory depression;
– Changes in heartbeat;
– Confusion;
– Convulsions.
Furthermore, among the other side effects that could occur with the intake of codeine, there are:
– Nausea, vomiting, constipation;
– Acute pancreatitis;
– Sedation and sleepiness;
– Headache;
– Dizziness;
– Asthenia;
– Agitation (mainly – but not exclusively – in elderly patients);
– Changes in mood;
– Miosis;
– Abdominal cramps;
– Respiratory difficulties;
– Urinary retention.
In the event of a codeine overdose it is essential to restore respiratory function immediately. The antidote par excellence, in these cases, is naloxone (an antagonist of the μ-opioid receptors) which must be administered intravenously.
In any case, if you suspect a codeine overdose, you should contact your doctor immediately and go immediately to the nearest hospital.
It should also be remembered that codeine is able to cross the placenta, therefore it could cause harm to the fetus; more specifically, it could cause respiratory depression. For this reason, the drug can be used in pregnant women only in cases of absolute necessity and only under the strict supervision of the doctor.