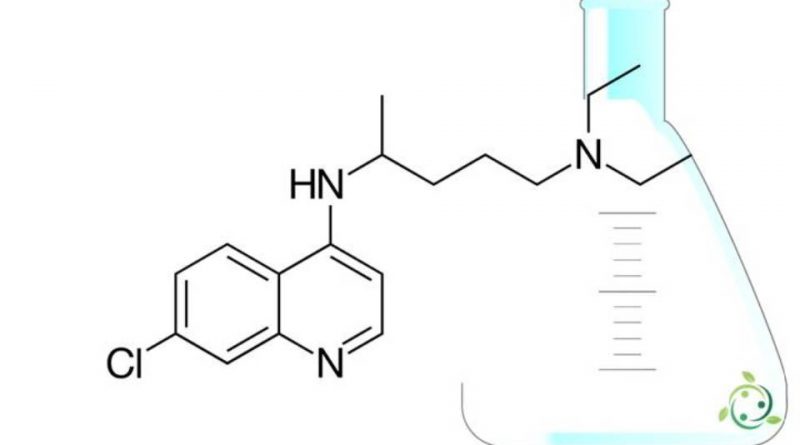 Chloroquine, whose term in the official IUPAC nomenclature is: (RS) -7-Chloro-4- (4-diethyl-amino-1-methylbutylamino) -chinoline is a alkloid with brute or molecular formula C18H26N3Cl.
In the seventeenth century, the indigenous people of Peru used the bark of the cinchona tree (Cinchona officinalis L.) to produce extracts for use in symptoms of chills and fever.
In 1633 this plant was introduced in Europe and used for the same purposes and, subsequently, to be used against malaria.
It was discovered that the antimalarial effects were due to the quinine contained in the plant and this molecule was then isolated from the extract in 1820; chloroquine is an analogous compound.
It was Hans Andersag who in 1934, with his collaborators, discovered chloroquine in the Bayer laboratories.
This discovery was ignored for a decade because it was considered too toxic. During World War II, US-sponsored clinical trials for the development of antimalarial drugs showed that chloroquine had important therapeutic value as an antimalarial.
This brings us to 1947 when chlorine quin was introduced into clinical practice in the prophylactic treatment of malaria.
Thus chlorine quin has long become the main drug in the chemotherapy prophylaxis of malaria.
Currently its use is limited, having been found in recent years an increasing number of resistant strains, especially in Plasmodium falciparum, while it still retains its activity against Plasmodium vivax, Plasmodium ovale, Plasmodium malariae and for the Plasmodium falciparum strains sensitive to the principle. active.

This substance exhibits activity as a heme-polymerase inhibitor and, recently, it has been shown that it is able to interact with the enzyme lactate dehydrogenase of plasmodium. The ability of chloroquine to bind both heme and lactate dehydrogenase causes the drug to be toxic primarily to the parasite.
Chloroquine is sometimes used in the treatment of lupus erythematosus and rheumatoid arthritis as well as for arthritis episodes in children. The appearance of strains resistant to this drug among malaria parasites has shifted the attention of researchers to new uses of this substance, also because it is cheap and easily available.
During 2020, some researchers have identified a possible inhibitory action against HIV and recently COVID-19.
Side effects of chloroquine administration include:
– itching, gastrointestinal disorders, headache and visual disturbances. It also has central nervous system toxicity and can therefore cause convulsions, hallucinations, psychosis, and nightmares.
– Contraindications to administration also include psoriasis, visual disturbances, liver diseases, neurological pathologies, and psychiatric pathologies. Furthermore, chloroquine increases the pH of the endosomes making them less acidic, thus hindering the presentation of intravesicular antigens (eg mycobacteria) and thus making these patients more susceptible to the diseases caused by them.