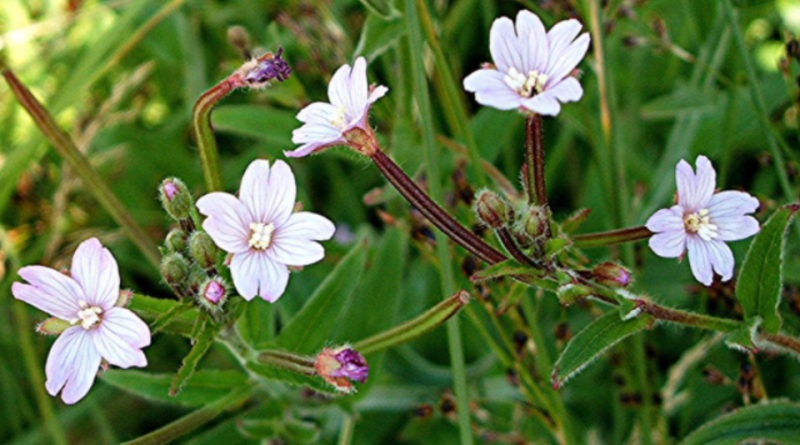 The Hoary willowherb or smallflower hairy willowherb (Epilobium parviflorum Schreb.) Is a herbaceous species belonging to the Onagraceae family.

Etymology –
The term Epilobium comes from the Greek prefix ἐπι- epi- su, above and from λοβóϛ lobós legume, pod (here intended as ipanzio): for the flower positioned at the top of the long ipanzio.
The specific epithet parviflorum comes from small párvus and flos floris Fiore: with small or few flowers.

Geographic Distribution and Habitat –
Epilobium parviflorum is a plant found in most of Europe, including Great Britain, from southern and eastern Sweden, to North Africa and western Asia up to Kashmir, the United States and Canada.
Its habitat is that of marshy areas, meadows and wet mountain slopes, at an average altitude of 0-1,400 meters above sea level, with a more sparse presence at a maximum of 2,500 meters. 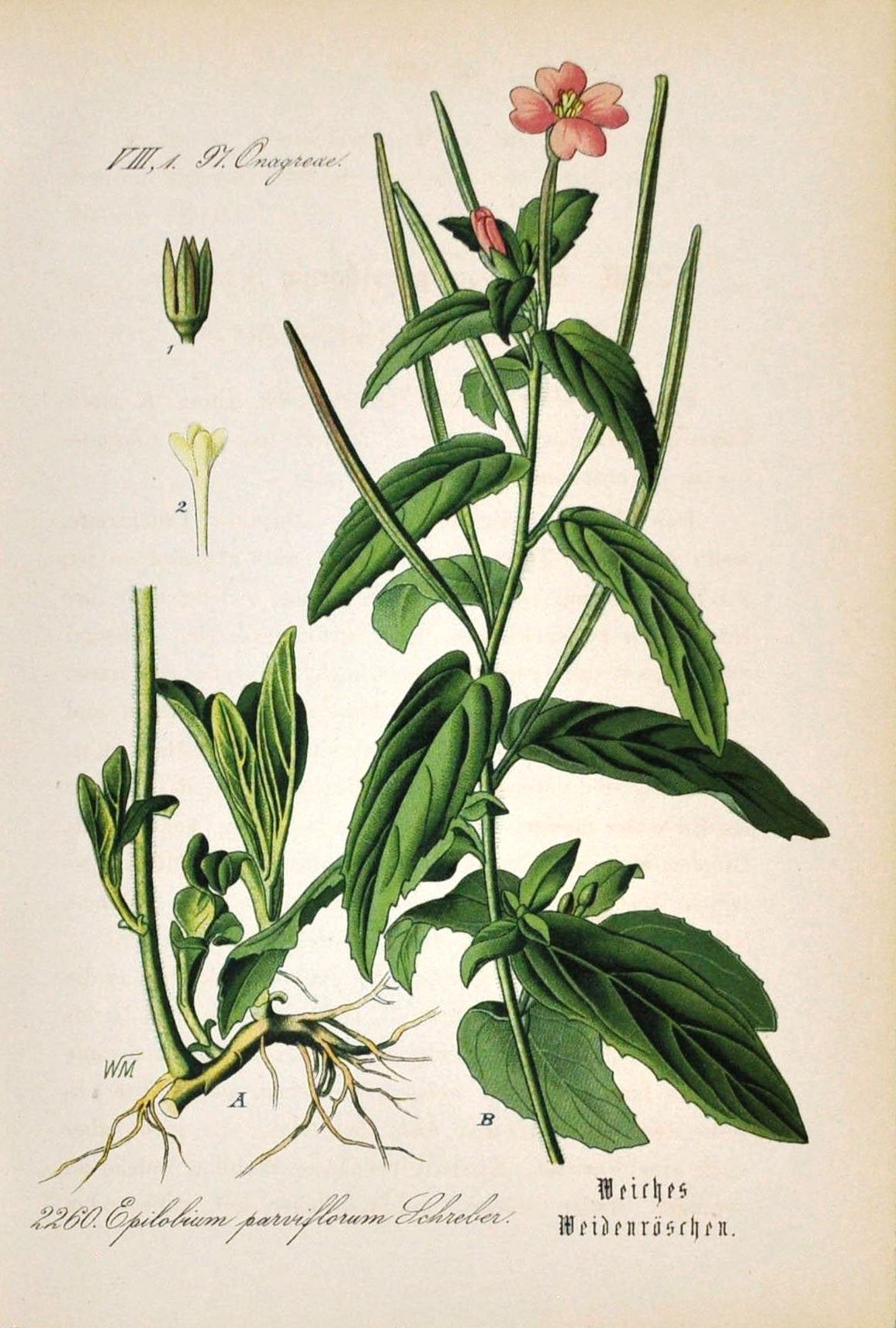 Description –
Epilobium parviflorum is a herbaceous plant that reaches an average of 30-80 centimeters in height.
It has an erecting with densely covered stems covered with heavens, especially in the lower part.
The leaves are opposite, lanceolate and toothed, rounded at the base, 4-10 centimeters long.
The flowers are small, pale pink or pale purple, 6–7 millimeters in diameter, with four petals, eight stamens and a four-lobed stigma. The flowers are hermaphroditic or self-fertilized (autogamy) or pollinated by insects (entomogamy).
The anthesis occurs from June to August in the northern hemisphere.
The fruit is a loculicidal capsule, linear (40) 45-60 mm, greenish with glandular hairs, but glabrescent in the brown or yellowish veins.
The seeds are numerous, obovoid, rounded at the ends, without apical collar, 0.9-1.1 (1.2) mm, of a ± dark brown color, with prominent papillae.

Cultivation –
Epilobium parviflorum is a perennial plant that blooms until August and is known for attracting wildlife.
This species succeeds in most soils but prefers well-drained soil, which retains humidity and in a sunny position or in partial shade.
The flowers attract bees and provide a good late nectar source.
The plant can be propagated by seed by sowing in early spring in situ or as soon as the seed is ripe.
Propagation can also occur by division in spring or autumn. Larger and very easy clumps can be replanted directly into their permanent locations, although it is better to arrange smaller clumps and grow them in a cold greenhouse until they root well and then transplant them in the spring.

Customs and Traditions –
The Hoary willowherb is a plant whose extracts are used in traditional medicine in prostate, bladder and kidney disorders, having an antioxidant and anti-inflammatory action.
Epilobium parviflorum was prescribed internally as a tea in traditional Austrian medicine for the treatment of prostate, kidney, and urinary tract disorders.
It has also been shown that Epilobium extracts inhibit the proliferation of human prostate cells in vitro, influencing cell cycle progression.
In her book “Health from the Lord’s Pharmacy” Maria Treben reports some cases of incredible healings, obtained precisely with the use of Epilobio parviflorum.
Epilobium parviflorum contains many active ingredients; The main constituents are:
– tannins and related compounds (4-14%): eg oenothein B, oenothein A, tri-, tetra- and penta-O-galloylglucose;
– flavonoids (1-2%): kaempferol, quercetin, myricetol, etc .;
– phenolic acids and their derivatives: ellagic acid, valoneic acid dilactone, chlorogenic acid, neochlorogenic acid, coumarinolquinic acids, feruloylquinic acids, gallic acid, cinnamic acid, protocatechuic acid, caffeic acid, ferulic acid, etc .;
– steroids (about 0.4%) and triterpenes (about 1.5%): eg cholesterol, campesterol, stigmasterol, β-sitosterol, ursolic acid, corosolic acid, oleanolic acid;
– other components: for example linoleic acid, palmitic acid, stearic acid, eicosenoic acid, behenic acid, arachidic acid.
Epilobium, as mentioned, has been known and used for years in folk medicine, in the treatment of typical human disorders, such as prostatitis, benign prostatic hypertrophy and all associated urination disorders.
It is very effective in reducing inflammatory states of the urinary tract, such as cystitis and urethritis.
Gallic acid, bioflavonoids and myricetol-3-0-beta-D-glucuronide, all active ingredients naturally contained in the willow herb, exert a powerful anti-edemic and anti-inflammatory action on the prostate and the entire urinary tract, with a strong inhibitory action on prostaglandins.
Epilobium also contains a high percentage of tannins.
Two of these tannins, enotein A and B, have been identified in various scientific studies as the main components responsible for the inhibition of 5-alpha-reductase and aromatase, enzymes that are believed to play a key role in prostate diseases. including prostate cancer.
Preliminary in vitro studies at the Vancouver Prostate Center have shown that very low concentrations of an extract of Epilobium Parviflorum, at the level of micrograms per ml, were found to be among the most effective active ingredients against the development of abnormal cells and the consequent enlarged prostate.
Furthermore, because this plant contains many tannins, it is also useful in case of internal bleeding of various kinds, such as gastric ulcers, bleeding hemorrhoids or in the case of an excessively abundant menstrual cycle.
Also due to the high presence of tannins, it also has an effective anti-diarrheal action, so the epilobium, especially if in association with nettle, is very useful for blocking cases of diarrhea.
Among the contraindications, Epilobium parviflorum is a well tolerated remedy and has no particular contraindications. However, it is recommended not to use it during pregnancy, or while breastfeeding. Finally, it is contraindicated in case of ascertained hypersensitivity to the plant.
The classic method of using epilobium is as a herbal tea and it is the method that also Maria Treben recommends.

Preparation Method –
The Epilobio parviflorum is harvested only and exclusively in a specific period of the year, which corresponds to the flowering period, that is in the height of summer, between July and September.
Flowering corresponds to the balsamic period of the plant, that is the moment in which the epilobium develops its active principles to the maximum.
From this plant stem, leaves and flowers are collected.
This plant can be used for food purposes and in this case raw leaves are used which added to salads have a pleasant taste.
For medicinal uses the most used is herbal tea.
For its preparation, 1 heaped dessert spoon of the herb is taken in 1/4 liter of water; blanch only; let it rest briefly. It is recommended to take no more than two cups a day, in the morning on an empty stomach and in the evening, 1/2 hour before dinner.