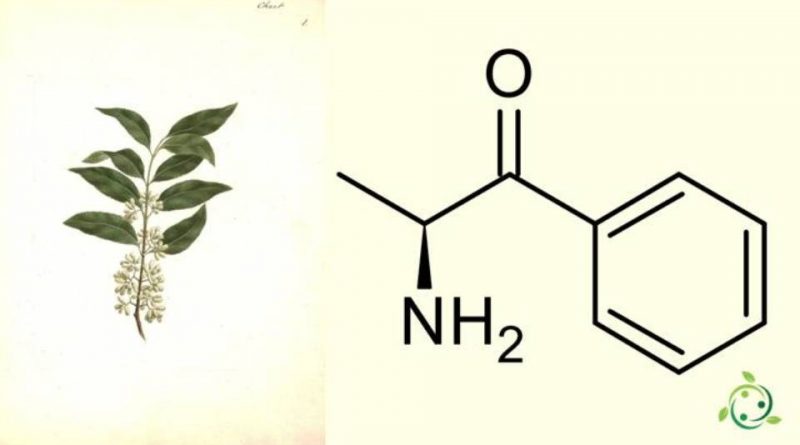 Cathinone or β Ketoamphetamine is an alkaloid whose term in the official IUPAC nomenclature is: (S) -2-Amino-1-phenyl-1-propanone.
Cathinone has a brute or molecular formula: C9H11NO and is naturally present in the leaves of qāt (Catha edulis (Vahl) Forssk. Ex Endl.).
Chemically, cathinone is a monoamine alkaloid, chemically similar to ephedrine, cathine, methacinone and other amphetamines.
This substance is most likely responsible for the stimulating effect of Catha edulis.
The first documentation on Catha edulis, for medical purposes, was in a book published by an Arab doctor in the 10th century. It was used as an antidepressant because it led to feelings of happiness and excitement. Chronic chewing of qat can also lead to drug addiction, as shown by animal studies.
The chewing of the leaves of this plant and the effects of cathinone on the body differ from person to person, but in general there are:
– feelings of euphoria lasting from one to two hours;
– discussion of serious problems and increased irritability;
– the imagination of the chewer is very active.
These manifestations are followed by a depressive phase, irritability, loss of appetite and insomnia.
Among other non-CNS related effects it is reported that people who chew these leaves may develop constipation and heartburn after a session.
Among the long-term effects of cathinone intake can manifest:
gum disease or oral cancer;
– cardiovascular disease and depression.
Cathinone withdrawal symptoms include hot flashes, lethargy, and a strong urge to use the drug for at least the first two days.

Cathinone differs from many other amphetamines in that it has a ketone functional group. Other phenethylamines that share this structure include the stimulants methacinone, MDPV, mephedrone and the antidepressant bupropion.
Cathinone stimulates the release of dopamine and inhibits the recovery of epinephrine, noradrenaline and serotonin in the central nervous system (CNS). These neurotransmitters are all considered monoamines and share the general structure of an aromatic ring and an amino group attached by a two-carbon separator.
Furthermore, since cathinone is a hydrophobic molecule, it can easily cross cell membranes and other barriers, including the blood-brain barrier.
This property allows it to interact with monoamine transporters in the synaptic cleft between neurons. Cathinone induces the release of dopamine from striatal brain preparations that are prelabel with dopamine or its precursors.
It is also reported that the metabolites of cathinone, cathine, and noradedrine also possess CNS stimulation, although they create much weaker effects.
To counteract the effects of cathinone on the body, a dopamine receptor antagonist can be given in advance. The antagonist will keep the neuron in its resting state, which is why cathinone cannot cause extraneous release of dopamine or other neurotransmitters.
Among the other effects of taking cathinone, it should be remembered that this alkaloid can affect the parasympathetic nervous system (PSNS) by blocking adrenergic receptors and inhibiting the contraction of smooth muscle. It can also induce dry mouth, blurred vision, and increases in blood pressure and heart rate.