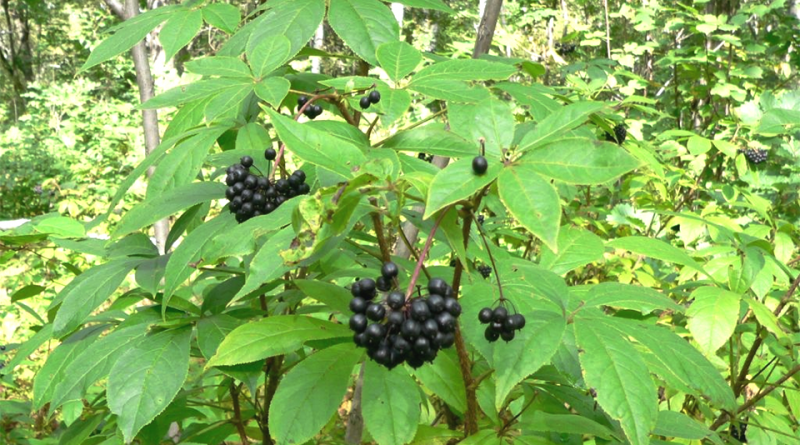 Geographic Distribution and Habitat –
Siberian ginseng is a shrub native to an area between Siberia and Mongolia and is present in East Asia, China, Japan, and Siberia.
Its habitat is that of mixed montane and coniferous forests, which form small undergrowths or groups in thickets and edges. It is sometimes found in oak woods at the foot of cliffs, very rarely in riparian forests of high forest. 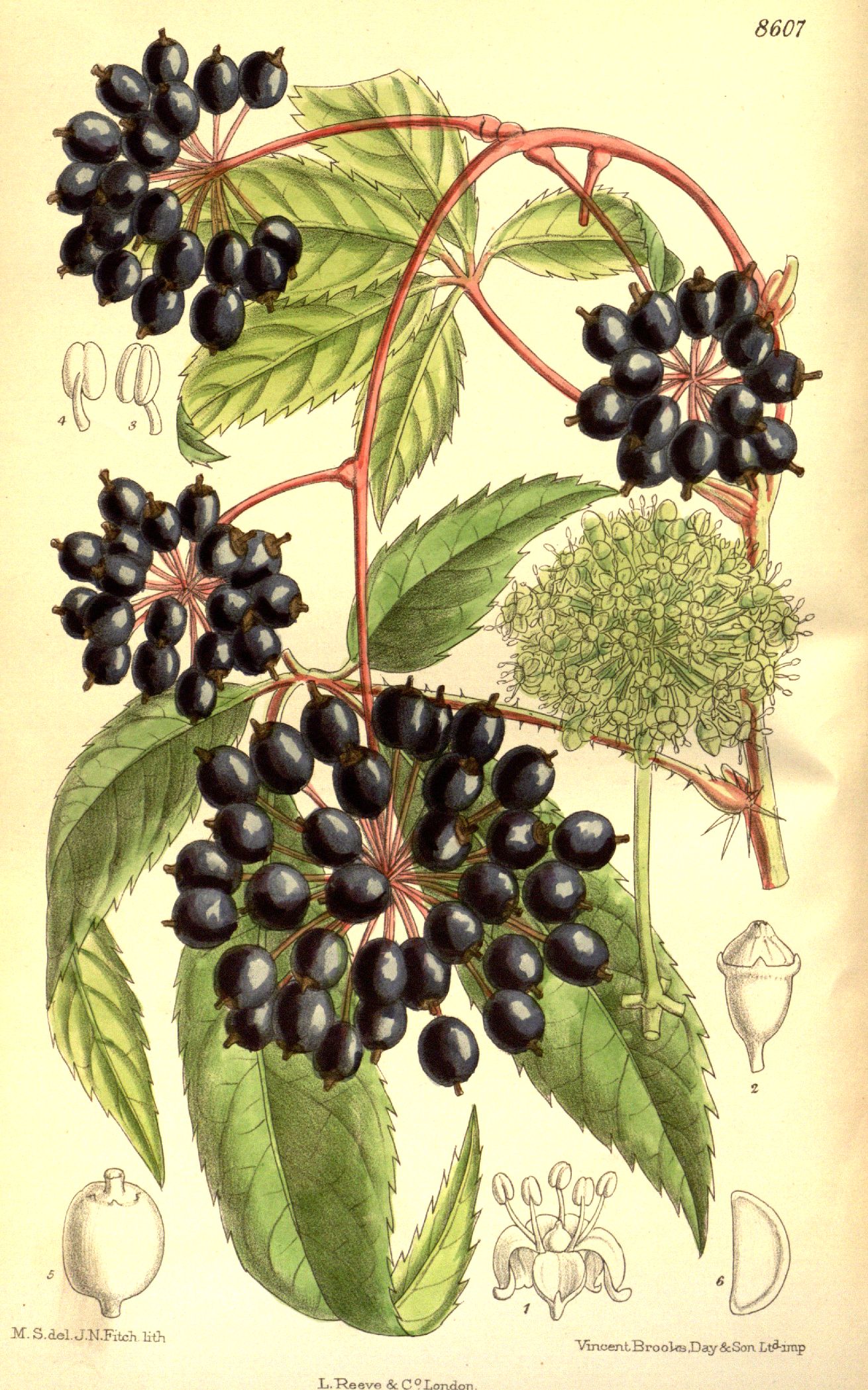 Description –
Elutherococcus senticosus is a deciduous shrub that can grow to a height of 2.00 meters but can also reach 6 meters.
It has branches with long and fine spines, thick, more or less dense depending on the variety.
The leaves are palmate, divided into five leaflets, 5-13 cm long and 3-7 cm wide, elliptical in shape, rather sharp, with a finely serrated margin, without hairs on the upper surface but with presence on the central nerve of the lower side ; these are carried by a long petiole up to 12 cm (sometimes in diameter), sometimes covered with thorns.
The flowers are small and grouped in terminal, simple or compound, globose umbels. Female flowers are yellowish, while male flowers are purplish.
The fruit is a black berry.

Cultivation –
Siberian ginseng is a plant that prefers a light, warm, loamy, humus-rich soil, and a location sheltered from the north and east winds. The substrate must be well drained and also grows in polluted and dusty urban locations.
Plants withstand at least -15 ° C if they are sheltered from cold winds.
It is a highly polymorphic species and is grown as a medicinal plant in Russia and China.
Propagation is done by seed that is sown as soon as it is ripe in autumn, in a cold greenhouse.
The seed may be slow to germinate. The stored seed requires 6 months of heat followed by 3 months of cold stratification.
After the emergence of the seedlings, it is recommended to thin them out and they will be transplanted when they are large enough to be handled and grown in a shady place or in a greenhouse for at least the first winter. It should then be planted in its final position in late spring or early summer.
Propagation can also occur for semi-mature wood cuttings, in the mid-summer period, in a covered and shaded place, taking 15-30 branch portions.
This plant is also harvested in its natural state for local use as food and for medicinal use.

Customs and Traditions –
Siberian ginseng is a powerful tonic herb with a significant amount of health benefits. Unlike many herbs with medicinal use, it is more useful for maintaining good health than as a curative effect.
Research has shown that stimulates resistance to stress and therefore is now widely used as a tonic in times of stress and pressure. This plant is a popular treatment commonly used in China and Russia where it is used as a substitute for ginseng.
It is a pungent bittersweet flavored herb that is said to be stronger in its action than ginseng.
Regular use is said to restore vigor, improve memory and increase longevity.
The root and bark of the root are adaptogenic, anti-inflammatory, hypoglycemic, tonic and vasodilating. It is taken internally during convalescence and in the treatment of menopausal problems, geriatric weakness, physical and mental stress, etc.
In general, it is a herb that strengthens the body’s natural immune system.
It has also been used to combat radiation sickness and exposure to toxic chemicals.
In general this herb is not prescribed for children and should not be used for more than 3 weeks simultaneously; also one should not take caffeine when using this herb.
The root of Eleutherococcus senticosus is used in herbal medicine in the form of drops or tablets as it is recognized tonic and adaptogenic properties, able to optimize the secretion of hormones.
The use of the plant is indicated in stress and overexertion states; as mentioned it strengthens the immune system, increasing the number of T lymphocytes and stimulating the activity of white blood cells, it is useful in asthenia, convalescence, psychophysical exhaustion, fatigue, hypotension, sports activity, prevents the onset of diseases, indicated in periods of reduced capacity for performance, concentration and attention, stimulates the metabolism and helps in spasmophilia. A recent Japanese study found that it helps improve resistance to cold and exertion.
Furthermore, in the last few decades, researchers around the world have conducted systematic investigations of this herb, from chemistry to pharmacology, and a large number of chemical components have been characterized for their significant pharmacological effects. However, reports of this plant’s anticancer effects had been rare until recently, when considerable in vitro and in vivo pharmacological experiments were conducted to study the anticancer effects of this herb.
Among the contraindications, it should be remembered that, in excessive doses, it could cause headache, tension and insomnia.
The active ingredients responsible for the health properties of Eleutherococcus senticosus are concentrated in the root and belong mainly to the category of glycosides. These substances – also known as eleutherosides and designated by letters ranging from A to M – have a varied chemical nature. There are also saponin compounds (triterpenes and sterols), coumarins, flavonoids and polysaccharides (eleutherans).
Regarding the chemical composition of Eleutherococcus senticosus, it was not possible to attribute the adaptogenic action to a single compound; therefore, as often happens in the phytotherapeutic field, this action is of a synergistic nature and is attributable to the entire phytocomplex.

Preparation mode –
To use this plant, the roots are used, which are harvested in autumn and dried for later use.
Edible uses are also known; in this case both young leaves and cooked shoots are used.
Dried leaves are then used as a tea substitute.