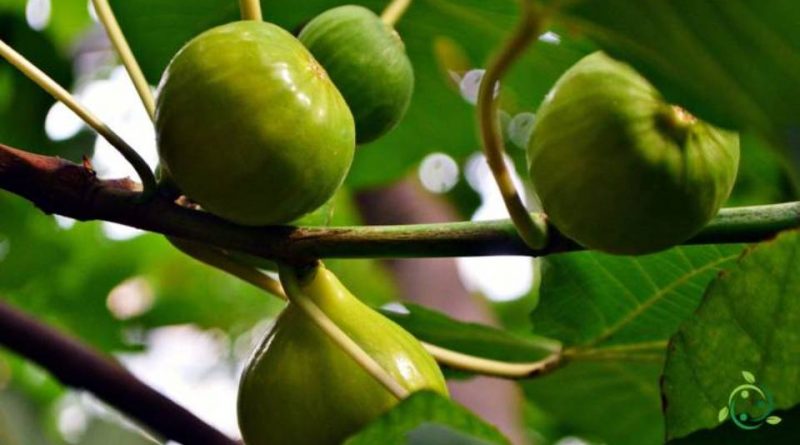 The common fig tree (Ficus carica L., 1753) is a fruit tree of the Moraceae family native to western Asia, introduced since time immemorial in the Mediterranean area. In Italy it is present in both specialized and consociated form, especially in Apulia, Campania and Calabria.
This species is present in two botanical forms which, in a simplified way, we can define as male plants and female plants, since the first (male or caprific) constitutes the individual who produces pollen with inedible fruits, while the second or fig true (female) produces edible fruits and seeds contained in the fruits.
The house fig has only long-styled female flowers and produces two types of fruit:
– fioroni or early figs: they form in autumn, ripen in the late spring of the following year and have sterile female flowers;
– real figs: they are formed in spring, ripen in late summer of the same year and bear fertile or sterile female flowers depending on the variety.
In this plant the formation of the fruits can take place both by parthenocarpy and by fertilization; in the latter case the fertilization, called “caprification”, is ensured by a small hymenoptera of about two millimeters (Blastophaga psenes Linnaeus, 1758).
In the caprific, we find both male and female flowers and, depending on the period, they can form:
– mothers (produced in winter with only aborted female flowers;
– profichi (produced in spring with aborted female flowers and male flowers near the ostiole);
– mammals (present in sterile and fertile female flowers in addition to male ones).
The achenes, that is the true fruits, are gathered in a fleshy syconium. The common edible fruit is the syconium of the female cultivars only. The shape is variable, from flattened spherical to pyriform-elongated. The skin color is greenish-white and black.

Period of pruning –
The pruning of fig plants must take into account this complexity and the physiology of the species.
The period is also dependent on the type of intervention we have to carry out. In general, the best time is the end of winter, after the last frosts, but there are also other periods of the year during which it is possible to carry out pruning. This is the case, for example, of the period between the months of September and October, which is ideal for removing suckers with the intention of making cuttings. The cuttings, in fact, are a perfect solution for a rapid propagation of the fig. In the summer, on the other hand, “scacchatura” can be performed, which consists in removing the superfluous shoots that prevent the growth of other shoots.
Recall that the domestic fig propagates both by cutting (using 2-3 year old branches), and by rooted sucker. It can be grafted if you want to change variety (bud or crown graft).
For the details of the cultivation technique, see the following sheet.

Cultivar –
As far as the cultivar of the caprat is concerned are a few dozen, while those of the domestic fig are in the hundreds. Given the family and cultivation nature of the fig many of these are very ancient, locally grown, and often little known and, moreover, the classification is more complex as the cases of synonyms and homonyms are very common.
In general, however, cultivars are classified according to:
– number of annual fruiting: uniform (they have only one main production, of “supplied”); biferee (they have an early production of “floroni”, in addition to the main one); trifere, very little widespread (they have an early production, the main one, and a late one);
– susceptibility to caprification: caprific uniforms (production of supplied by caprification); non-caprificable unifera and biferae (production of fioroni and supplied in the absence of caprification); intermediate biferae (caprificable for supplied and fioroni via parthenocarpic);
– ripening period: not variable for fioroni (mid-June-July); for the products supplied (real figs) there are early (ripening within August) and late (ripening from September onwards) cultivars;
– skin color: white figs (green to greenish-yellow color); black or violet figs (with brown to violet red or blackish-purple skin);
– production destination: for fresh consumption (all cultivars); for drying (cultivars characterized by early ripening, with the production of whites, intact, resistant and elastic skin, dense and sugary pulp).
Moreover, the cultivars often have a territorial diffusion, with marked differences from country to country:
– In Italy the most representative are: different types of early fig (Columbri), Brogiotti (both white and black), the widespread Dottato, as well as Troiano, White fig from Cilento, Gentile, etc. Particularly suited to drying are Dottato, Fico Bianco del Cilento, Farà and Taurisano;
– in France, mainly Blanquette, Bourjassotte (white or black), Dauphine, Col de Dame, etc. are grown.
– in Greece, another country where this plant is widespread, the most common variety is Smyrna, very suitable for drying;
– in Portugal among others we mention: Lampeira, Lampa Preta, Pingo de mel Princesa;
– in Spain, various types of Blanca, Negra, Coll de Dama, Napolitan are widespread. The latter, together with Pajajero and Martinenca, is suitable for drying.