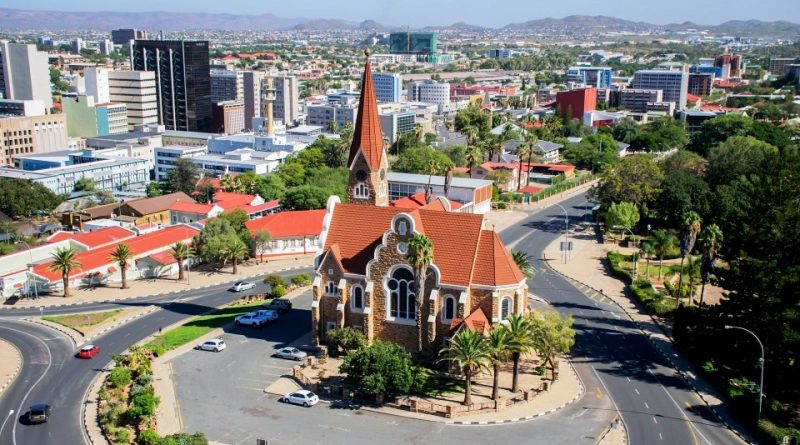 Namibia is a state of southern Africa, whose capital is Windhoek.
Namibia north borders with Angola and Zambia, Botswana to the east and South Africa to the south; to the west it overlooks the Atlantic Ocean.
This state has a population of about 2.700,000 inhabitants and an overall extension of 825,418 km².
The capital of Namibia is Windhoek, which counted in 2011 about 380,000 inhabitants; Other important cities, besides the capital, are: the ports of Walvis Bay and Swakopmund, and the cities of Oshakati, Grootfontein, Tsumeb and Keetmanshoop.
Much of the country’s territory consists of the arid expanses of the Namib Desert (hence the name) and the Kalahari.
Namibia is one of the youngest nations on the African continent, having only obtained independence from South Africa in 1990, from which it was administered.
Previously, from 1884 to 1919 it was a colony of the German Empire under the name Deutsch-Südwestafrika. Subsequently it was part of the British Empire within the South African Union until 1961 and then became, until independence, a province of the South African Republic.

Geography –
Namibia is characterized by a series of plateaus, the highest point of which is the Brandberg (2,606 meters). The central plateau crosses the country along the north-south axis, and is surrounded to the west by the Namib Desert and the plains that reach the coast, to the south by the Orange River, to the south and east by the Kalahari Desert. The borders of the country to the north-east delimit a narrow strip of land, known as the Caprivi finger, which was obtained by the Germans as an outlet to the Zambezi River. As for hydrography, due to the persistent aridity, most of the rivers are torrential. The largest rivers are only along the borders: from north to south, the main rivers are the Kunene, the Okavango, the Zambezi and the Orange.
This country has a climate ranging from desert to subtropical, and is generally hot and dry, with little and variable rainfall. The aridity of the climate derives from the cold Benguela current which causes condensation of water vapor on the Atlantic Ocean, leaving dry air arriving on the coast.
The flora and fauna of Namibia are characterized and widely diversified according to the different climatic zones that cross the country.

Flora –
Among the most unusual plants we should mention Welwitschia mirabilis, endemic to the Angola desert, considered one of the oldest and longest-lived plants in existence (some specimens are more than 2,000 years old); it is found in abundance in some areas of the Namib desert.
Among the more than 100 species of trees in Namibia we can mention the Acacia erioloba, the Faidherbia albida, the mopane, the Terminalia, the marula, the giant fig and the African baobab. The national tree is Aloe dichotoma, called kokerboom (“quiver tree”) because the San empty the branches of the plant to make them containers for their arrows. With their bare branches, which end in narrow, pointed leaves, these plants give rise to some very unusual landscapes (like that of the Quiver Tree Forest, in the south of the country). There are numerous succulent plants called “flowering rocks”. A species of “elephant foot” (Pachypodium) is also found in Namibia. The Okavango area is home to swamp grasses, papyrus and water lilies. There is no shortage of areas covered by savannah (in particular in the Etosha National Park). Endemic to the Namib is also Acanthosicyos horrida, a plant with long thorns that produces fruits similar to small melons, an important food for desert animals (for example ostriches) but also edible for humans. Endemic to the same areas is the shrub Zygophyllum stapffii, called the “thaler plant” because the leaves look like gold coins. Euphorbia damarana is very widespread, a shrubby plant with an extremely toxic sap, which was used by the Bushmen to poison their arrows.
In addition, the cold Benguela Current brings to the surface large amounts of nutrients that support high amounts of phytoplankton and large kelp forests.

Fauna –
The fauna of Namibia has suffered greatly from the big game hunts organized by Europeans between the end of the 19th and the beginning of the 20th century. Most of the fauna of Sub-Saharan Africa is still represented, and numerous endemic species are present in the Namib.
The big African cats are all present; In particular, the wild is still widespread especially in the area of ​​the Waterberg plateau, despite the expansion of farms. There are also numerous small carnivores, such as wild cats, genets, meerkats, otocioni, jackals and mellivores. Antelopes and gazelles are present in abundance even outside the protected natural areas; among the most common we can mention the gemsbock oryx, the springbok, the greater kudu and the impala. Other herbivores include giraffes, zebras, warthogs, and elephants. After an almost total disappearance, the white rhinos were reintroduced into the Etosha National Park with excellent results, so much so that today the Etosha is qualified as a donor, that is, it sells rhinos to other reserves. Some black rhinos are also found in Damaraland. In Namibia there is also a bream and along the coasts, thanks to the nutrients brought to the surface by the cold Benguela current, there is a rich ecosystem that manages to support many marine mammals, including several species of dolphins. From Walvis Bay going north there are many colonies of sea lions, the largest of which is at Cape Cross.
Among the endemic or near endemic species or subspecies we can mention Hartmann’s mountain zebra, the Angolan giraffe, the black-faced impala, the brown hyena and the desert rhinos. The famous desert elephants are not an independent subspecies compared to the African elephant, but have a typical physical conformation, adapted to the environment of the Namib.
Typical snakes in the area include the Namib horned viper, two species of mamba, the zebra snake and others. A rather common sight on the scorching sand of the Namib is the very fast run of the Aprosaura achietae lizards, which move by jumping from one leg to the other, almost without touching the ground.
Among the bird species we can mention the white pelican, Gray’s lark, the bandacastana courier, the lilac-breasted jay, the pygmy goose, various species of parrots, the fish owl, the African fish eagle (represented also in the Namibian coat of arms), the Damara tern and the Kori bustard. The huge colonial nests of the weaving birds are also spectacular, in each of which hundreds of specimens live together.
Among the endemic species it is important to point out the golden cave catfish which lives exclusively in the Aigamas cave which houses a large amount of fossil water under the soil.
Finally, the invertebrates. The fauna of Namibia includes many species of marine and terrestrial invertebrates. The Namib desert hosts a very large number of endemic arthropods, adapted to the very particular climatic conditions; among these stand out some genera of tenebrionids collectively known as mist beetles.