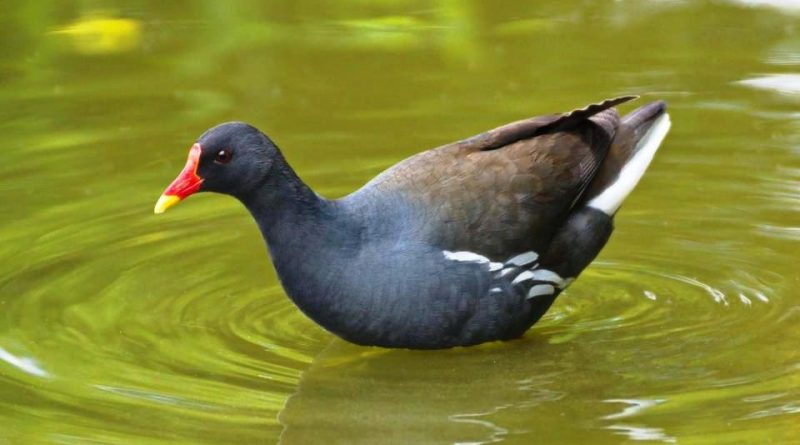 The Common moorhen (Gallinula chloropus Linnaeus, 1758) is a bird belonging to the Rallidae family.

Geographic Distribution and Habitat –
The Common moorhen is a bird spread over a vast range comprising Europe, Africa and Asia; in fact it is found all over the world except the Poles and Australia.
This species nests and is sedentary in central, southern and western Europe; instead, it is a summer breeder in Eastern Europe.
Its habitat is that of humid places, such as ponds, lakes, canals and ditches and in general damp soils and waters that flow slowly with the presence of many aquatic plants. 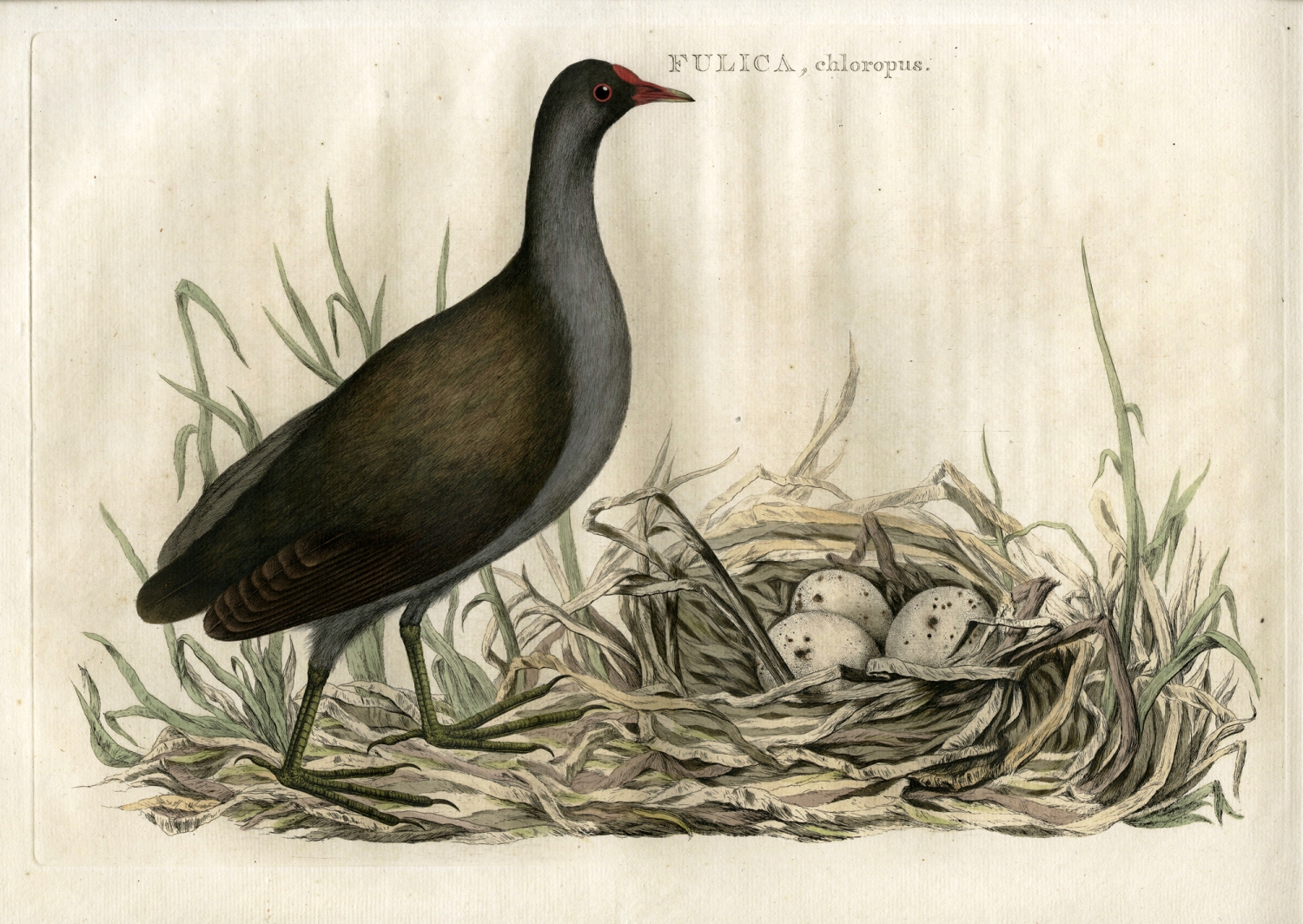 Description –
Gallinula chloropus is a medium-sized bird, with a length of 32 – 35 cm, a wingspan of 50 – 55 cm and with a slight sexual dimorphism mainly related to the size; in the male it has a weight of 250 – 400 grams while in the female of 260 – 370 gr.
The adults are recognized for having the upper parts of dark brown-olive color, the neck and the head are black, the lower parts gray, with white streaks on the sides; the beak is red with a yellow tip and a red front plate; the legs are yellow, the undertail is white.
The closed wings have a stripe of white feathers.
The adult livery is very similar, the beak is a duller red like the shield on the forehead and the yellowish tip.
In the young specimens, the upper parts are dark olive-brown, the head and neck gray, with the white throat flecked with black; the lower parts are gray, with a white patch in the center of the chest, and white streaks on the flanks. The beak is dark red, the legs are dark green and very long toes.
The chicks of the nest are precocious and are covered with fluff, thick, short and black on the head and on the wings, the skin of the head and above the eyes is pink and blue, that of the pink wings, the red beak with the yellow tip, the blackish-green paws.
She is a skilled swimmer; the movement in the water is characteristic because it proceeds in jerks; rather heavy flight.
This bird’s song is like a hoarse, harsh, croaking sound. Before and during the breeding season, it emits rhythmic and varied cries, often confused with those of the barn owl.

Biology –
The reproduction cycle begins with the construction of a dome-shaped nest, which is built in the thick of the aquatic vegetation preferably near the shore but also on precarious islets, or on the shore of the watercourse.
Along with the nest is built a kind of ramp that leads from the nest to the water and sometimes the couple also builds a cover over the nest to hide it.
In this nest the females lay five to ten light brown eggs spotted with darker patches. The eggs are hatched for a period of over twenty days.
There can be 2 or 3 litters a year, between April and July.
The chicks are precocious nidifuges, they cover themselves with feathers in 40 – 50 days and follow the mother by whom they are cared for for a few weeks. The young can be preyed upon by the gray heron.

Ecological Role –
The Common moorhen is a sedentary species and if it migrates it does so for short distances. In Italy it is sedentary and nesting in wetlands, but also partially migratory and wintering.
This species is omnivorous and feeds on aquatic vegetation and relative seeds and fruits, but also on insects and molluscs.
If frightened it emits a characteristic call; this behavior allows the census of the animals even when they are hidden from view.
According to the IUCN it is a species of minimal concern even if it could be affected by the decrease and destruction of the nesting habitats which are, as mentioned, the freshwater wetlands.
The Italian population is estimated at 100,000-150,000 pairs and is considered stable (BirdLife International 2004, Brichetti & Fracasso 2004); the trend of the population is, the moment, stable.