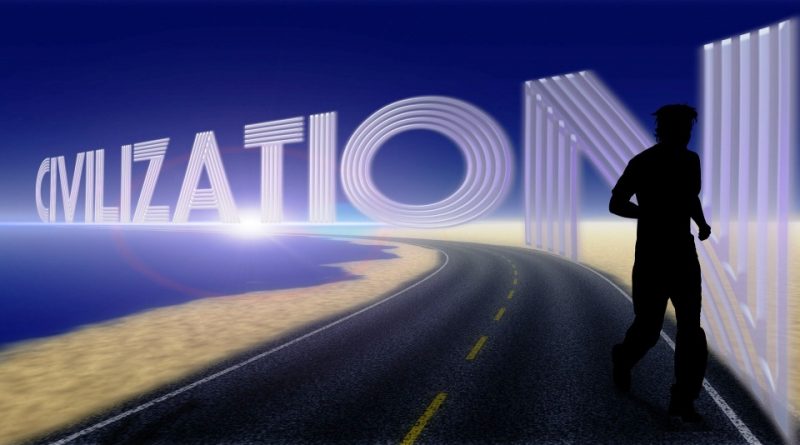 With Western Civilization we mean a geographical and cultural area that roughly includes Europe and, in a broader sense, all those European and non-European countries that today have common cultural, economic, commercial or political traits.
These cultural traits have gradually been generated and consolidated on the basis of various historical moments which, from Greek-Roman origins, reach the Enlightenment and then, through positivism, to the present day.
A civilization possible as long as the Planet was the place of expansion and export of its cultural, economic, commercial, and political beliefs.
A civilization that had never planned a possible tomorrow, just as at the time of Roman domination its decay was the consequence of an empire greater than its ability to manage itself.
With similar behavior, Western civilization has traced, albeit with obvious historical and geographical differences, this ancient defect; a lack of presumption and, often, arrogance, in considering one’s own way of thinking valid; true and worthy of being exported its identity, to the point of celebrating the excesses perpetrated between the two world wars and the genocides in the name of an economic and commercial colonialism that is often ruthless and without rules.
At the end of the twentieth century, however, all the data and emergencies created by this civilization had made it clear that there was no longer a future in this way. A century where globalization, expected by many financial operators as the ultimate affirmation of their beliefs and objectives, had placed concrete and unsolvable questions from the logic of Western thought.
It would seem paradoxical, but it is precisely globalization that had begun to present the accounts to Western colonial civilization and to show a new equation.
In this new scenario of interdependence of national policies and their repercussions, a series of cultural and economic paradoxes on which, for centuries, we Westerners have based almost every creed have emerged at an ever increasing, almost exponential rate.
Thus globalization and social and environmental emergencies, increasingly apparent, are showing us not so much a future full of unknowns but above all a future that is not possible and unsuitable for hosting this model of civilization. It is a truth not only and as philosophical as it is above all mathematical (and mathematics is not an opinion); every year the famous Earth Overshoot Day, the day when the human need for resources exceeds the regenerative capacity of the planet, falls ever before.
According to the calculations of the Global Footprint Network, already in 2012, to renew the resources we burn over the 12 months, it took at least a planet and a half: “At this rate, before the middle of this century, every year we will consume the quantity of resources produced by two planets ”.

In spite of the Kyoto Protocol, the Paris Agreements, the 2030 Agenda (actually still largely to be implemented) we are unable to reverse this process; because?
The answer is simpler than one might expect.
Our cultural, economic, commercial or political model is not compliant or, if you prefer, synchronous with the principles of the Planet and its Nature.
It is not just a problem of how much we consume but how we relate to the economics of the ecosystem, its rules, its principles.
Our model of consumption and use of the Planet’s goods does not follow its rules. Our agricultural production model does not respond to ecological principles but to market logic; our industrial system is not based on renewable resources but, often, on false principles of sustainability; our transportation and mobility system cannot be supported by any planet, and so forth.
There is no longer any place for this kind of civilization, built on large megacities and immense shanty towns, on unsustainable commercial exchanges, on short-sighted and impractical models of production and exploitation of resources.
For the avoidance of doubt, the social well-being of a civilization is not in question; Regardless of the fact that this social model has generated few rich and too many poor and incredible suffering, the end of civilization is not feared but of this model of civilization.
We are not at the end of history, but at the end of the history of this civilization.
There is no prospect of a return to a Middle Ages of poverty and injustice. On the contrary, one must project ourselves to an era of real well-being, based on the geographical and ecological justice of one’s behavior.
To do this, many rules must be changed: from the illusion of a free market that does not respond to ethical principles (which is a thermodynamic utopia) to a shorter-range social and commercial system, to political and economic models based on the same efficiency as those ecological, which base their strength and stability on diversity, on sharing, on sharing, on co-responsibility.
All this makes us understand that with the end of Western civilization the gradual death of capitalism is decreeing, as it is structured today, in favor of a model of Circular Economy that contains in itself a conversion to the way of thinking about consumption, trade. , to profits and to wealth ratios, totally different.
There is, of course, a long (but historically short) period of transition. A change that is neither painless nor easy and obvious.
What is the catalyst for this to happen in the shortest possible and most virtuous way?
We must get out of the cage in which Western culture and, with it, the Enlightenment vision has closed us, to open ourselves to a perspective of greater depth than the arid and very dangerous one of capitalist colonialism that devours everything and, in recent times, is devouring himself.
We must stop thinking about the policy of support funds and financial interventions as the engine of change; it is quite the opposite.
We need to work on new rules, on new principles, on a new way of doing politics, so simple and “as old as the mountains” because it is contained in the codes of Nature.