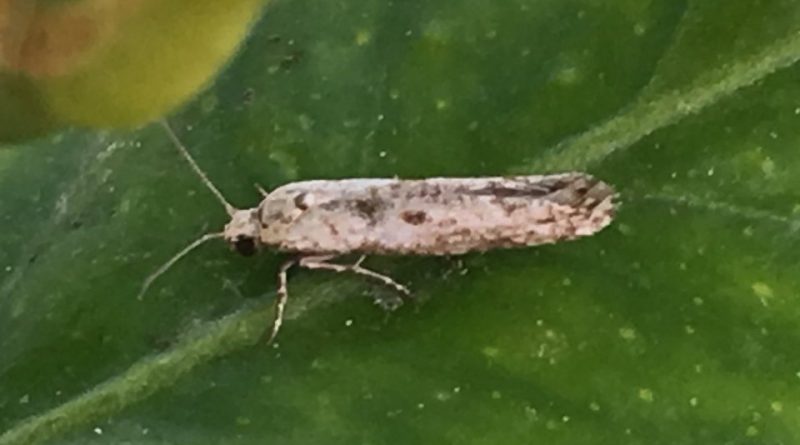 Geographic Distribution and Habitat –
The Citrus blossom moth is an insect widespread especially in southern Europe, widespread in citrus-growing areas and whose larvae feed on Citrus species such as Citrus limon, a little less than Citrus decumana, Citrus aurantium and others.

Morphology –
Prays citri is a small butterfly in which adults have a wingspan of 10-12 mm.
Adults are gray in color, with relatively short antennae, strongly fringed wings, especially the posterior ones and the anterior ones at the margin; the anterior ones are of brownish gray color knurled; the hind wings are very narrow, uniform brown gray and smoky gray towards the end.
The larvae are discolored and very small when the egg hatches; they measure 6.5 mm in length and 1.8 in width at the end of growth. These have a light, brownish, or whitish body with a darker head and thoracic plate.
The chrysalis is found in a very soft, white and sharp cocoon.
The eggs are convex oval in size, 0.15 to 0.2 mm in size, opalescent with a finely reticulated chorion.

Attitude and Life Cycle –
The Citrus blossom moth overwinters at the chrysalis stage in silky cocoons, or as a larva and finally as an egg or adult depending on the climatic trend.
Oviposition begins in spring and occurs on flower buds; development time from egg to adult is variable; in the summer, a generation is completed in about a month.
There are several generations in the course of the year, with up to 10 to 11 generations in some cases.
The complete evolution of the insect takes place in less than 30 days during the summer months, and in 60 days in winter. Moreover, due to annual generations, Prays citri meets at all stages during all months of the year.
The adults feed on sap and fly at dusk and during the day, resting on the host plants.
Mating takes place shortly after exiting. A few hours later, the female lays 1 to 3 eggs on a flower button and then moves on to others. The total fecundity observed is 60 – 150 eggs. Once the egg has hatched, the young larva penetrates inside the floral button and devours the folded floral organs. Then, it comes out of a circular side hole and gains another floral button that engraves in the same way. It weaves silk threads that resemble the attached inflorescences. It then attaches to the young fruit into which it penetrates laterally from the receptacle. Depending on the season, it feeds equally on tender shoots and young leaves which it agglutinates in its web. It also penetrates into ripe fruit by piercing a tunnel the thickness of the cuticle.
In case of high infestations, evident damage may occur, especially to the flower buds and already open flowers. The mechanism is that of penetration of the larvae into the flowers, bringing together with silky threads, nibbling the inside, up to the ovary. Attacks can cause the loss of flower buds that are subject to dripping. The larvae can attack the shoots and small fruits, on which erosions appear, emptying them and causing their fall.

Ecological Role –
In case of high infestation of Prays citri, economic damage to agricultural crops can occur, including, in particular, to Citrus limon. The damage is mainly borne by flower buds and already open flowers. Very serious attacks can cause the loss of flower buds which are subject to dripping.
The larvae can attack, even if more rarely, the shoots and the small fruits, on which they erode, emptying them and determining their drop; At times ripe fruits can be attacked, even if with less gravity, compromising their conservation.
The fight against Prays citri was once predominantly chemical; these interventions temporarily resolved the high infestations but caused serious damage to the biocoenoses of useful insects and fauna in general (especially birds and small mammals).
For this reason, the interventions must be of a different nature, such as that of the grassing of citrus groves, the choice of less dense sixths, pruning that allow less shading of the foliage, the presence of areas of refuge for predators and parasitoids (such as dry stone walls , where possible) and the absolute ban on the use of nitric fertilizers.
Among other things, the species is controlled in nature, at the egg or larva stage, especially by various Chalcidoid Hymenoptera; among these, Ageniaspis fuscicollis, endo-parasitoid of the larvae, is of particular importance.
It is therefore necessary to intervene with insecticides, if necessary, of natural origin such as pyrethrum. The intervention must be done taking care against the most damaging periods that coincide with flowering, in the spring period and then in late summer, between August and September.
The periods in which treatments can be carried out are precisely these indicated and are performed with closed flowers and only in case of massive infestations.
The chemical fight must therefore be guided and the monitoring of the populations is carried out with:
– Sexual traps: these provide indications on the flight curves and allow to establish the best time for surgery. However, it should be noted that not always a high% of catches is an indication of strong infestation and real damage; in fact it is necessary to keep in mind the phenological moment of the plants. The attack on the shoots is generally tolerated by the plants; while at times in the presence of abundant flowering even an attack of about half of the flowers still does not justify the intervention. Sex traps can also be used for partial massive capture aimed at lowering the potential for infestation;
– visual samplings: they are useful for establishing the degree of presence of the pest; it intervenes when the infestation exceeds 15% of the flower buds or 2-3% of the fruit trees.
Finally, it should be remembered that Bacillus thuringiensis ssp can be used against the larvae, under certain operating conditions. kurstaki.