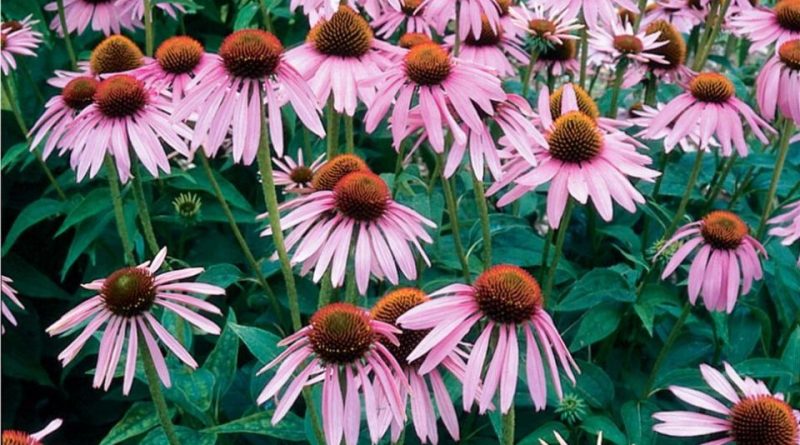 Etymology –
The term Echinacea comes from the Greek ῖχῖνος echînos urchin, porcupine, sea urchin and, by extension, thorny: in reference to the thorny scales of the receptacle.
The specific purpurea epithet comes from the Greek πορφύρεος porphýreos of purple red color, due to the color of the flowers.

Geographic Distribution and Habitat –
Echinacea purpurea is a plant native to North America. Its range goes from Virginia to Ohio and Michigan, reaching as far south as Georgia and Louisiana.
Its habitat is that of dry open woods, grasslands and swamps, especially near waterways; at altitudes between 10 and 400 meters or more. 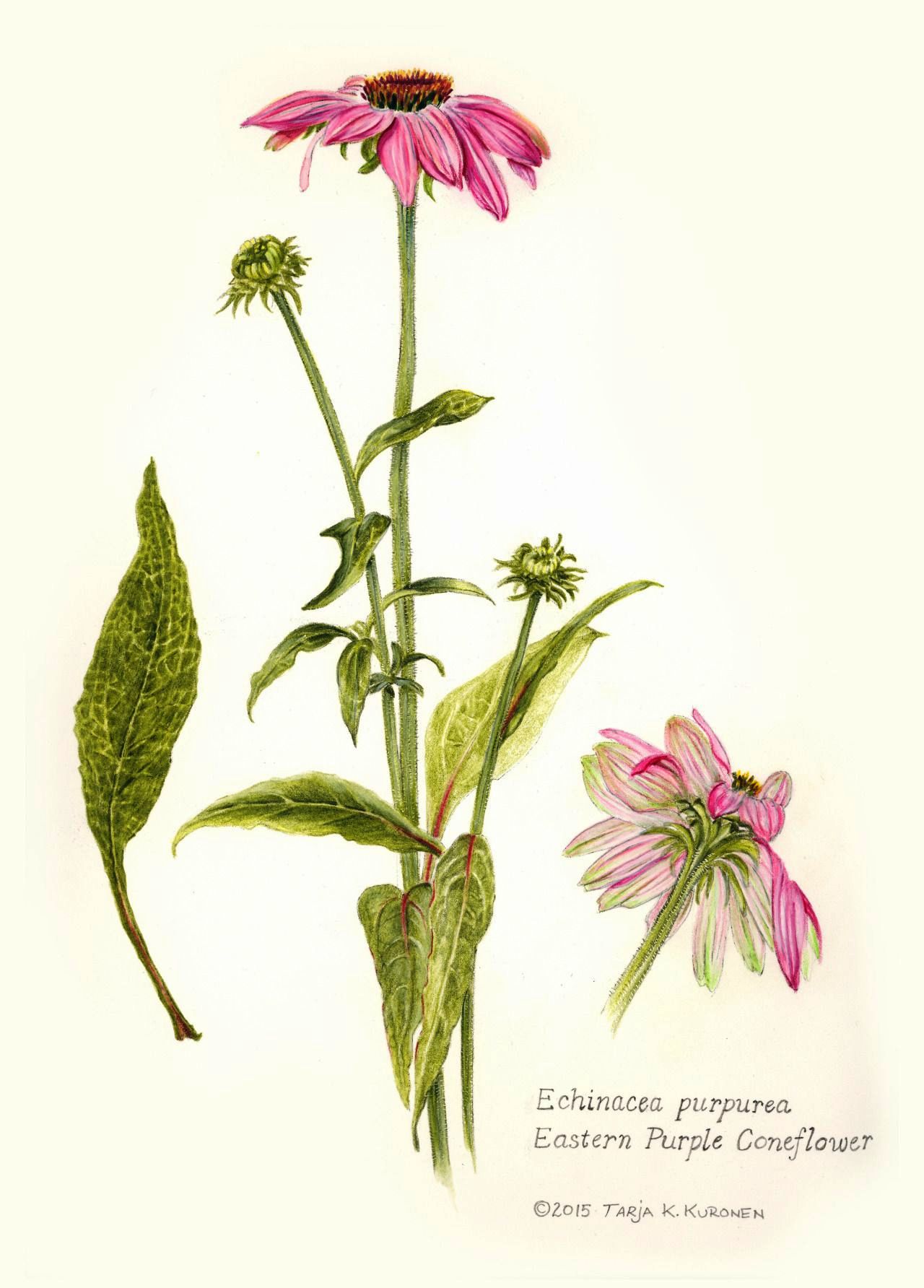 Description –
The Eastern purple coneflower is a perennial herbaceous plant that produces a cluster of erect and branched stems 50 – 120 cm high.
The stem is green or mottled with purple and green.
The plant develops from a deep-shaped taproot, wider in the center and narrowing at the ends.
The leaves have an elongated lanceolate or linear-lanceolate form with three veins.
The flowers are flower heads, with narrow, linear, elongated and hanging petals, ranging from 2.5 to 7.6 cm in length. The petals are purplish in color.
The antesis is from May to July.
The fruits are cypsele of light brown or bicolor color with angled edges.

Cultivation –
Echinacea purpurea is a very cold hardy plant, tolerating winter temperatures down to about -15 to -20 ° C.
It prefers a sunny location, but also tolerates partial shade locations. It prefers a rich and deep soil but tolerates poor and dry soils. Adult plants are somewhat drought tolerant.
It prefers a pH between 6.5 and 7.2.
The plant is grown both as an ornamental and for medicinal purposes.
A mature two-year-old Echinacea purpurea plant produces 1 kg of fresh flowered aerial portions and 450 g of fresh root per plant.
It is a plant that is very susceptible to snail attacks.
For propagation it can be done starting from seed; sowing should be done from early to mid-spring in a greenhouse and light cover of the sem.
Fluctuations in daytime temperature help germination. The seed usually germinates in 10 – 21 days at 25 ° C.
Once they have taken root, when young plants are large enough, they must be thinned and then transplanted as soon as the outside temperature is mild, approximately in the period between late spring or early summer of the following year; remember to protect these plants from snails at least until they have stabilized.
Propagation can also occur by division in spring or autumn. Larger clumps can be replanted directly into their permanent locations, although it is better to settle the smaller clumps and grow them in a cold greenhouse until they root well. Transplant must be done in spring.
A last method of propagation can be that from root cuttings, in the early autumn period in the greenhouse.

Customs and Traditions –
Eastern purple coneflower was one of the most important medicinal herbs used by Native North Americans and has become one of the most commonly used herbs in modern herbal medicine. The plant is harvested in the wild to commercialize it but is also often cultivated to meet high demand. The plant is also often cultivated as an ornamental; there are some varieties with various denominations.
Echinacea purpurea is a medicinal herb with important immunostimulating and anti-inflammatory properties, especially for relieving cold symptoms. The plant also attracted scientists’ attention to assess other aspects of its beneficial effects. For example, plant-induced anxiety, antidepression, cytotoxicity, and antimutagenicity have been revealed in various studies.
The results of clinical trials are controversial in terms of side effects. While some studies have revealed the plant’s beneficial effects on patients and no serious adverse effects, others have reported serious side effects including abdominal pain, angioedema, wheezing, nausea, itching, rash, erythema, and hives. Other biological activities of the plant such as antioxidant, antibacterial, antiviral, and larvicidal activity have been reported in previous experimental studies.
Several classes of plant secondary metabolites are believed to be biologically and pharmacologically active, such as alkamides, caffeic acid derivatives, polysaccharides, and glycoproteins.
Despite the controversy of the results, it is believed that caffeic acid derivatives, polysaccharides and glycoproteins are biologically and pharmacologically active. In fact, the simultaneous determination and single analysis of cyclic acid and alchammides has been successfully developed mainly using high performance liquid chromatography (HPLC) coupled with different detectors including UV spectrophotometric mass spectrometry, coulometric electrochemistry and ionization electrospray.
In general, however, Echinacea purpurea was one of the plants most commonly used as a herbal remedy by the North American natives.
Native peoples had adopted a very wide range of applications; the plant was used as an analgesic (also for toothache); anti-inflammatory; as a treatment for cough, cold, and sore throat; as an antidote for various forms of poisoning, including snakebite.
The plant was used by the North American Indians as a universal application to treat, in addition to snake bites, the stings of all kinds of insects,
Today, the plant is one of the most commonly used herbs in modern Western herbal medicine, and its use has also been adopted by Ayurvedic medicine.
It has, however, been shown to have a general stimulating effect on the immune system; it is considered one of the most effective detoxifiers; it has activity against bacterial and viral infections. It is often used for the treatment of circulatory, lymphatic and respiratory systems.
In Germany, more than 200 pharmaceutical preparations are produced from echinacea.
Regarding its intake, there have been some doubts about the body’s ability to absorb the active ingredients orally from a medical point of view (intravenous injections are considered by some to be the only effective way to administer the plant), but recent research demonstrated significant absorption from orally administered applications.
This species is the most easily cultivated of the genus and therefore has been most generally adopted for its medicinal uses.
The root of Echinacea purpurea is adaptogenic, alterative, antiseptic, aphrodisiac, purifying, diaphoretic, digestive, sialagogue and is considered particularly useful in the treatment of sores, wounds, burns, etc.

Preparation method –
Echinacea purpurea is a plant whose leaves can be used, even for edible purposes, though there is little data in this regard.
An infusion of the plant can also be prepared to treat snake bites.
The root is harvested in the fall and can be dried for later use.