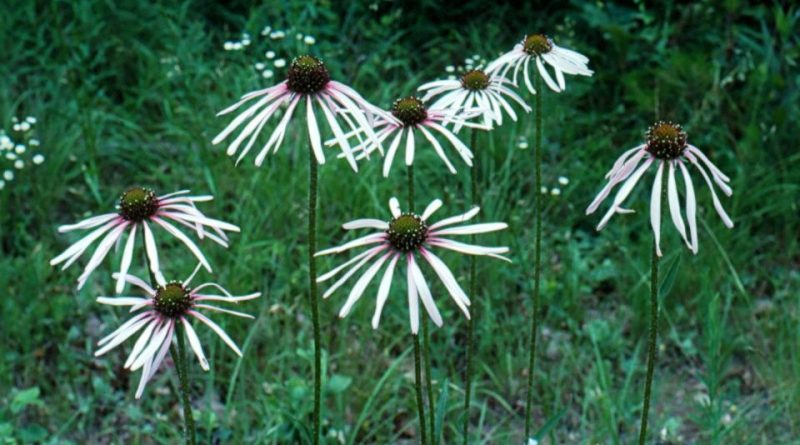 Etymology –
The term Echinacea comes from the Greek ἐχῖνος echînos urchin, porcupine, sea urchin and, by extension, thorny: in reference to the thorny scales of the receptacle.
The specific pale epithet comes from pale, faded, dull, from ballsy, pale, pale, dull: due to the light color of the plant or of the leaves, flowers or other organs.

Geographic Distribution and Habitat –
Pale purple coneflower is a perennial herbaceous plant native to the central region of the United States.
This plant is distributed in the Mississippi Valley, in the southeastern Great Plains and in the region south of Lake Michigan. Most known populations are found in the region from southern Wisconsin and Iowa, as far south as Louisiana and east Texas, with additional reports (many likely from introductions) in the southeastern United States, New England, New York, Michigan and Ontario.
Its habitat is that of arid and limestone lowland grasslands or near sandbanks but, due to the destruction of its habitats, such as in Tennessee and Wisconsin, it is listed among the threatened species, mainly due to habitat loss and the excessive harvesting of roots, which are used in herbal medicine.
Furthermore, this plant is important for the biological cycle of the butterfly Chlosyne nycteis (Doubleday, 1847).
This plant, in certain areas, is grown in gardens and used for medicinal purposes. 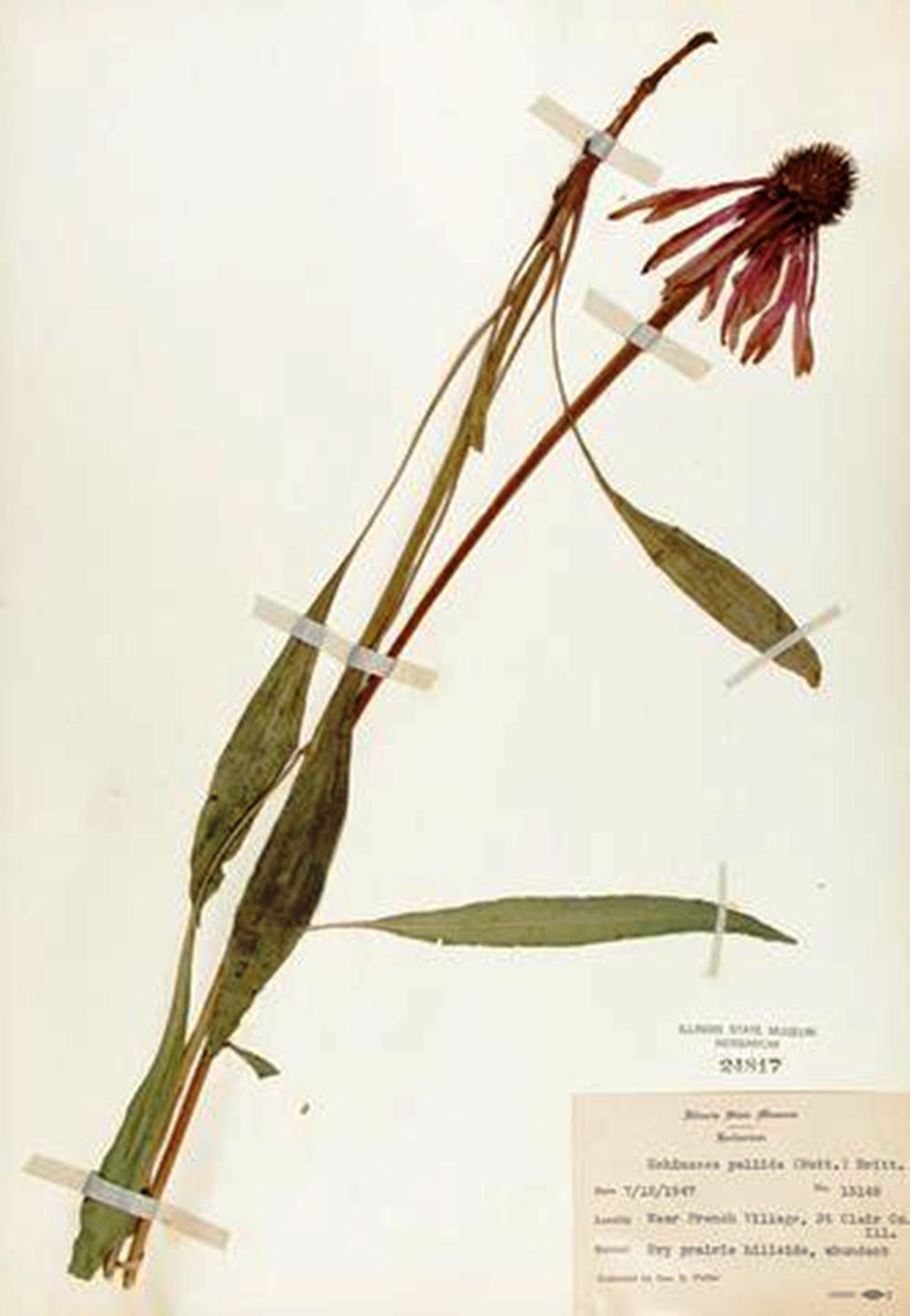 Description –
Pale bending is a species similar to E. angustifolia but often with a taller posture, from 45 to 75, up to 90 and more cm in height.
The thick stem is not ramified in spontaneous plants while producing more stumps clumps in gardens. The stem is green or mottled with purple and green
The plant develops from a deep spindle-shaped taproot, wider in the center and narrowing at the ends.
The leaves have an elongated linear or linear-lanceolate shape with three veins.
The flowers are flower heads, with narrow, linear, elongated and hanging petals, ranging from 2.5 to 7.6 cm in length. The petals have pale pink or almost white color. The flowers have white pollen. Pale Echinacea blooms from May to July.
Fruits are light brown or bicolor cypsele with angled edges.

Cultivation –
Pale purple coneflower is a plant that can be grown easily provided that a well-drained and humus-rich soil is chosen, ideally in full sun with protection from excessive winter humidity.
The plant propagates by sowing the seed when the temperature exceeds 13 ° C in spring. it can also propagate by division in spring or autumn, even if it is affected by the disturbance. Another system is to propagate it by cuttings from the roots in the period from late autumn to early winter.
For care of the plant, remember to cut the stems as the flowers fade, which can encourage further flowering; the flowers can be kept on the plant for winter interest.
This plant, from a phytopathological point of view, is generally free from parasites, but young plants can be susceptible to snails.

Customs and Traditions –
Echinacea pallida, like other plants of the same genus, has been used since ancient times by the Native American population for its healing purposes.
At the end of the nineteenth century, the new Creole inhabitants of North America discovered the importance of Echinacea, which, as mentioned, had long been used by the Red Indians as a medicinal plant. The homeopath Dr. Meyer one day saw an Indian woman crushing an Echinacea plant among the rocks, discovering how cuts and wounds could be healed with her pulp. Around 1870, in the western US, he put on the market the first preparation based on Echinacea giving it the name of “Meyer’s Blood Purifier.” Initially he didn’t even know the name of the medical plant so useful in the treatment of numerous ailments. later identified by the Lloyd brothers, at the time considered the largest natural remedy providers in North America. In the late 19th and early 20th centuries, there was such a boom in Echinacea sales that it became by far the most sold in the USA.
In Europe, it is grown mainly as an ornamental plant and can grow to a height of one meter.
From an ecological point of view, when the plant is in full bloom it emits a light fragrance, similar to that of honey, which attracts bees, butterflies, and other insects. As soon as the flower has been pollinated by pollinators, the scent tends to resemble vanilla more.
Pale Echinacea, like others of its kind, intensifies skin defense mechanisms by promoting the healing of wounds and infections; it improves the condition of impure skin that tends to become inflamed and pustular, reducing the bacterial load to physiological levels. Unbalanced and altered metabolism is brought back to an orderly activity and the intact protective state of the skin is restored.
This plant, in the cold season, plays an essential role in the prevention and treatment of colds and flu. The non-specific stimulation of the immune system supports and strengthens the natural defenses, allowing the body to react against different types of pathogens such as bacteria, viruses, and protozoa.
Pale Echinacea is often used internally as a supportive therapy in recurrent diseases of the airways and lower urinary tract. What we know about the medicinal uses of Echinacea are largely due to the Indians of North America. It was one of the most important medicinal plants, traditionally used to treat feverish states, insect bites, wounds to be healed, and even snake bites. Originally it was used in particular for the treatment of open wounds, as it was effective in all cases of inflammation and infection. The suitability of this plant for the treatment of wounds and the treatment of skin diseases stems from its anti-inflammatory and antiseptic action that reduces swelling.
Echinacea pallida contains Echinacoside, essential oils, echinacein, bitter substances, flavonoids, polysaccharides.

Preparation Method –
Echinacea has virtually no use as an infusion, as most of its components are lost with drying.
For medical applications derived from this plant, both the entire plant and especially the hydroalcoholic root extract are used.
The root It is harvested in the fall and dried for later use.