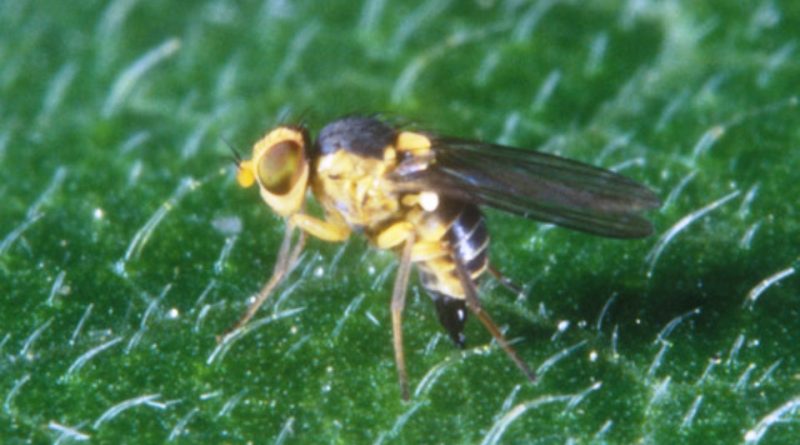 The American serpentine leafminer (Liriomyza trifolii Burgess, 1880) is a small dipteran belonging to the Agromyzidae family.

Systematics –
From a systematic point of view it belongs to:
Eukaryota Domain,
Kingdom Animalia,
Sub-kingdom Eumetazoa,
Bilateria branch,
Phylum Arthropoda,
Subphylum Tracheata,
Superclass Hexapoda,
Insecta class,
Subclass Pterygota,
Endopterygota cohort,
Superorder Oligoneoptera,
Section Panorpoidea,
Order Diptera,
Suborder Brachycera,
Cyclorrhapha cohort,
Section Schizophora,
Subsection Acalyptratae,
Family Agromyzidae,
Genus Liriomyza,
Species L. trifolii.
The terms are synonymous:
– Agromyza phaseolunata Frost, 1943;
– Liriomyza alliovora Frick, 1955;
– Oscinis trifolii Burgess, 1880.
Geographic Distribution and Habitat –
Liriomyza trifolii is a dipteran whose origins are in the Caribbean countries and in the southeastern United States (concentrated in particular in southern Florida).
However, the export of plant products from these areas has led to the spread of the insect in several Asian countries along the Pacific Ocean, as well as in Europe, California and some parts of Canada.
The spread of the insect was also generated by its progressive resistance to certain insecticides.
The insect is remarkably polyphagous and reported on 122 different plant species; affects ornamental plants, various vegetable plants including onion, leek, celery, chard, pepper, watermelon, melon, lettuce, Phaseolus spp., pea, potato, spinach, Vigna sp., as well as cotton, alfalfa and numerous other cultivated and wild as well as greenhouse plants.
Its original habitat was that of tropical and subtropical climates but, with the spread and resistance to insecticides, it now frequently infests greenhouses and can be found in a wider variety of climates such as temperate ones, while it is less present in cold ones.

Morphology –
The American serpentine leafminer is a small dipteran in which adult individuals are small in size, 1.3 to 2.3 mm in length. The head is yellow, the thorax and abdomen are grayish black, the legs, and the scutellum are bright yellow.
The wingspan ranges from 1.25 to 1.90 mm. The wings are transparent and with clear veins.
The male is smaller than the female.
The egg measures 0.2 x 0.1 mm; it is cream-colored, initially translucent. This is placed slightly under the leaf epidermis.
The larva, at birth, is colorless and is 0.5 mm long. When fully developed it reaches 3 mm in length and becomes bright yellow in color. This, inside the mesophyll, digs tunnels that manifest, on the outside, with characteristic designs; often in the central part of the mine, lighter than the leaf green, a blackish line of excrements left by the larval stages during their trophic movement is noted.

Attitude and Life Cycle –
The biological cycle of Liriomyza trifolii is very variable depending on whether it occurs on plants in protected cultivation or in open fields.
In the case of crops, the generations of generations are practically continuous.
Even in the field, the number of generations is not standardizable but varies greatly depending on climatic conditions.
The adults live on average 15-30 days, with the females having a longer longevity than that of the males, and feed on the nectar of the flowers and the sap that comes out of the lesions produced on the leaves by the females through the ovipositor. These wounds, surrounded by tissues that lighten and eventually necrotize, are larger than those resulting from egg laying.
Development stops with temperatures below 7.5 or 12.9 ° C, depending on the stage and host plant; the optimum temperature is close to 25 ° C; above 30 ° C, the mortality of the larvae grows.
The moment of mating takes place only 24 hours after the flickering of the adults.
The eggs are laid within the tissues of the leaf parenchyma or the petiole in a variable number according to the temperature and the host plant: ranging from 25 ° on celery at 15 ° C to over 600 in chrysanthemum at 30 ° C.
The incubation period for eggs varies from 2 to 5 days, depending on the temperature. The development of the larvae lasts 4-7 days in the presence of average temperatures above 24 ° C, while a considerable mortality occurs above 30 ° C.
Once they have reached maturity, the larvae generally pupate outside the mines, on the leaves or on the surface of the soil. In rare circumstances pupae can also form inside mines, but adults do not always manage to get outside and, after trying in vain to find a way out, they run out and die. Onion and medical plants pupation occurs inside the last section of the mine. Adults usually appear after 1-2 weeks, with temperatures between 20-30 ° C.
The damage is caused by the formation of mines, which if present in considerable numbers end up affecting a large part of the leaf flap and of the small ones with consequent reduction of photosynthetic activity, leaf drying and sometimes death of young plants.
As a result, the crops undergo a significant commercial depreciation and cannot be exported. The perforations made with the ovipositor by the females cause lesions, desiccation and favor the establishment of fungal infections. In addition to direct damage, the dipterus is capable of transmitting the celery mosaic virus.

Ecological Role –
Both larval and adult females of Liriomyza trifolii feed mainly on the leaves of their host plants. The larvae feed mainly on the layer of the leaf just below the epidermis, while the adult females feed on the liquids expelled by the leaves after the adult has pierced them.
This small dwarf feeds a large variety of host plants, including both vegetables and ornamental plants.
This dipteran can be held within acceptable limits of population by some parasites and predators.
The most significant natural threat is parasitic vespe. These wasps lay their eggs among those of Liriomyza trifolii. When wasps hatch, they typically devour nearby flies’ eggs, as is typical for parasites.
The most common parasitoids are wasps of the Braconidae, Eulophidae and Pteromalidae families. In the absence of insecticides these parasitoids play an important role in controlling the Liriomyza trifolii population.
Although predators and diseases tend to impact the Liriomyza trifolii population to a lesser extent than parasitoids, both larvae and adults of L. trifolii can be preyed upon by other organisms including ants.
The presence and harm threshold of this dipteran is assessed using a variety of sampling methods, including mine count, live larvae count, pupae collection, and adult capture.
In the interventions of containment of this insect it should be taken into account that the spread of Liriomyza trifolii is largely due to the resistance developed to certain insecticides; insecticides also kill parasitoids that populate the area. Therefore, the use of insecticides not only harms the ecosystem but also reduces the population of the main biological control form for L. trifolii.
The chemical fight is therefore to be considered inappropriate if not counterproductive in the medium – long term.
In the greenhouse encouraging results were also obtained with yellow chromotropic traps. Finally, good results were obtained using, with biological control techniques, the Hymenoptera Eulofide Diglyphus isaea, ectophagus parasitoid of the larvae.
This parasitoid is bred in some European biofactories and launched to the adult stage. The female of the parasitoid immobilizes the host’s larva, inside the mines, then ovips near her egg; the newborn larvae will feed on the host larva; moreover, the female entomophagus can exert a direct predatory action on the younger larvae of Liriomyza trifolii.