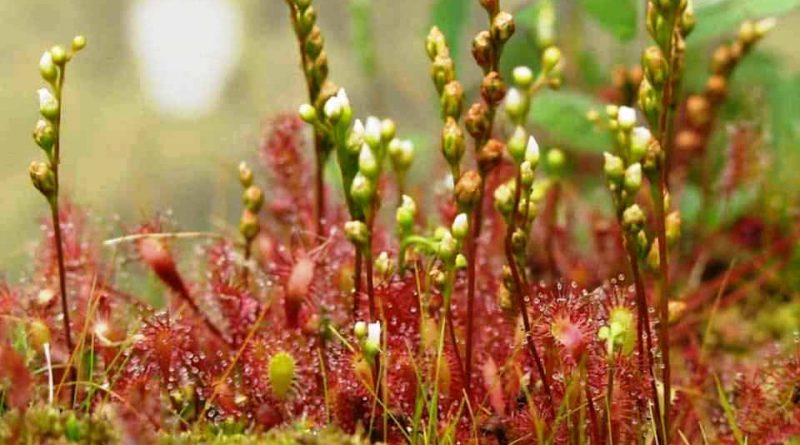 Etymology –
The term Drosera comes from the Greek δροσερός droserós dewy, which has droplets.
The specific intermediate epithet comes from intermediate, halfway between two extremes, referring to color, size, shape or other characteristics.

Geographic Distribution and Habitat –
Drosera intermedia is a plant widespread in a vast range that includes: Europe, North America, Cuba and South America.
The Cuban and South American types are tropical and do not form hibernacula in winter.
Its habitat is that of sphagnum peat bogs, in substrates with a pH below 5, and of the edges of swamps and marshes with acidic waters, from about 100 to 1000 m.
In Italy it is one of the few insectivorous plants of the peninsular flora: it lives on very acidic and nutrient-poor substrates, which it obtains by digesting the small insects that remain entangled on the leaf glands. 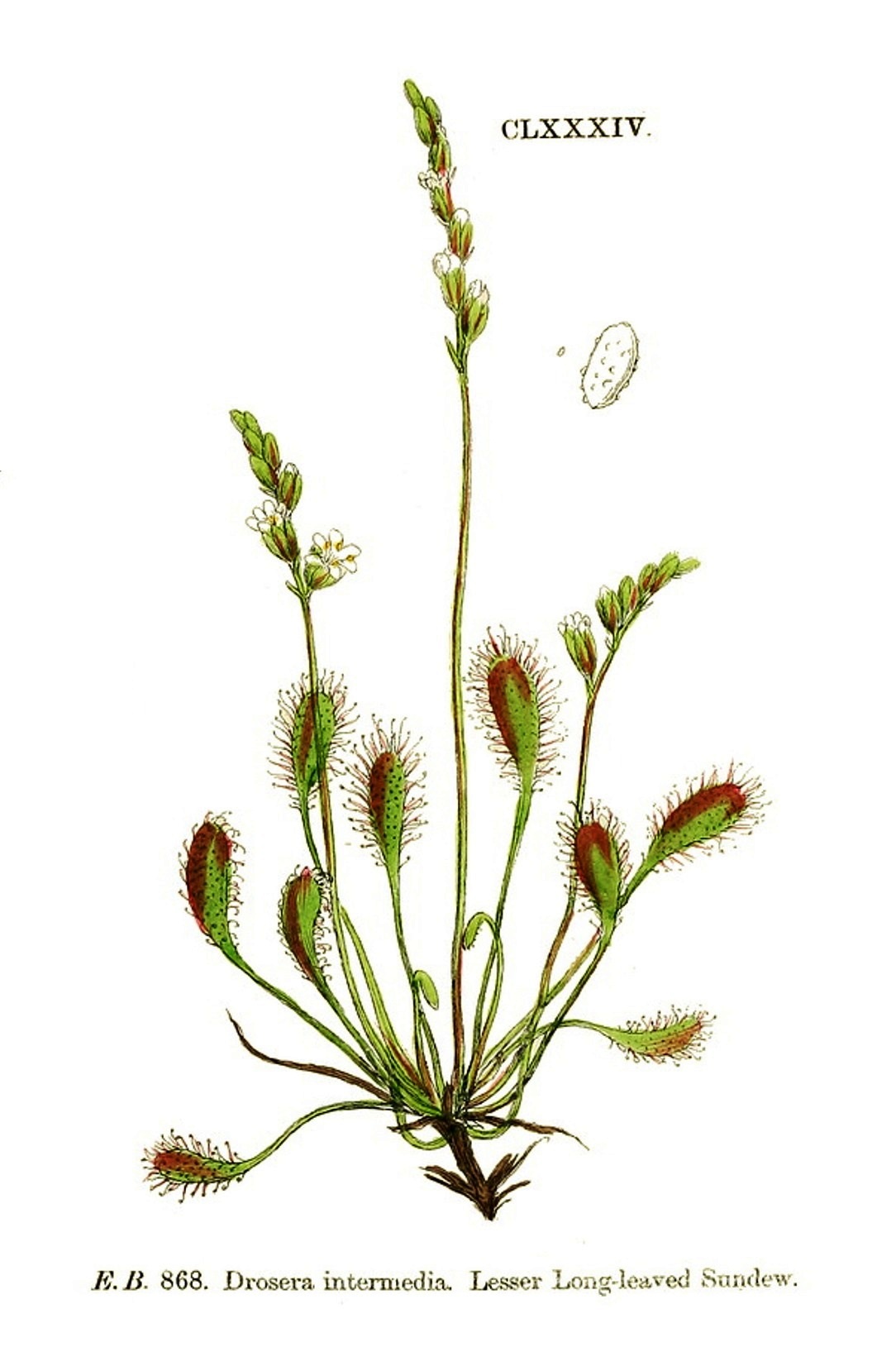 Description –
Drosera intermedia is a perennial, carnivorous herbaceous plant, about 10 cm tall.
The leaves are spatulated and arranged in a semi-erect rosette. Leaf blades are thickly covered with stemmed mucilaginous glands that secrete a sugary nectar to attract insects which then become trapped by the mucilage and, unless strong enough to escape, are suffocated by a sticky substance or die from exhaustion.
The plant then secretes digestive enzymes from the sessile glands and then absorbs the resulting nutrient solution to supplement the poor mineral nutrition that the plant’s characteristic environment offers.
The plant blooms from June to August inclusive, forming inflorescences up to 15 cm high, which give from 3 to 8 white flowers. Fertilized ovaries swell to form dehiscent egg-shaped capsules, which contain and then generate numerous tiny seeds.
In temperate zones, in the winter period, it goes into vegetative stasis (dormancy), during which it forms a winter bud called hibernacula.

Cultivation –
Drosera intermedia prefers to live in nutrient-poor soils and in very sunny environments.
In fact, its peculiarity is that of vegetating in very humid and marshy soils, sometimes we even find it semi-submerged by stagnant waters.
Although it is a rather rare carnivore, its cultivation is extremely simple due to the characteristic of a very robust plant.
In fact, during the winter it can even withstand temperatures that reach -20 °, in these cases the only care is to repair it under a cloth.
Drosera intermedia loves a lot of light but cannot bear direct sunlight, especially in the hottest hours of the summer season.
As for watering, the saucer must always be used filled with water during the vegetative period.
The humidity must be between 60% and 80%.
For repotting use a mixture of peat and perlite in equal quantities.

Customs and Traditions –
The historical use of sundew is similar to its use in modern herbal medicine. In 1685, Johann Schroder wrote in his book The Apothecary or a Treasure Chest of Valuable Medicines, that sundew was a beneficial herb that “cures lung ailments and coughs”. Sundew tea has been specifically recommended in Europe by herbalists for dry cough, bronchitis, whooping cough, asthma and “bronchial cramps”.
People take sundew for various respiratory problems including bronchitis, asthma, whooping cough, cancer, and many other conditions, but, to date, there isn’t enough specific evidence to support these uses.
Sundew contains chemicals that have anti-inflammatory effects. It could also reduce spasms.

Preparation Method –
The whole plant is used of this species and tea can be prepared for the indicated healing purposes.