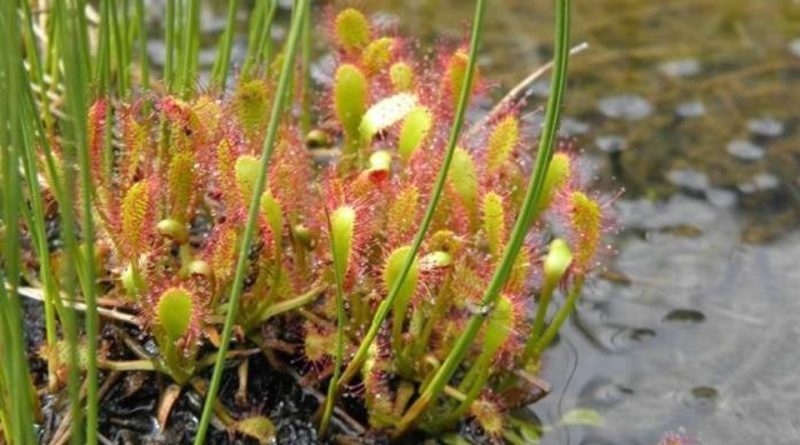 The English sundew or great sundew (Drosera anglica Huds.) Is a carnivorous herbaceous species belonging to the Droseraceae family.

Etymology –
The term Drosera comes from the Greek δροσερός droserós dewy, which has droplets.
The specific Anglian epithet derives from Anglii, a West Germanic population that occupied Britain which then took the name of Anglia: of Anglia, English, or more generally British.

Geographic Distribution and Habitat –
The English sundew is a plant, with a vast circumboreal distribution, very widespread in the cold and temperate-cold areas of Europe, Asia and North America.
In Italy it is very rare and is found along almost the entire Alpine arc and is one of the few insectivorous plants in the peninsula where it lives on very acidic and nutrient-poor substrates, which it obtains by digesting the small insects that remain entangled on the leaf glands.
Its habitat is that of sphagnum peat bogs and the edges of swamps and marshes with acidic waters, from sea level to the alpine belt. 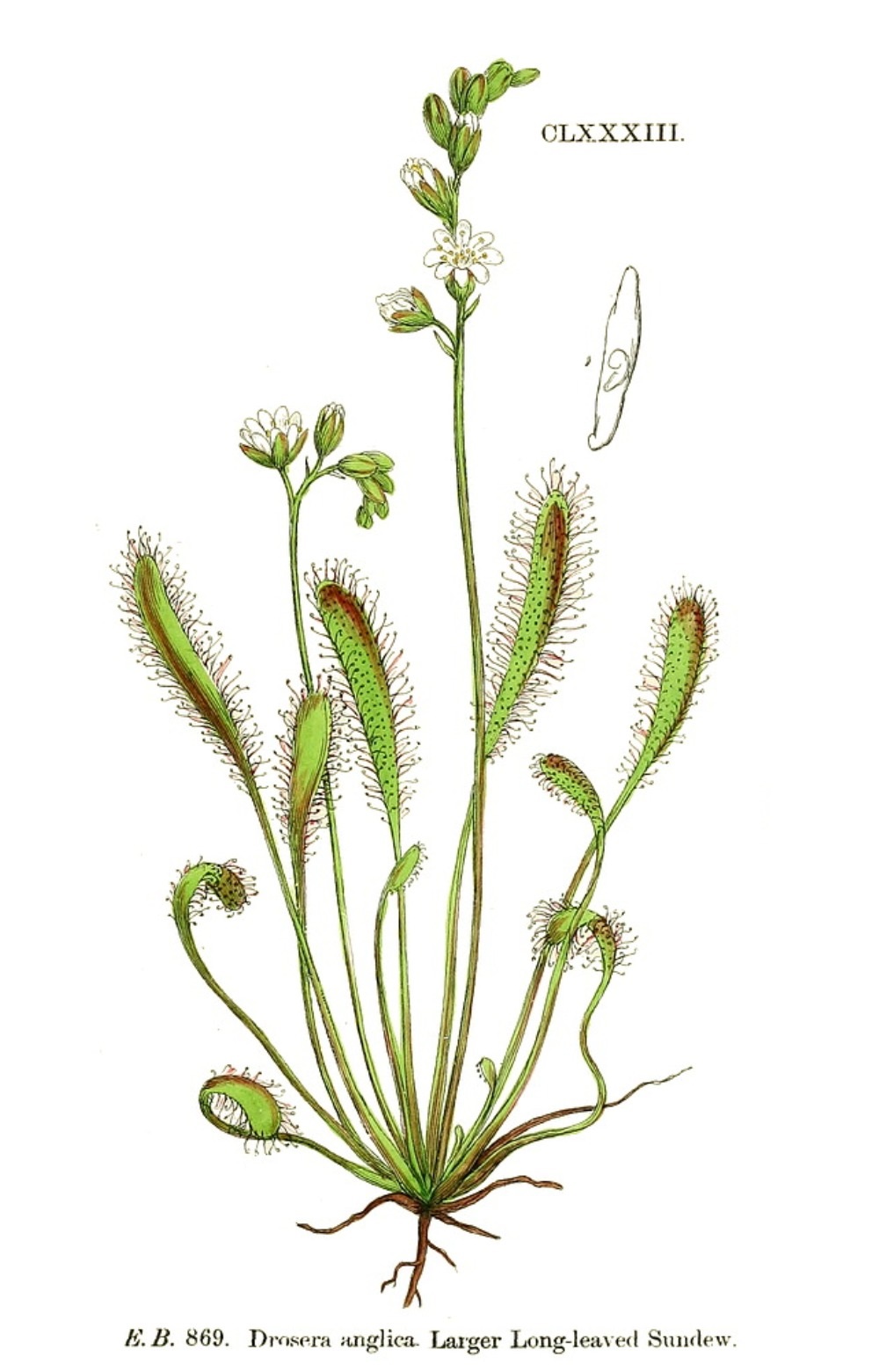 Description –
Drosera anglica is a perennial herb that forms an erect rosette without a stem and generally linear spatulate leaves. The leaf blades are densely covered with pedunculated reddish mucilaginous glands, each covered with a clear drop of a viscous fluid used to trap insects. The lamina, which is 15–35 millimeters long, is held semi-erect by a long petiole, bringing the total leaf size to 30–95 mm.
The plants are green and turn red in bright light.
Normally this plant forms winter resting buds called ibernacula. These consist of a knot of tightly curled leaves at ground level, which open in spring at the end of the dormancy period.
The root system is weak and penetrates only a few centimeters, acting mainly as an anchor and for water absorption. As nitrogen is scarce in swamps, the system of trapping and digesting insects provides an alternative source.
Drosera anglica blooms in summer, producing 6–18 centimeter long peduncles, bearing several white flowers that open individually.
The flowers have five sepals, petals and stamens with three styles. The petals of this species are 8-12mm long and the flowers have branched 2-lobed styles. The flowers are odorless and devoid of nectar they do not rely on pollinators for pollination, but rather through self-pollination (self-pollination).
The fruits are a dehiscent three-valve capsule.
The seeds are round and fusiform, black in color, with a length of about 1 mm.

Cultivation –
Drosera anglica is an open, non-wooded habitat plant including swamps, marshes and other soils rich in moist calcium where it is often associated with various sphagnum mosses. The plant can grow in areas with low pH or on substrates with live or decaying sphagnum. Being a carnivorous plant it can grow well in low-nutrient habitats getting its nourishment from insects.

Customs and Traditions –
Drosera anglica was first described by William Hudson in 1778. It has often been confused with D. intermedia. This confusion was fueled by the re-emergence of an older name, D. longifolia (described by Carl Linnaeus in 1753), which was considered too ambiguous in the description and had been applied to specimens of both D. anglica and D. intermedia.
Drosera anglica traps and digests small arthropods, usually insects, through its mucilaginous glands. These are attracted to a sugary scent oozing from the glands and, when they land on the plant, they adhere to the sticky drops of the mucilage. Although most of its prey is made up of small insects such as flies, larger insects are also caught; thus small butterflies and even dragonflies can be immobilized by the sticky mucilage of the plant.
In addition to the ability to capture prey, this plant is also able to move further, being able to fold the leaf blades around the prey to aid the digestion process. Movement of the tentacle can occur in minutes, while the leaf takes hours or days to bend. When something is caught, the tentacles touching the prey give off additional mucilage to bog down the prey, which eventually dies from exhaustion or is asphyxiated when mucilage clogs its tracheas. Once the prey has been digested and the resulting nutrient solution has been absorbed by the plant, the leaf unfolds, leaving only the prey’s exoskeleton behind.
This plant is used in herbal medicine.
The historical use of sundew is similar to its use in modern herbal medicine. In 1685, Johann Schroder wrote in his book The Apothecary or a Treasure Chest of Valuable Medicines, that sundew was a beneficial herb that “cures lung ailments and coughs”. Sundew tea has been specifically recommended in Europe by herbalists for dry cough, bronchitis, whooping cough, asthma and bronchial cramps.
Despite this plant being used, there has long been insufficient scientific evidence to support these uses.
However, the plant contains chemicals that have anti-inflammatory effects and could therefore reduce spasms as well.

Preparation Method –
With the leaves of this plant a tea is prepared that is used to soothe lung problems.