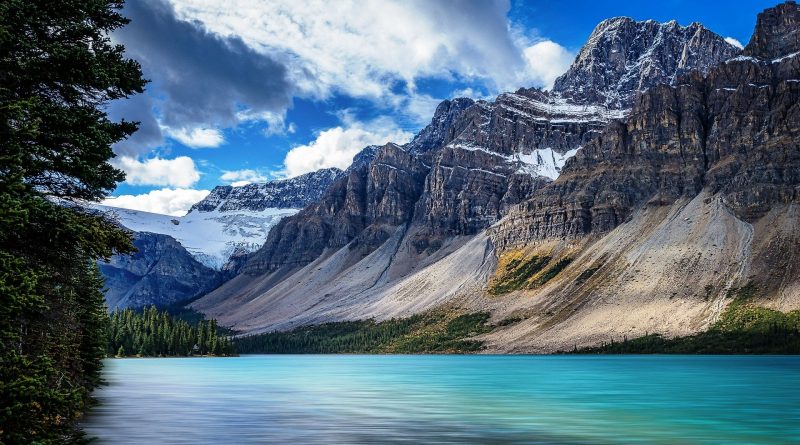 Rocky Mountain National Park, whose WDPA code is 984 is a United States park established on January 26, 1915.
This park, located in the north-central region of Colorado, north-west of the city of Boulder has an extension of 1,075.53 km².
Rocky Mountain National Park features majestic mountains, abundant wildlife, lakes and streams (including the Colorado headwaters), climates and environments as diverse as woodlands, montane forests and tundra.
The highest point of this park is Longs Peak, 4,346m a.s.l.
The Rocky Mountain National Park is divided by the Continental Divide, the watershed that separates North America between the basin of rivers that end up in the Atlantic Ocean and those that end up in the Pacific Ocean, which gives the two parts of the park different characteristics. the eastern side tends to be drier and with many icy peaks, while the western side is more humid and lush, dominated by dense forests.
Due to the presence of its steep slopes, this park is an important climbing site, where you can practice crag climbing, bouldering and long routes. The rock is made of granite gneiss.
In addition to its geographical and geological characteristics, this park is of great importance from an ecological point of view.
In fact, the Rocky Mountain National Park is home to around 900 plant species, 281 types of birds and 60 species of mammals. Some are easy to spot while others remain elusive. The incredible diversity of plant and animal life in the park reflects three distinct life systems that correspond to altitude: mountain, subalpine and alpine. In addition, the riparian communities, which cross all these areas, support flora and fauna along rivers and streams.

Flora –
On the dry, sunny slopes and open south facing valleys at the lower east levels of the Continental Divide (approximately 2,100 to 2,900 meters above sea level) you can find Easter daisy (Townsendia exscapa) and ponderosa pine (Pinus ponderosa), which stands out for its “bark puzzle”. The wetter, north-facing slopes support Douglas fir (Pseudotsuga menziesii) and lodge pine (Pinus contorta) and a smaller population of ponderosa. The pasqueflower (Anem-one patens) blooms here in May at the same time as the western wall flower (Erysi-mum asperum). The fairy slipper (Calypso bulbosa), a member of the orchid family, blooms shortly after.
The Engelmann fir (Picea engelmannii) and the subalpine fir (Abies lasiocarpa) take over at this subalpine altitude (from 2,900 to 3,500 meters approximately). Where fires have cleared the ground, pine and cranberry (Vaccinium) flourish. In wind-blown areas, the agile pine (Pinus flexilis) is folded and twisted into bizarre shapes. Strong, cold winds can destroy new growth on the windward side of trees, leaving permanent growth only on the protected side. Such trees are often called “flag” trees. Approaching the treeline (above which trees do not grow), new seedlings often germinate only on the sheltered sides of the rocks where they can be protected from the wind. Growing only up to the rocks that provide them with protection, these stunted krummholz trees can be several hundred years old.
The Alpine area, located above the tree line (3,500 meters of elevation and beyond), is an extreme land. To survive here, you need to be able to withstand hurricane winds, arctic temperatures, and a radically shortened growing season. To adapt, alpine plants such as the Alpine deer (Acomastylis rossii) form moss-like clumps that hug the ground with long taproots. Many tundra plants have dense hairs on stems and leaves that provide wind protection or red pigments that convert sunlight into heat and shield from ultraviolet radiation. 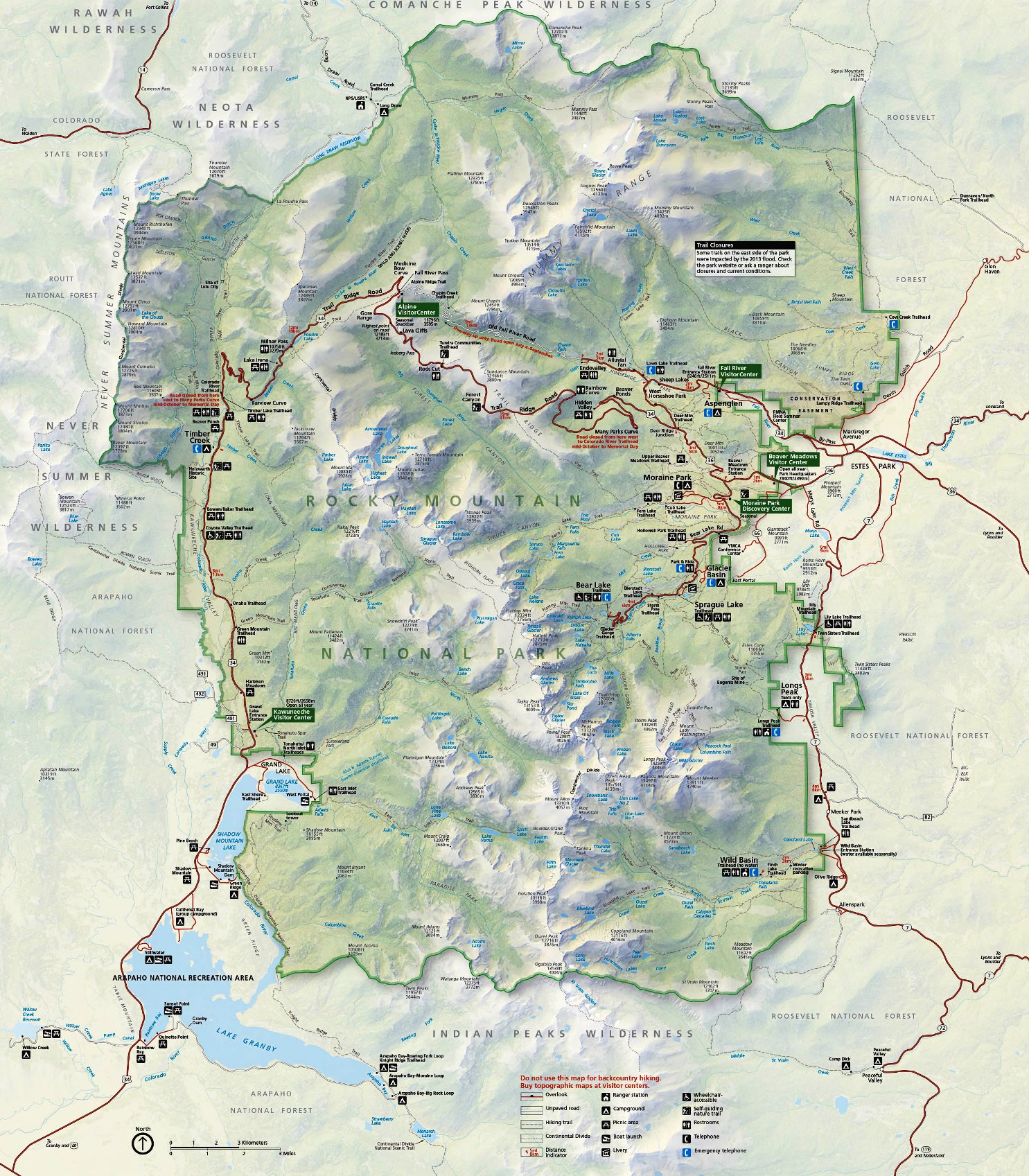 Fauna –
Three thousand moose (Cervus elaphus) reside in the Rocky Mountain National Park. Before the park was established, hunting had decimated the population, but careful management has since restored the herds, most of which live in the high mountains during the summer. In the fall, elk migrate to lower elevations where they are often seen in open meadows or at the edge of the forest. During the mating season, the bull elk emits a combination of high-pitched whistles and grunts in an attempt to lure a female.
Due to the popularity of moose watching, rules exist to ensure that the animals are not disturbed at this critical time. Male moose are very unpredictable and dangerous.
The largest member of the deer family, the elk (Alces alces) is, by its nature, solitary. Occasionally they can be seen among the willows in the Kawuneeche Valley. Males are equipped with huge antlers that are shaped like clawed scoops, clearly distinguishing them from females who do not have any. Moose are strong swimmers and are capable of diving in search of food, staying underwater for several minutes at a time. Their long legs are an adaptation for living in a deep snow covered habitat for much of the year.
The mule deer (Odocoileus hemionus) is smaller than the moose and frequents the edges of the meadows near the park roads. As delicate and gentle as they may seem, mule deer are highly territorial and can cause severe injuries with their sharp hooves and antlers, so never approach them.
The beaver (Castor canadensis) is mainly nocturnal, but evidence of their presence is visible along the park’s streams and ponds where they cut poplars and willows for food and to build dams. The resulting logs appear to have been cut at an acute angle with two or three cuts of a hatchet. Without the beaver and its building skills, the evergreen species would have taken over the lawns, rendering them useless as a habitat for deer, moose and many other park animals. By barring the waterways, the beaver creates ponds which eventually fill with silt and become meadows. The beaver then selects a new area for its dam and the habitat construction process continues.
Abundant and active, the yellow-bellied marmot (Mar-mota flaviventris), the golden-mantled ground squirrel (Spermophilus lateralis), the Wyoming ground squirrel (Spermophilus eligam), the Colorado squirrel (Tamias quadrivittatus) and the chick (Tamiasciurus hudsonicus) are rodents commonly seen in campsites, along trails, in picnic areas, and in gazes.
Black bears (Ursus americanus), which actually vary in color from blond to black, exist in the park in small numbers (30-50).
Grizzlies once populated the area, but were hunted here until extinction in the 1920s. Black bears, the grizzly’s smaller cousins, can occasionally be seen along roads or at campgrounds.
It is always advised not to go near a bear, especially one with cubs.
The coyote (Canis latrans) is the park’s most important predator for maintaining the balance of nature. His kind, the wolf, once thrived here, but has been trapped and hunted to extinction.
The mountain lion (Felis concolor), which feeds mainly on deer, and the bobcat (Lynx rufus), which feeds on a variety of rodents and birds, are shy, reserved, and rarely seen. Additionally, feral cats can be extremely dangerous and are known to attack humans.
In the height of summer, large numbers of the reddish hummingbird (Selasphorus rufus) can be seen migrating through the park.
Here the blue mountain bird (Sialia currucoides) often nests in the abandoned holes of the woodpecker’s nest. Once abundant in the West, its numbers have declined as its primary habitat and suitable nesting sites have been occupied by human activities.
Many civic groups are trying to revitalize the local population of this colorful bird by storing in birdhouses on fence posts and other suitable places.
Ospreys and other raptors are also commonly seen at lower elevations near Grand Lake in this park.
The peregrine falcon (Falco peregrinus), which was nearly driven to extinction due to DDT, has made a huge recovery since the toxic chemical was banned. Chicks born in captivity have been released into the park for several years and there are now breeding or breeding pairs. The fastest of all birds, the peregrine falcon, can swoop down vertically over 300 km / hour to capture its prey.