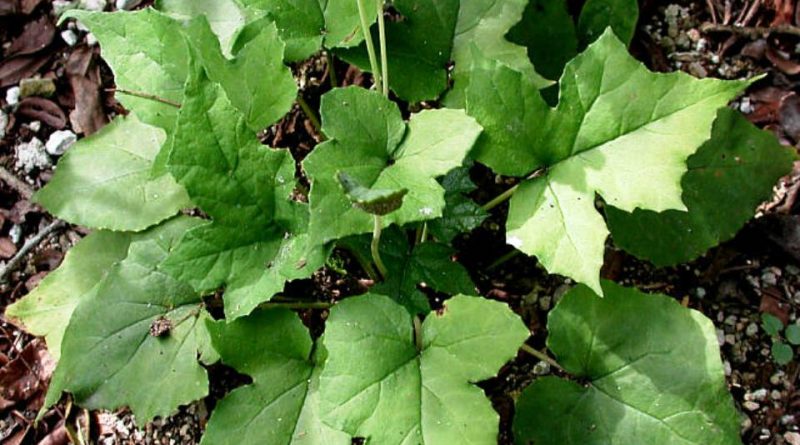 Etymology –
The term Dorstenia of the genus is in honor of the German physician and botanist Theodor Dorsten (1492-1552) professor in Marburg, author of the Botanicon continens herbarum aliorumque simplicium.
The specific epithet Contrajerva comes from the Spanish contrayerba (literally, a counter herb, therefore an antidote for poison) and in turn, from the Latin contra + herba.

Geographic Distribution and Habitat –
Dorstenia contrajerva is a plant native to an area that includes southern Mexico, Central America, the Caribbean and northern South America, including Peru; moreover the plant is cultivated in Indonesia (Java) and Malaysia (Malacca), and locally in Africa and South America.
This plant has also been introduced in North America (Florida) and has become a weed in greenhouses and nurseries.
Its habitat is that of shady places in the disturbed vegetation of mangroves, savannas, thickets and tropical forests. 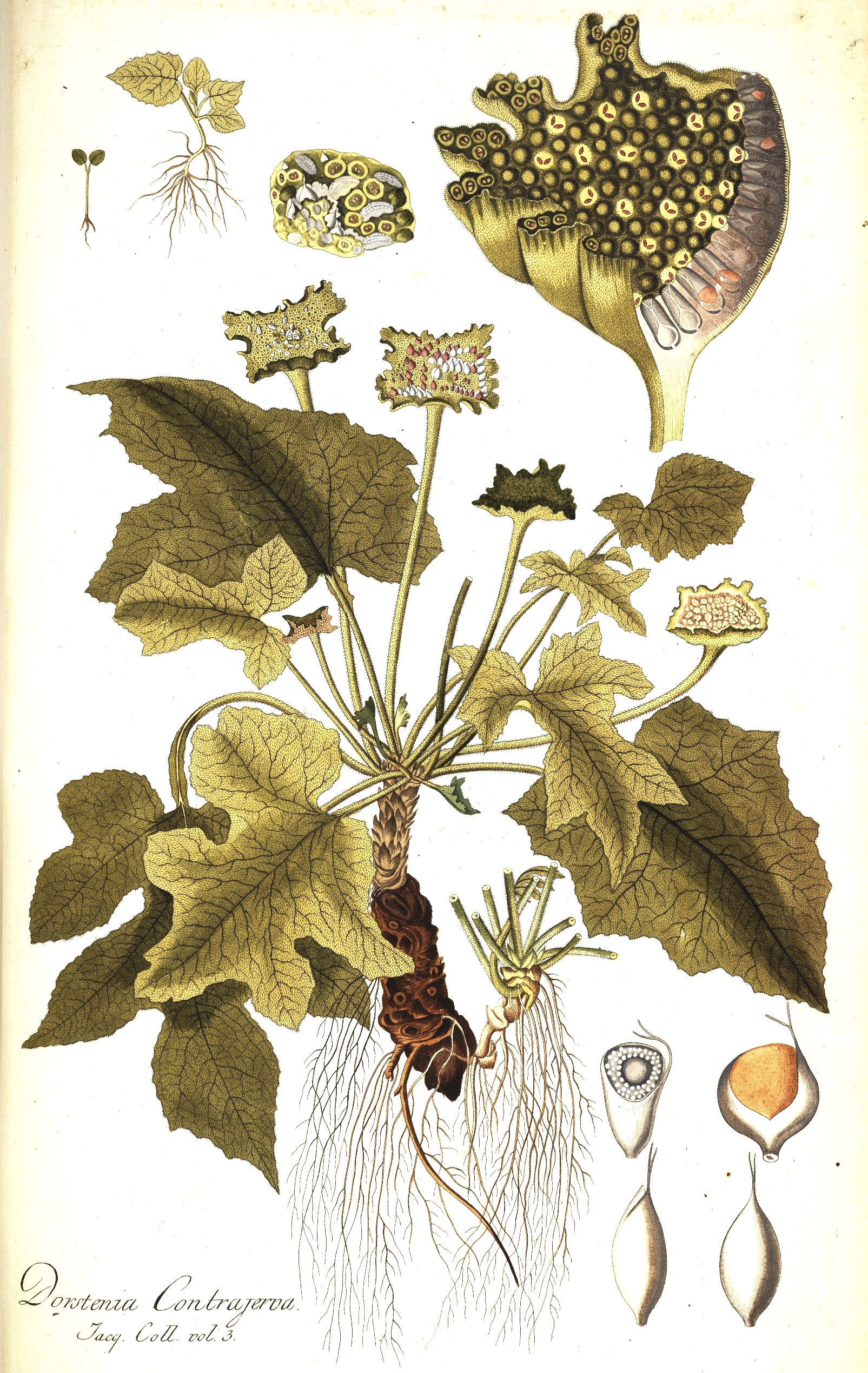 Description –
Dorstenia contrajerva is a small herbaceous and perennial plant, evergreen, with a creeping rhizome from which a rosette of leaves with long petioles emerges.
The rhizome is like fusiform, with 1-2 heads, 5-7.5 cm long, 12 mm thick, reddish in color, with an unpleasant and acrid odor and bitter taste.
The stems, if any, are very short and covered at the base with persistent petioles.
The leaves vary in shape, as plants with lobed and non-lobed leaves coexist in the same populations. The leaves are up to 20 cm long on the petioles up to 25 cm long.
If damaged, this plant emits a white latex.
The male and female flowers are small and distributed mixed in a convoluted discoid receptacle.
The fruits are small drupes inside a quadrangular container.
The tiny seeds are yellowish and spread around the plant explosively.

Cultivation –
Dorstenia contrajerva is a plant that is sometimes grown as a houseplant and that requires, however, an area in full shade and rich soil that should be kept moist but not saturated.
If grown indoors, it should be fertilized weekly using a balanced fertilizer diluted in half.
The seeds are very viable and germinate on any soil. Repotting can be done at any time of the year. Easily propagated by seed or by division. The fresh seed will germinate in 7-14 days at a temperature of 16 – 21 ° C.
In addition to seed, propagation can take place through cuttings.

Customs and Traditions –
Dorstenia contrajerva is a plant well known in Central America for its use in popular medicine.
The name contrahierba, used by Linnaeus to designate this species, is normally used in Spanish to designate plants of presumed exceptional value as against agents of poisons.
In the folk medicine of Honduras, the boiled root is used to treat diarrhea, dysentery and stomach pain. The lightly roasted and ground root is used to treat intestinal worms and parasites. The crushed root is mixed with water to treat snake bites.
In Nicaragua, the boiled root is used to prevent diarrhea; chopped raw rhizomes are used to treat diarrhea, sickness, stomach upset, indigestion and worms.
In El Salvador, this plant is used for stomach pain and to prevent vomiting.
In Costa Rica, the boiled root is used to treat diarrhea and an infusion to lower fever. It is considered useful in the treatment of persistent diarrhea and as an emmenagogue.
In Mexico, latex is used to heal wounds and inflorescences are given to teething babies.
In the Amazon region of Peru it is used as a tonic, against gangrene and as an antidote for bee and wasp stings.
In Argentina, the whole plant is used to treat snake bites.
In Venezuela it is used as a sudorific and as a cure for dysentery.
According to the Duke’s Handbook of Medicinal Plants of Latin America, the medicinal activities of this plant are: alexiteric, anti-HIV, diaphoretic, diuretic, emmenaggoga, febrifuge, leimanicide, orexigenic, stimulant, tonic.
The United States Pharmacopoeia and the National Formulary of 1927 states that the root of this plant was used for low fevers, typhus, diarrhea, dysentery, snake bites; in decoction, tincture.
The first description of this plant and its medical use in Mexico is said to have been made by the Spanish naturalist and physician Francisco Hernández de Toledo in the 16th century.
The 18th-19th century Mexican Spanish physician and botanist Vicente Cervantes describes it as: “a plant with an aromatic odor, acrid taste, a bit bitter and persistent. Its virtue is stimulating, invigorating and diaphoretic, it is recommended in fevers. putrid or dynamic “.
As for the chemical constituents, according to the United States Pharmacopoeia and the National Formulary (1927) it states that the root of Dorstenia contrajerva contains contrayerbine (contrajervin, which is a peptide), cajapine, volatile oil, resin, a bitter and starch principle .
A 2016 study isolated the following 11 compounds from this plant:
– dorsjervin A, dorsjervin B, psoralen, dorstenin, squalene, y-sitosterol, cycloartocarpesine, 1-O-linolenoyl-2-O-stearoyl-3-O-ß -D-galactopyranosyl glycerol, bergapten, dorsthenol and xantharnol. Furthermore, siriogenin cardenolide was isolated from the root.
In general, therefore, the root contains an antidote to snake venom and is also used as a febrifuge; moreover, the plant is a common home remedy for dysentery and is also used in the treatment of poisonous animal bites of all kinds.
Among other uses we remember that Dorstenia contrajerva can be used, in agroforestry uses, as a ground cover in shaded positions.
Also in North and Central America, a stem and leaf powder is mixed with tobacco to improve the taste of cigarettes.

Preparation Method –
Snakewort is a plant whose boiled root is used to prevent diarrhea; chopped raw rhizomes are used to treat diarrhea, sickness, stomach upset, indigestion and worms.
Latex is also used to heal wounds and inflorescences are given to teething babies.
The whole plant is also used to treat snake bites or bites from other poisonous animals.