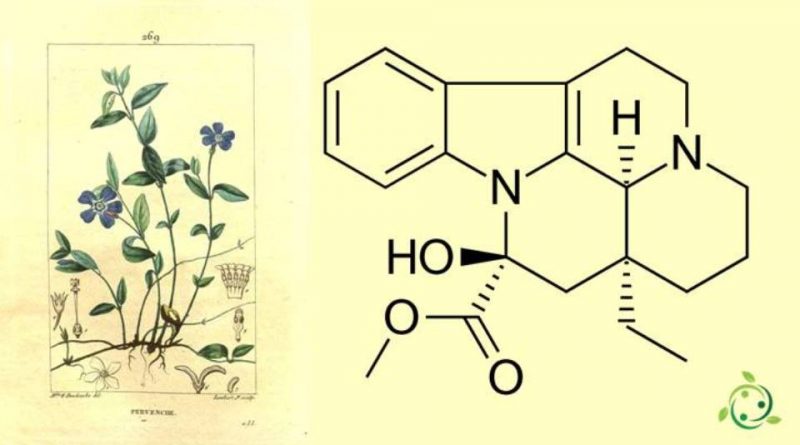 Vincamine, whose brute or molecular formula is: C21H26N2O3 is an alkaloid extracted from the minor periwinkle (Vinca minor L.).
It is a substance that comes in the form of yellow crystals with a melting point of 232-233 ° C.
Periwinkle is a plant that, in the medical field, is mainly used in the treatment of arterial hypertension; moreover, homeopathic preparations with an astringent character are obtained from the plant.
The active principles present in the leaves of Vinca minor are able to induce a peripheral, cerebral and coronary vasodilation; among these we remember that vincamine due to its properties is used to treat cerebrovasculopathies, central and peripheral vertiginous syndromes, and arteriopathies of the lower limbs.
Vinacmin is therefore believed to improve cerebral circulation, without any effect on arterial pressure, by decreasing vascular resistance and consequent arterial-capillary vasodilation, with increased blood flow. Furthermore, vincamine would be able to restore the aerobic phase of glucose metabolism and improve the ability of nerve cells to use oxygen. This would be demonstrated by the local increase in the arteriovenous difference of oxygen and carbon dioxide and by the decrease in lactic acid and pyruvic acid.
In therapeutic treatments vincamine is also used in the form of tartrate, hydrochloride and teprosylate salts.
From laboratory studies, on animals, it emerged that the drug focuses mainly on the liver, kidney, blood and heart.

The half-life is about 3 hours and 24 hours after administration the drug is present only in trace amounts. It appears that vincamine is hydrolyzed in the plasma, but it is also metabolized in the liver. After 72 hours after administration, approximately 62% of the administered dose is excreted in the urine and faeces. Only 4-6% is excreted unchanged.
Furthermore, in rats the LD50 is 75 mg / kg intravenously, higher than 1000 mg / kg subcutaneously and 1000 mg / kg orally.
In therapies in which vincamine is used, administration can cause gastrointestinal disturbances and ventricular arrhythmias. Fatigue and somnolence may occur at the start of therapy.
Vincamine is contraindicated in cases of known hypersensitivity and in pregnancy. Particular attention is advised in driving and in activities that require concentration, as the drug can cause drowsiness.