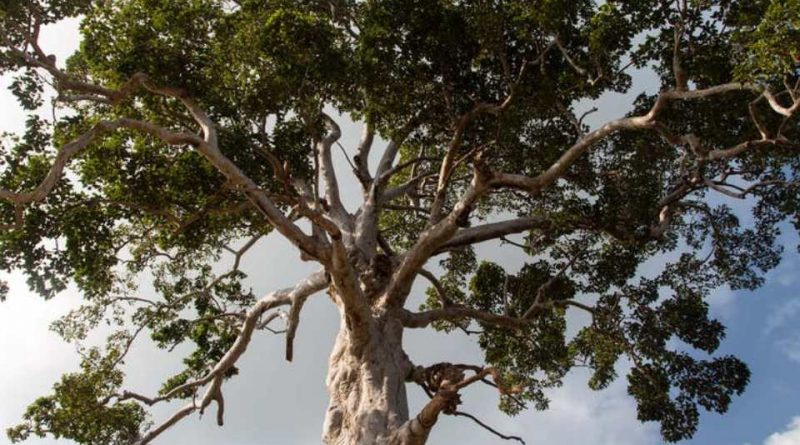 Etymology –
The term Dipterocarpus comes from the Greek words of (two), pteron (wing) and karpos (fruit), with reference to the fruit with two wings.
The specific epithet alatus comes from wings, wing wing: for fruits with wings.

Geographic Distribution and Habitat –
The Dipterocarpus alatus, as well as other members of the Dipterocarpacee is present in an area that includes the Indo-Malay region, from India to New Guinea, where they are often dominant both in the rainforest and in the one with seasonal rains; specifically, we find this plant in Eastern Asia, in Bangladesh, Myanmar, Thailand, Laos, Vietnam and the Philippines.
Its habitat is that of evergreen and dry deciduous forests where the plant is gregarious along the banks of the river and in the mixed dipterocarp forest and grows at altitudes up to 500 meters. 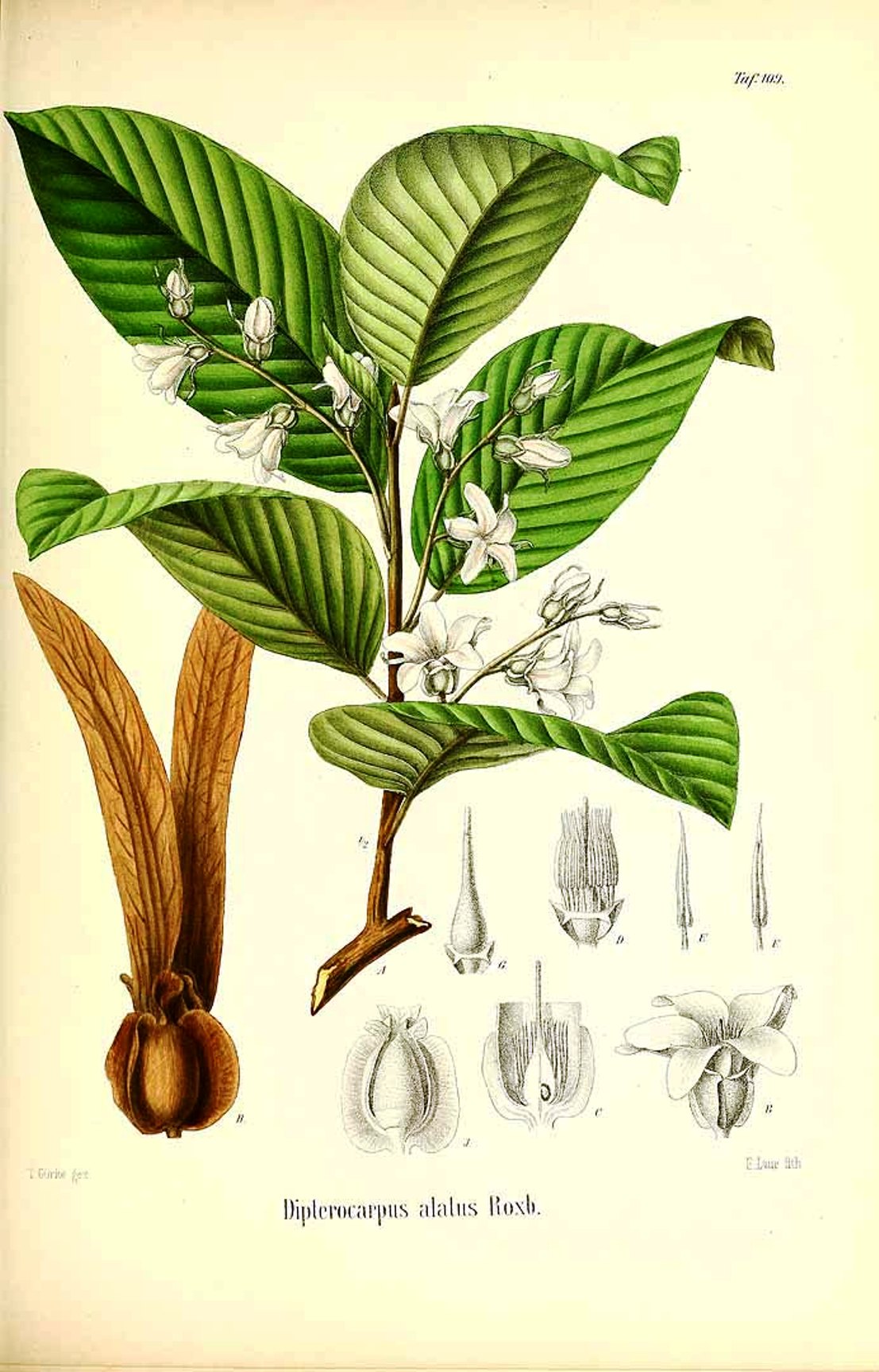 Description –
Resin tree is a medium to large evergreen tree with an umbrella-like canopy, which can grow up to 40 meters high and exceptionally 55 meters.
The trunk has a cylindrical shape, tall, straight, up to 150 cm in diameter, and can be branchless up to 20 meters in height.
The leaves are alternate, simple, leathery, evergreen.
The flowers, gathered in sparse inflorescences, complete, regular, showy and often perfumed; they have 5 sepals and 5 petals, sometimes fused at the base.
The fruit is dry (capsule or nut) and contains only one seed and has wings.

Cultivation –
Dipterocarpus alatus is a plant of the lowland tropics where it is found at altitudes up to 500 meters and where it grows best in areas where annual daytime temperatures are between 22 and 32 ° C, although it can tolerate 10-36 ° C.
This plant cannot tolerate temperatures below 5 ° C. it seems that he prefers an average annual rainfall of 1,100 – 2,200 mm, uniformly distributed throughout the year, even if according to other authors his preferred rainfall regime is of 3,500 – 4,500 mm, but can tolerate 3,000 – 5,200 mm.
The plant, especially when young, is very shade tolerant and the seedlings can survive for years in dense shade.
However, as trees age, they become more demanding in terms of light.
In nature, the plant prefers alluvial soils and prefers a pH between 5 and 6.5, tolerating 4.5 – 7.
Plants of this genus generally regenerate only naturally in the shade of the forest. Seedlings and saplings can persist for many years in the shade of the dense forest. In their first 2 years young plants cannot tolerate large openings in the canopy, but after they are well established (about 120cm high) the canopy can be opened around them to accelerate growth.
The annual production of oleoresin per tree is between 23 and 31 liters.
Trees have a thin bark and are very sensitive to fire damage.
Propagation can take place by seed even if this has a short vitality and therefore should be sown as soon as it is ripe. However, no pre-treatment is required and sowing in a nursery is recommended; germination usually begins within 4 – 7 days at 25 ° C.
The seedlings are ready for transplanting when they are 30 cm tall, which takes about 8-12 months.
Seed storage behavior is intermediate, the lowest safe moisture content is 17%, no seeds survive further drying up to 8% moisture content. With a moisture content of 12%, germination of only 36% occurred after 939 days of airtight storage at -18 ° C, compared to 80% viability before storage.
Dipterocarpus alatus can also propagate through cuttings taken from coppice shoots. These root successfully with 44.5% rooting.

Customs and Traditions –
Dipterocarpus alatus is a plant known by various names in various languages: Thai: ยาง นา, RTGS: yang na, Khmer chhë tiël ba, chhë tiël tük, chhë tiël thom o chheuteal, Vietnamese: dầu nước, dầu rái.
It is also known as the resin tree or Apitong.
It is a tree threatened by habitat loss and is listed as “Endangered” on the IUCN Red List of Threatened Species (2009).
This plant is gregariously present along the banks of rivers and is an important species for the regeneration of the cleared land around the Dong Nai River and Cat Tien National Park.
Dipterocarpus alatus is one of the most important woody species of southern Asia, where unfortunately it is widely deforested for commercial uses; this plant is also appreciated for its essential oil and oleoresin.
It has also been used for some time as a medicinal plant. The resin obtained from the trunk is disinfectant, laxative, diuretic, slightly stimulating. It is used in analgesic liniments and can be mixed with beeswax and then used as an antiseptic in bandages on ulcerated wounds.
The bark of young trees, with just 2-4 leaves, is believed to have medicinal virtues against rheumatism and liver disease.
From this plant, as mentioned, an oleoresin is obtained with good yields.
This is used by the natives for lighting and waterproofing baskets and boats.
In the industrial field it is used for paints (zinc-based); in the printing ink industries; paints for walls and furniture; and lacquer; it can also be used as a fuel in diesel engines.
The wood of this tree is quite hard, fine-grained, easy to saw and polish.
The heartwood is reddish-gray while the sapwood is white. It is a wood that is not very resistant in contact with the ground. In Thailand, however, it is one of the most important commercial timber species, alongside teak.
Wood is used for construction, railway sleepers, boats, wood pulp and a number of other purposes. Furthermore, due to its resinous nature, it is less suitable for flooring or for exposure to the sun.
Wood is used as a fuel and to produce coal.
In general it is an important source of sawn timber.
In Cambodia, wood is highly valued in construction and carpentry when it is not exploited for its oily resin.
In Vietnam it is often planted for the shading of the avenues.
The agroforestry uses are also important: it is a plant with the ability to rapidly colonize alluvial soils along the banks of rivers; it is used as a pioneer in forest planting schemes to restore wastelands and to stabilize woods.
Finally, the tree is used as a soil improver; it has been shown that the organic matter and the NPK content of the soils under the canopy of trees are higher than in the soils further away from the tree and also for this reason the tree is commonly associated with fruit trees.
However, no edible uses are known.
Among the known risks it should be noted that wood dust causes boils and skin rashes.

Preparation Method –
Resin tree, as mentioned, is a plant from which a resin can be obtained. The resin is obtained by making a hole in the trunk near the base (about 90 – 150 cm from the ground) and then dipping the resin with a spoon as it collects. To prolong the flow, a fire is produced at intervals fueled by dead leaves or brushwood in the hole; this burns the dried resinous film and allows the resin to flow again.
In addition, an essential oil is obtained from the plant, called yaang oil which is used as a fixative in perfumes.