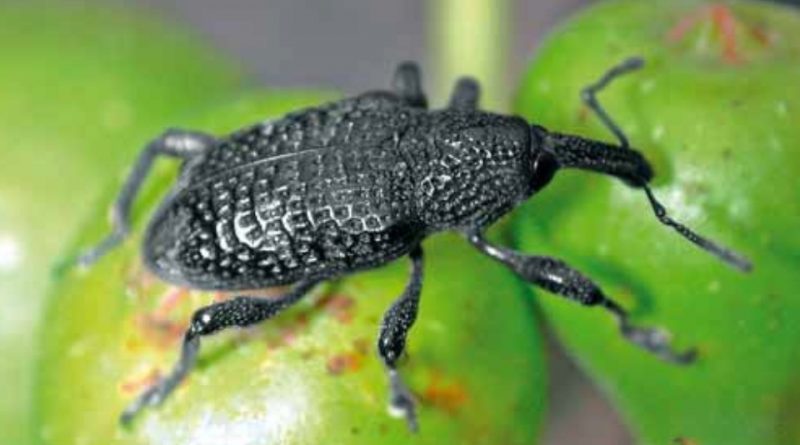 The black fig weevil (Aclees cribratus Gyll.) Is a beetle belonging to the Curculionidae family.

Geographic Distribution and Habitat –
The beetles of the genus Aclees are insects present in an area of ​​East Asia which includes: China, Japan, Taiwan, Borneo, Myanmar, Java, Laos, Sri Lanka, Micronesia, Solomon Islands and in Australia, in equatorial Africa to the south of the Sahara and Madagascar-
Aclees cribratus is present in a smaller range that includes: China, Borneo, Java, Myanmar and as a result of import, India.
Subsequently, the insect, due to imports, appeared in Europe (first reports in France and Italy). 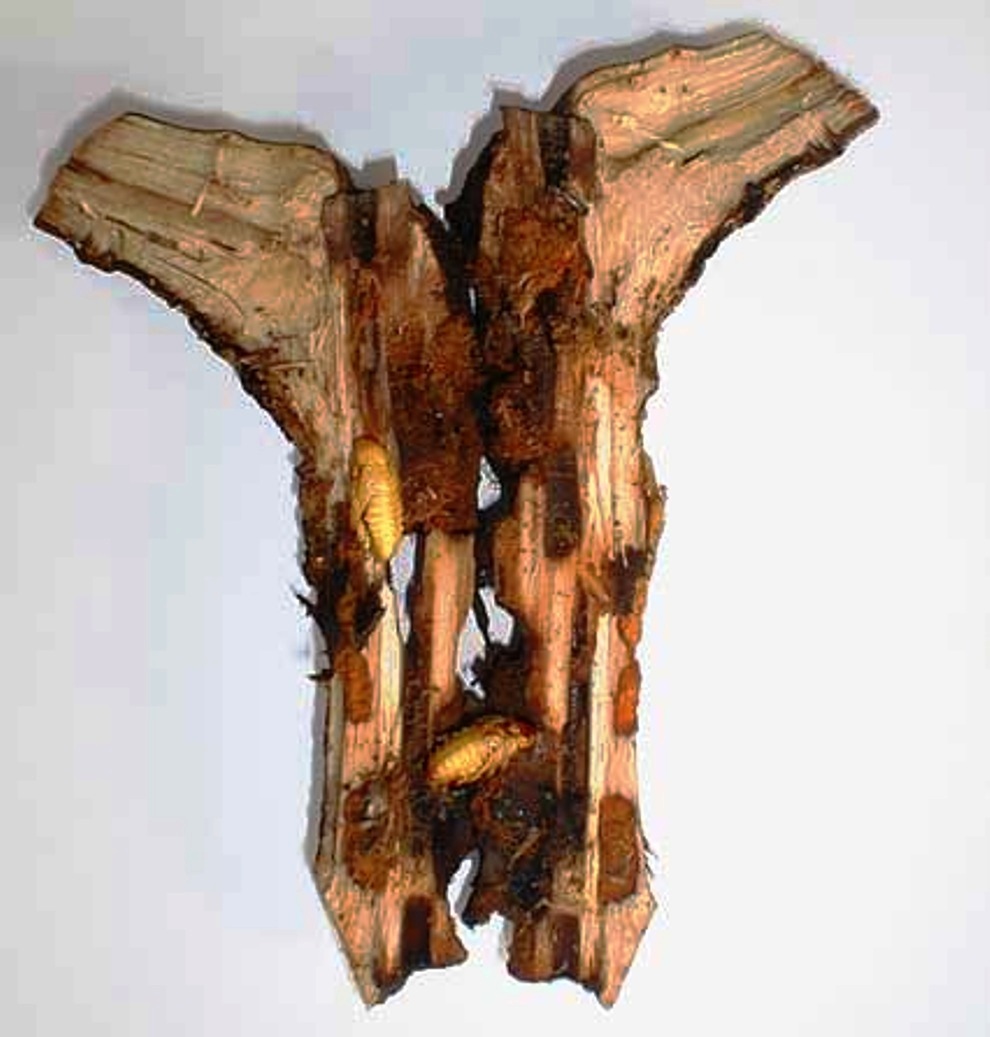 Morphology –
The black fig weevil is a large weevil, with moderately bright black integument and elongated rostrum and antennae inserted at its tip. Unlike the other species of the genus Aclees, it has a broad pronotum, slightly narrower than the base of the elytra, covered by punctuation extending forward towards the head.
This beetle, both for its size and for its appearance, can be confused with other species of the same tribe of the Hylobiini already present in the European and Italian territories.
Mature larvae measure just over 15mm in length.

Attitude and Life Cycle –
As for the biology of this insect, it has been observed that the female digs holes in the bark, with the long rostrum, and then lays an egg on the bottom. This operation is usually performed on injured or broken branches apically.
The larva digs irregular tunnels between the bark and the wood.
The pupal stage lasts up to 10 days and the development cycle is completed in approximately 40 days.
Aclees cribratus is an amphigonic species linked to Ficus spp. and many of its varieties. In already controlled cases, the larval stages are hypogeal endophageal xylophages while the adults feed on the sycones (infructescence) of the host plants producing on these typical erosions, with particular choice of their size and position on the branch.
The adults, after the flickering that begins from the second decade of September, until October and beyond, do not remain in the ground but go out and take shelter among the grassy mantle or elsewhere to return and rest on the nurse, in the evening or during the day, to feed, as long as the climatic conditions are favorable and, moreover, in the period necessary for oviposition.
For nutrition, the sycones at the apex of the branches are preferably eroded, while those in a more advanced state of development or in other locations are less appetizing. From October onwards, beetle larvae are found in the first vital stages in the wood of the cuttings and mating adults.
In the absence of the preferred nourishment, in captivity (laboratory), infructescences of all sizes and leaves are devoured while the wood of the twigs is affected with typical decortications.
To date, in-depth studies are underway to better establish the duration of the cycle and of each evolutionary phase; the number of generations; the biotic and abiotic factors that influence the development of the beetle and other details useful to protect crops from possible infestations.

Ecological Role –
Aclees cribratus is a beetle that damages Ficus carica in all cultivated varieties. It has been confirmed that the presence of larvae, with a strictly internal life to the plant, is not easily identifiable until the infested woody tissue is completely decayed; at this point the roots of insertion of the roots in the buried part of the cutting can also be damaged.
The invaded areas can also host 8-12 very voracious individuals of different ages.
The external symptoms can be detected through the epigeal part of the plant that accuses desiccation, brachization, reduction of vigor, alterations and leaf yellowing that make the affected subjects unmarketable.
The fig, rustic and vigorous fruiting, in some cases tries to react with the emission of adventitious roots above the compromised area, but production times and costs become unsustainable.
As for the monitoring of the presence of the insect, it was found that the failure of the various defense attempts put in place by the nurserymen, the first investigations and the parallel tests of struggle undertaken confirmed that it is not possible to reach and overcome the stadiums. preimaginal of Aclees cribratus by exploiting the biotoxic action of microorganisms (biological insecticides or bioinsecticides) or by resorting to chemical pesticides.
This is because the pre-grown phases are well sheltered and protected in the underground wood and furthermore the type of cultivation in pots of the fig tree (typical of nurseries) would raise distribution difficulties and possible imbalances to the success of the crop.
It has been seen, however, that adults can be affected when they come from outside to feed on the nurse or reach the vessel in which it is contained for oviposition.
It is still a question of specifying in what epochs these bioethological phases occur in time and space, with further studies and insights.
However, similar to the behavior of the similar beetle A. hirayamai which is attracted to light, it is possible that A. cribratus, a good flyer, behaves in the same way, making possible monitoring viable through the use of light traps.
Finally, it is possible that intensive breeding techniques, typical of nursery breeding or some crops, create more favorable conditions for this beetle. In this case, it is also necessary to carry out further investigations on natural predators with identification of those useful for the containment of this insect.