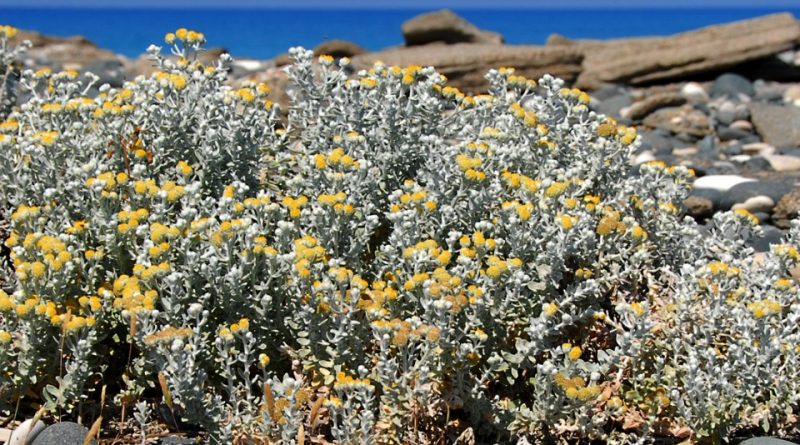 Etymology –
The term Achillea of ​​the genus was dedicated to Achilles (in Greek Aχιλλειοϛ Achilleios), mythical Greek hero who would have used some species of this genus to heal the wounds sustained in battle by his soldiers; a very ancient remedy so much so that this is one of the medicinal herbs found in an Iraqi necropolis of Neanderthal man dating back to 60,000 years ago. The name Achillea was already present in the De simplicium medicamentorum facultatibus of the Greek physician Galen (129-200 AD).
The specific maritime epithet is in reference to the sea: maritime, marine, which grows near the sea.

Geographic Distribution and Habitat –
The Cottonweed is a species with a Mediterranean-Atlantic distribution found along the coasts of the Mediterranean and the Atlantic coasts of Europe.
In Italy it is present in all central, southern and island regions.
Its habitat is that of sea dunes, on very primitive sandy soils, with an optimum in the Mediterranean belt, up to 50 m. s.l.m .. 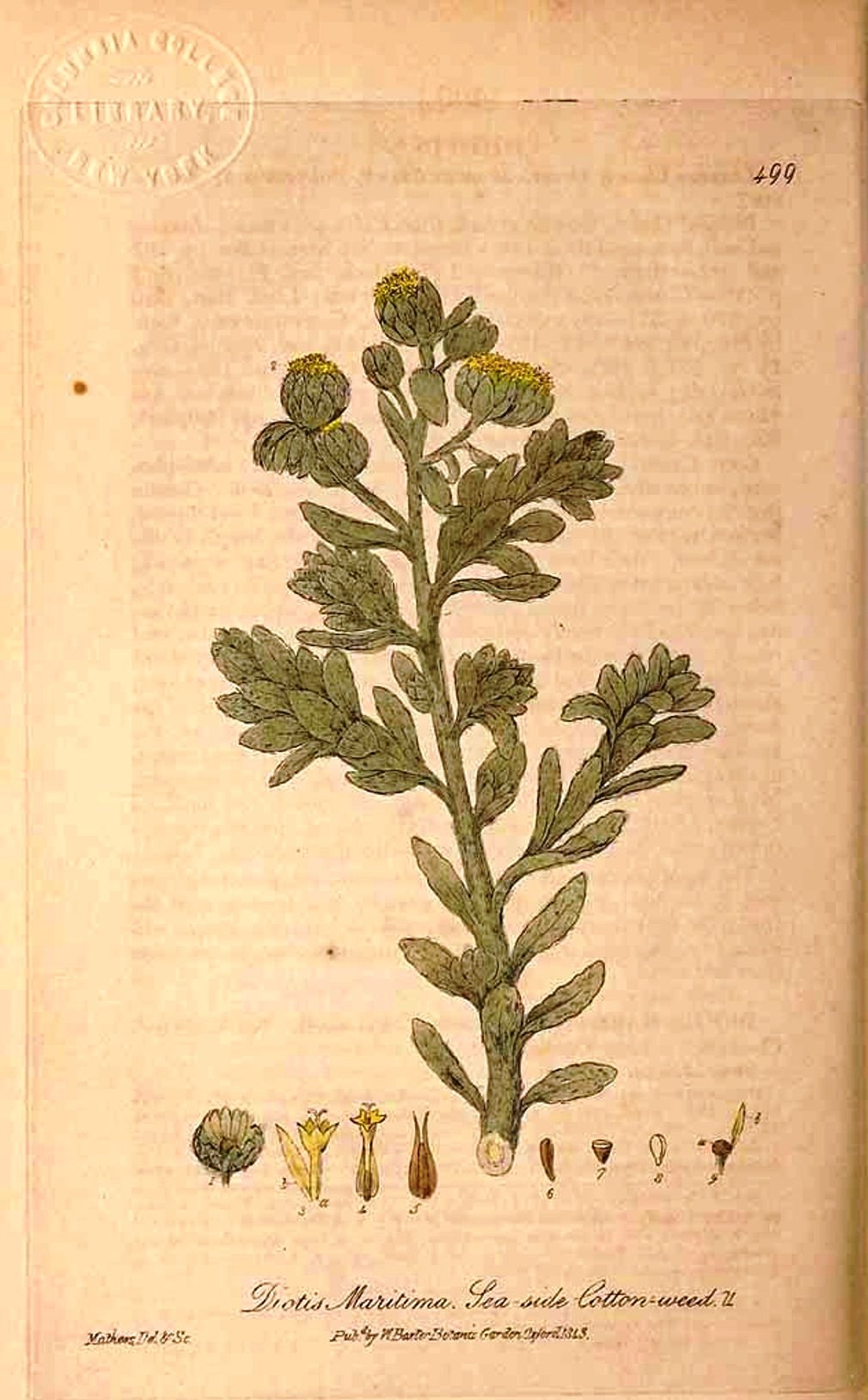 Description –
Achillea maritima is a bushy plant that reaches 40-50 cm. in height. It appears tomentosa due to the presence of thick and felted white hairs.
The stems are woody, large erect or prostrate, simple or briefly branched.
The leaves have oblanceolate oblance-shaped shape at the apex with alternate lamina slightly crenulated at the edges.
The flowers are grouped in a dense terminal corymb formed by a few pedunculated, small and subglobose flower heads, imbricated envelope with ovate-obtuse white cottony scales.
The flowers are yellow-gold hermaphrodite tubular, enclosed within the envelope, a corolline tube compressed at the base.
The antesis is between June and September.
The fruit is an oblong and angular cypsela (achene) about 4 mm long, devoid of pappus, white-brownish in color.

Cultivation –
The Cottonweed is a spontaneous species that grows along the undisturbed dunes of some areas of the Mediterranean and Atlantic Europe.
It therefore grows in coastal dune systems, mainly embryonic and primary, but also secondary, preferably located in the areas most exposed to the wind and on the crests of the dunes, up to about 50 m of altitude.

Customs and Traditions –
The Achillea maritima, despite its large dispersal area, is a species clearly threatened by human action on coastal dune systems, such as inappropriate urbanization or insensitive recreational use. Another cause is the uncontrolled harvesting of the plant, especially in the past, due to its medicinal qualities. Other factors are coastal regression and competition from exotic species. For all these reasons, in the Iberian Peninsula the species is considered extinct in the Basque Country and Cantabria, and is included in the catalogs of threatened species to be protected in Asturias, the Valencian Community and the Balearic Islands, as well as in the list of rare endemic plants or threatened by Spain. In some places its recovery has been obtained, as in Formentera, thanks to a massive repopulation. In Galicia it is still relatively abundant for the moment.
In Italy it has not been found for some time in the coasts of the Marche and in some areas where it was previously present.
The continuous anthropization of these environments puts its survival at risk and for this reason it is also included in the IUCN red list of Italian plants.

Preparation Method –
The Cottonweed, even if considered a plant with medicinal properties, like other species of its genus, should not be used at all, and therefore collected, because it is a plant in danger of extinction.