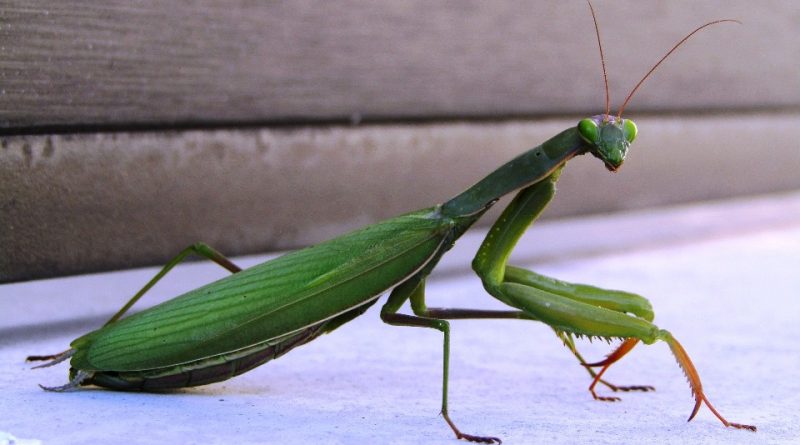 The European mantis (Mantis religiosa Linnaeus, 1758) is an insect belonging to the Mantidae family.

Geographic Distribution and Habitat –
The European mantis is a species native to Africa from where it then spread to southern Europe and Asia Minor. Furthermore, since 1899 it has also been present in North America, where it seems to have been accidentally imported with a load of nursery plants.
Their habitat is that of areas where temperatures are highest, in fact their presence is considerably lower in Central Europe and almost nothing in Northern Europe. In Germany they are considered protected animals and their capture is prohibited.
It is quite common in Italy and present throughout the territory, from the pre-alpine areas to the coastal strip, including the islands.

Morphology –
European mantis is an insect with sexual dimorphism; the female, in adulthood, is up to about 7.5 cm long while the male measures up to 6 cm.
The front legs are raptatory and are held raised and joined like hands in prayer (hence the name) and perform the function of capturing the insects of which the species is a voracious predator.
The abdomen of the male specimens is divided into eight segments, while in the females in six.
It has a color that varies from bright green to light brown.
It has two black patches, one for each foreleg on the inner side, similar to an eye when displayed for defensive purposes.
It has two pairs of wings attached on the back in correspondence with the pair of hind and middle legs.

Attitude and Life Cycle –
European mantis is characterized by post-nuptial cannibalism: the female, after having mated, or even during the act, devours the male starting from the head while the genital organs continue in mating. This is a behavior subordinated to the need for proteins useful for the rapid production of eggs; in fact in the bred specimens, if well fed, the females spare the male.
After mating, the praying mantis lays eggs in large and complex oothecae that are often found attached to stones in sunny places; each ooteca contains an average of 60-70 eggs but can reach up to 200 eggs.
The nymphs are born in the period between May and June and become adults in August.

Ecological Role –
The European mantis is an insect that easily camouflages itself among the leaves, where it waits motionless for its prey. To defend itself against attacks from antagonistic insects, the mantis suddenly opens its wings to appear larger. In addition, to defend itself it can produce a sound similar to a hiss, rubbing the abdomen on the wings.
Its diet consists of flies, crickets, moths and other small insects and sometimes also of small reptiles and amphibians but it tends to prefer locusts, green grasshoppers and crickets and also devours spiders, beetles, cockroaches and larvae.
It is an easy insect to breed and it is possible to make it live in terrariums where there are live plants and where a good humidity must be maintained inside the case.