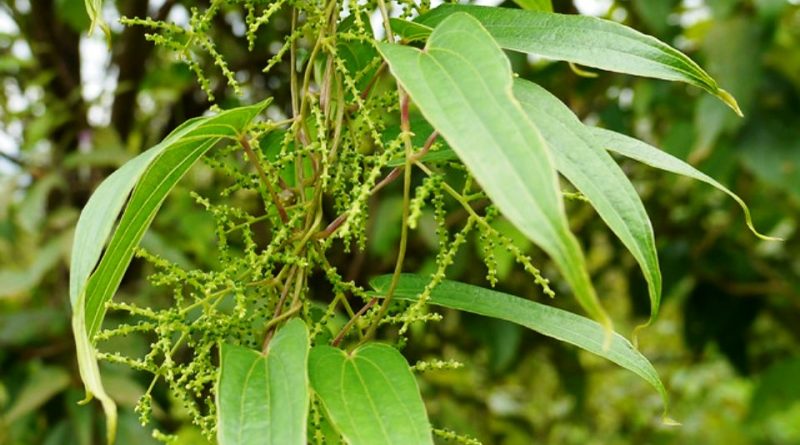 The Chinese Yam (Dioscorea oppositifolia L.) is a climbing shrub species belonging to the Dioscoreaceae family.

Etymology –
The term Dioscorea of ​​the genus was dedicated to Pedanio Dioscorides Anazarbeo (of Anazarbo Asia Minor), doctor of Greek culture, botanist and pharmacist, who lived in the first century AD.
The specific epithet oppositifolia comes from opposite oppósitus and from fólium leaf, lamella: with leaves arranged in pairs on opposite sides of the stem.

Geographic Distribution and Habitat –
Chinese Yam is a plant native to Myanmar and the Indian subcontinent (India, Sri Lanka, Bangladesh).
It is a plant with high adaptation to different habitats and environmental conditions but is most commonly found on the edges of rich mesic forests of the valley floor, along the banks of streams and waterways and near fences.
It is a plant with a high diffusion capacity related to anthropic activities such as near old ruins and along the roads. From these areas it can easily spread to nearby riparian aquifers and undisturbed habitats. Although this plant can tolerate light levels ranging from full sun to full shade, it grows mainly in half shade conditions and along forest edges as it is often associated with riparian habitats, where it prefers loamy and loamy soils, typical of habitats. alluvial. 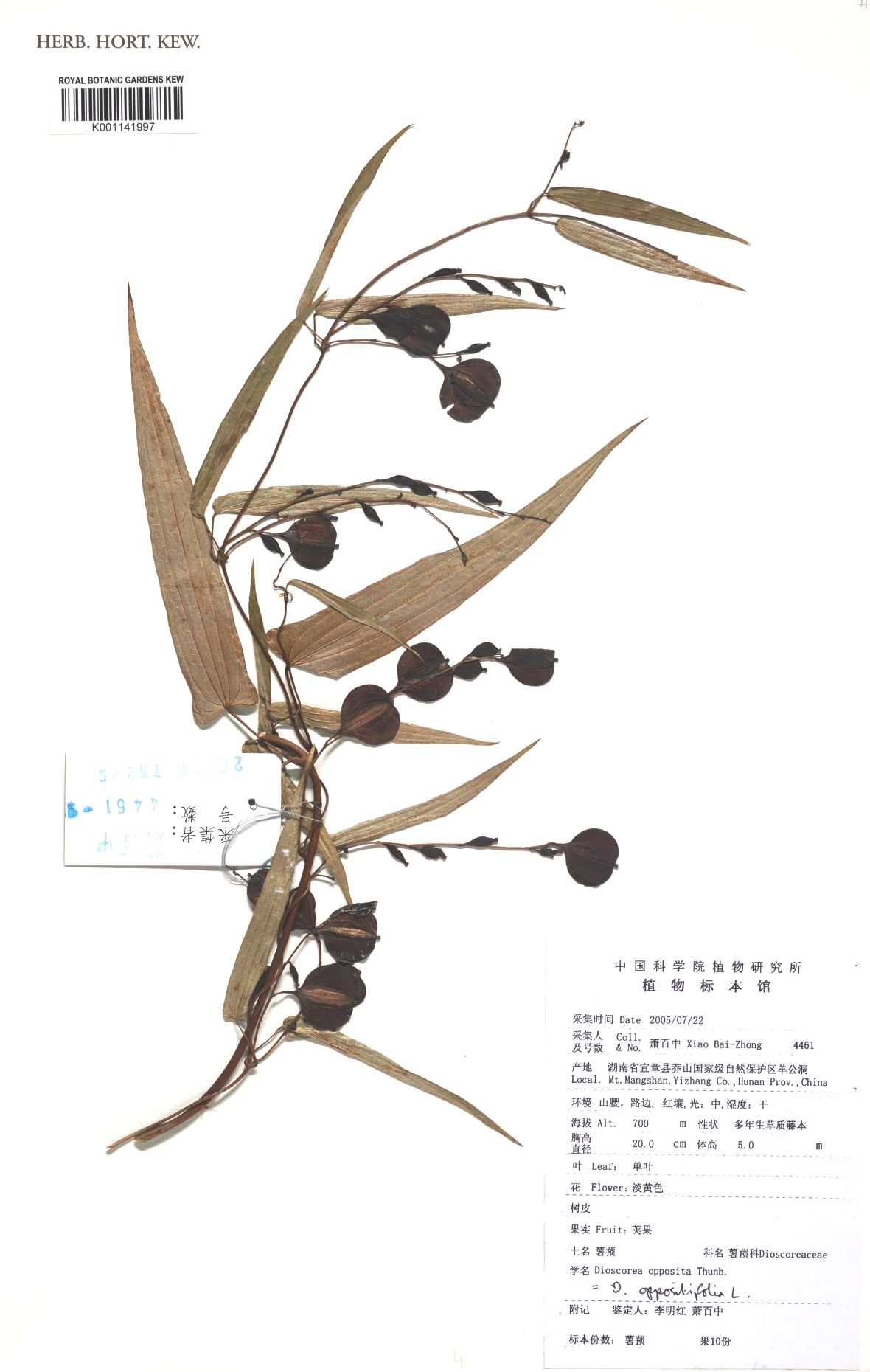 Description –
Dioscorea composita is a perennial climbing plant that grows from a deep, persistent root-like tuber up to 1 meter long that regenerates annually.
The stems are round and thin and twisted spiral upward (from left to right, counterclockwise).
The leaves are generally arranged opposite, although they can be alternated in the upper nodes, and occasionally arranged in a ternal way in spirals of 3. The leaves are simple, with 7 to 9 veins, 4 to 8 cm long, and typically of ovate, jagged or sagittate shape. The leaves generally have a deeply lobed base, a sharp tip and are purple-red along the leaf margins, petioles and stems. New leaves often have a characteristic bronze tint.
The flowers are small, white (greenish-yellow) and smell of cinnamon; they are unisexual (dioecious plants) and arise from the axils of leaves with spike or paniculate inflorescences.
The fruits are membranous capsules with three angles.

Cultivation –
Dioscorea oppositifolia is a plant that can reproduce both sexually and agamically with which it reproduces vigorously through the production of small axillary propagules similar to potatoes, called bulbils. These bulbils exhibit a relatively low survival rate in the field (compared to the greenhouse), but the plants apparently produce an adequate number of bulbils to make up for their low survival rate in abundance. Each plant is capable of producing an average of 20 cloves per year.
Even bulbils partially eaten by rodents or cut into pieces by a tiller, are still capable of producing healthy plants. Bulbs are mainly dispersed by gravity but can be further dispersed by water or animals.
It is a plant that prefers relatively nitrogen-rich soils.

Customs and Traditions –
Dioscorea oppositifolia was formerly called D. opposita. However, Dioscorea alsoacareachya is often mistakenly also called Dioscorea opposita.
Some authors state that both tubers and bulbils of D. oppositifolia are edible, although the bulbils are generally not harvested and used for food. The tubers are edible, they can weigh up to 2 kg or more if grown in deep clayey soils; they are tasty and nutritious.
The tubers contain about 20% starch, 75% water, 0.1% vitamin B1 and 10 to 15 mg of vitamin C. They also contain mucilage, amylase, amino acids, and glutamine.
Tubers, in certain cases, are used as a tonic herb. They stimulate the stomach and spleen and act on the lungs and kidneys.
Tubers were eaten for treatment of loss of appetite, chronic diarrhea, asthma, dry cough, frequent or uncontrollable urination, diabetes, and emotional instability. Externally they are also applied to ulcers, boils, and abscesses.
Tubers contain allantoin, a cell proliferant that accelerates the healing process.
Some authors state that D. oppositifolia leaf juice can be used to treat snake bites and scorpion stings. Its roots contain diosgenin, which is a compound often used in the production of progesterone and other steroid drugs.
This plant has traditionally been used as a contraceptive and in the treatment of various disorders of the genital organs, as well as for asthma and arthritis.
Among other uses, it should be remembered that this plant is frequently planted for its ornamental value.
The flowers smell of cinnamon and the plant is attractive for pergolas, trellises and porches.

Preparation Mode –
Chinese yam is a plant that, according to some authors, can be used for food, consuming both tubers and bulbils, even if the bulbils are generally not collected and used as food.
This plant, since ancient times, has been used through some preparations, derived from tubers or leaves for various medicinal uses.