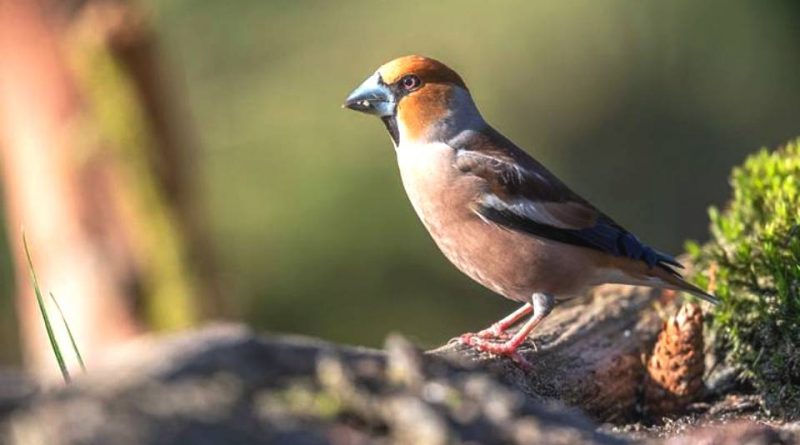 The Hawfinch (Coccothraustes coccothraustes, Linnaeus, 1758) is a bird belonging to the Fringillidae family.

Geographic Distribution and Habitat –
The Hawfinch is a species which, with its subspecies, is widespread over a vast Palearctic range that includes Europe, Asia, north-western Africa.
In detail we find it from the Iberian Peninsula to the Caspian Sea, north to southern Scandinavia and the British Isles (missing in Scotland, Ireland and Iceland) and south to North Africa (where it inhabits the Atlas Mountains), in Central Asia (Kazakhstan, Kyrgyzstan, Tajikistan and eastern Afghanistan) and eastern (Manchuria, Korea, northern Japan, while in Siberia and Kamchatka the species is present only in summer). Furthermore, more occasionally, it is also reported along the coasts of Alaska, albeit with accidental and solitary presences.
In Italy it is a species residing in the North, in Sardinia and along the peninsular Apennine arc, while in the Center-South and in Sicily it winters.
Its habitat is that of deciduous and mixed woods, at any altitude, with dense undergrowth but also in parks and orchards and for this bird the presence of permanent water sources and above all the massive presence of fruit trees is fundamental; outside of this habitat it is more rare ..
The Coccothraustes coccothraustes, in the spring – summer period, can be observed in oak, holm oak, beech or mixed deciduous woods which in addition to the aforementioned trees also see the presence of ash, elm and maple trees, which ripen their seeds in this period. during the autumn period it moves towards woods with the presence of hornbeam, yew, plum and cherry trees.
It also colonizes however the orchards, parks and gardens, although rather rarely also due to the natural rarity and distrust of these birds. 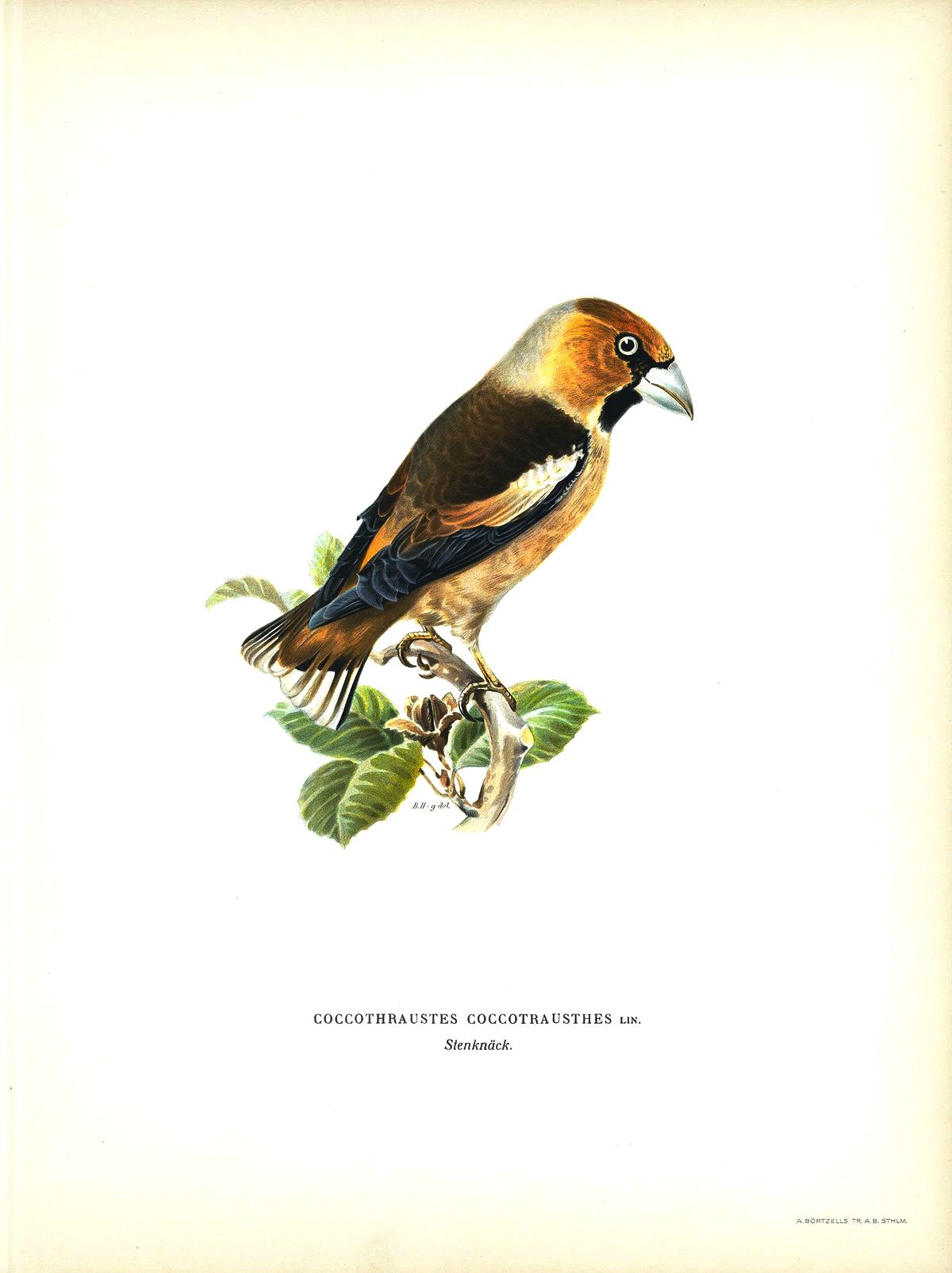 Description –
The Hawfinch has a length of about 17 cm, with a wingspan of 31 cm, for a weight that is around 60 grams. There is some sexual dimorphism with, at the same age, females having slightly smaller dimensions and more slender appearance than males.
It is a bird of easy identification due to its large, round and brown eyes, a large metallic blue beak in summer and yellowish in winter, a very large head colored brown, with back and belly also brown, mask, throat and tip of the black wings and white wing bar.
The wings are dark brown in the proximal part and bluish in the distal part, with a band of white feathers to separate the two colors: the tail is brown in color that tends to darken towards the distal part until it becomes black at the tip and on the edges, where white feathers also appear.
The paws, rather short and flesh-colored, have four toes, of which three forward and one facing backwards.
The female and the young specimens have a less contrasted color, tending to gray. Furthermore, the young have a yellow spot on their throats.
Eggs generally measure 20-28 mm in length and 16-18 mm in width; they have an extremely variable color, which varies from blue-greenish to gray, with the presence of dark spots.
It is distinguished by the typical upright and hopping walk.
The verse of the Coccothraustes coccothraustes is a metallic “zic”, repeated at regular intervals and stronger when the animal is in flight; this bird can also emit a short chirp while moving among the vegetation, or hissing noises when excited or frightened.
The real song is very similar to the basic verse and can be heard mainly between February and the first of June, although it is possible from time to time to hear isolated specimens singing outside the period: singing is a prerogative of males, although even females are able to sing.

Biology –
In the Hawfinch the reproductive period begins towards the beginning of April and, as a rule, carries on a single brood a year, even if in the places and in the years where the hot season lasts particularly long (or if the first brood is lost) can carry on two broods.
These birds during the amori season tend to show a rather marked territoriality manifested:
– both in nesting in small colonies in which each couple defends a small range around their nest and all together take care of the defense of the nests from any intruders or threats;
– both because of the fact that some couples, which nest singly and defend even quite vast areas, can even include the entire wood in which the nest is located.
Among the behaviors it should be noted that the male, during courtship, insistently follows the female with a zigzag pattern; usually the female reacts hostile to the male’s attentions, but after a certain period of distrust she begins to show interest, ceasing to flee and stopping to observe the aspiring partner who positions himself, at this point, with his wings slightly spread and lower until it touches the ground, keeping the tail open. At the same time the female keeps her feathers attached to her body as much as possible, and then moves away by hopping or flying not far away, with the male abandoning his position to follow her: at this point, he lowers his head towards his chest and performs a sort of bow, to allow the female to observe the gray nuchal band, and then approach it walking with spread wings. If the female agrees to mate, she keeps her beak slightly open and allows the male to touch it, mimicking the offering of food.
After mating, the construction of the cup-shaped nest begins and takes place in the period between late April and early May. It is the male who spends a few weeks looking for the best place to locate the nest, repeatedly visiting the places deemed suitable to start construction. The construction, however, is carried out only by the female, with the male participating only in the placement of its first structures. The materials used to build the nest are made up of grass stems, twigs, lichens, which are positioned and intertwined to form a cup that is lined internally with hair. The nest is positioned at variable height, which oscillates between 7 and 20 meters but almost never less than 3 meters; the nest is usually located on large trees, but Hawfinch nests can also be found in very leafy shrubs.
For each brood a variable number between 4 and 7 are laid, with an average of 5.
The incubation of the eggs is around 12 days and is operated only by the female, with the male in charge of procuring the sustenance.
The pullets are covered with abundant white down and have a pink mouth and tongue, with the front part of the palate a brilliant purplish red color with whitish growths.
The pullets are fed by both parents with insects and larvae and are able to fly around at 10-12 days of age, although the parents continue to care for them for at least another two weeks.
The life expectancy of these birds can reach 5 years but it is rare that they are able to live for more than one breeding season.

Ecological Role –
The common froson is a partially migratory bird with populations residing in cold areas that can migrate south to spend the winter in milder climates (where it is not certain that there are not already settled populations of froson with which the migrants can aggregate and possibly stay or be followed on return), and then return to the original area.
The migration of this bird can also have the range of some thousands of kilometers.
As for its diet, it feeds on seeds of fleshy fruits, even the very hard pits of cherries and peaches which it crushes with the large beak to which this gives a force equivalent to 30-50 kg which allows it to split even the pits of ‘olive.
Among the most common foods of this bird we remember the pine nuts, the fruits of the rowan of the fowlers and the buds and inflorescences of beech: this bird also nourishes fresh buds, berries and fruit, while it is rare that it goes down to the ground to look for seeds and grains . The diet changes according to the season.
During the spring months it also feeds on larvae, caterpillars and insects, which it is able to capture in flight. In general, the diet of the Hawfinch is very varied and depends above all on the ripening season of the infructescences of the trees in the area in which this animal lives: therefore in the summer months these birds feed mainly on the fruits and seeds of plants such as elm, hornbeam, maple and beech, while starting from the beginning of the cold season they fall back on the fruits of rose, dog rose and hawthorn, and then support themselves on acorns and yew fruits during the winter.
From the behavioral point of view, the Hawfinch is a very shy bird and rather difficult to observe even in the areas where it is resident and very common, as it generally tends to move with extreme caution and at the slightest noise it tends to take refuge in the dense vegetation.
Although it is not territorial outside the reproductive period, with respect to the other birds of the same size it places itself in a dominant attitude, claiming for itself the best perches for the night and access to sources of food and water even in an aggressive manner.
Furthermore, small groups of birds tend to form in correspondence with the food sources, especially during the cold months when it is scarce, which tolerate each other without problems.
According to the IUCN, the Italian population of Coccothraustes coccothraustes is currently stable.