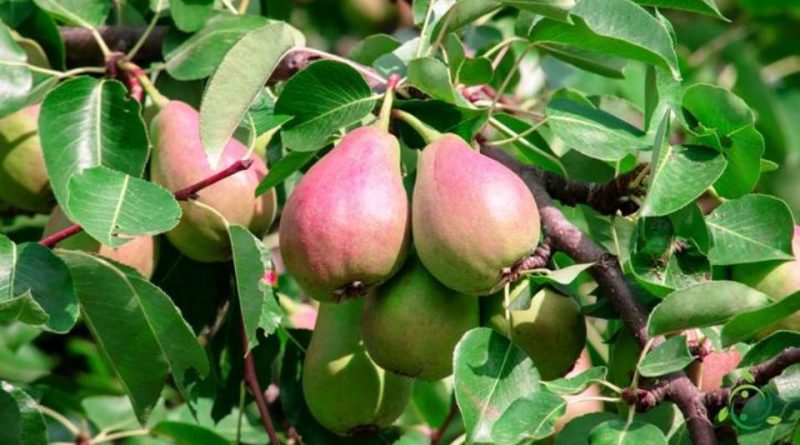 When pruning the Pear

The common pear (Pyrus communis L.) is a plant native to the central and eastern areas of Europe, and to the south-western areas of Asia. It is a plant that can reach a height of 20 meters, pyramidal in shape in the first years and tendentially globular when ripe.
The pear tree has wood and mixed buds carried by different fruiting branches, that is, by darts, lamburde, brindilli and mixed branches and the fruit is a false fruit called pome.
The pear is a rather plastic plant in the forms of breeding although it should be borne in mind that the production passes from the brindelli and mixed branches in the first years, to the lamburde. The evolution of the forms of breeding in the pear tree has passed from shapes in volume such as the vase to the anticipated and irregular palmette, to the spindle, then a main axis with exploitation branches, to the vertical cord and the V shape.

Pear pruning period –
The pear tree, like most fruit plants, should be pruned in the period that corresponds to the vegetative rest, therefore in the autumn and winter season. Moreover, since it is good not to let the freshly cut parts be subject to damage due to winter frosts, it would be advisable to prune just before the growing season which corresponds approximately to the month of February. However, pear trees are resistant trees and can also be cut in autumn, from November to early March.
In this period the so-called pruning of breeding and production takes place; green pruning, on the other hand, in which suckers and suckers are cut, is carried out in late spring or summer.
The breeding pruning is the one that serves to direct the plant towards the chosen form, it is carried out starting from the moment of transplanting for the first period, while after three or four years the plant will be formed and we will pass to pruning that have the purpose regulate production and not just to maintain the shape of the plant.
Obviously, as said about the training systems, the pruning of pear tree formation depends on the chosen form.
Green pruning, on the other hand, has the task of balancing the relationship between vegetation and fruiting of the plant, so this technique mainly consists in eliminating parts that absorb energy from the plant without bearing fruit. It also allows the balance of the foliage to be rearranged, removing the suckers and removing excess branches.
It is evident that not all varieties and forms of farming require this intervention, which is carried out during the summer and which mainly involves the elimination of suckers from the base of the trunk and vertical suckers from the branches of the plant.

Production pruning is the one that is performed every year between autumn and winter to have a better production. For details of the pruning technique, see the following sheet. Furthermore, in order to prune a pear plant well, it is necessary to know the different types of branches and how the plant forms buds, flowers and therefore fruits on them. In detail, it is good to know that this plant has various types of branches:
– Brindilli or Spur; these are mixed, thin, one-year-old branches that have wood-like buds on the branch and apical flower buds. For many varieties of pears, the apical buds of the brindilli are very important for fruiting;
– Lamburde; these are very short branches, about 5 cm, with apical buds. Moreover, there are varieties of pear trees that predominantly bear fruit on lamburde. After the fructification, at the beginning of the lamburda, a woody swelling called bursa is formed, following the bursa the “rooster’s foot” is formed which is a repetition of bags.
This means that to understand how and which branches to cut you need a minimum of knowledge of the plant; that is, to understand, through knowledge or observation of the plant, if it bears fruit more on the brindilli, more on the lamburde or both.
There is therefore no general rule for the pear tree; one must know the variety or go and observe the branches and the formation of flowers.
Finally, a mention of varieties and rootstocks of Pear.
Major varieties include:
– Etrusca, Coscia, Santa Maria, William, Highland, Conference, Abate fetel, Harrow sweet, resistant to fire blight, Decana del comizio, Kaiser and Passacrassana. Among the above are the most widely used in addition to the early Morettini Butirra, the William Rossa, quite widespread;
– As far as rootstocks are concerned, the Franks, such as Common Franc, Fox and Farrold, resistant to OHF, and quince selections, such as Ba29, EMC, EMA, Sydo and Adams, are distinguished; the latter are not very suitable for drought and calcareous soils, except for the former.