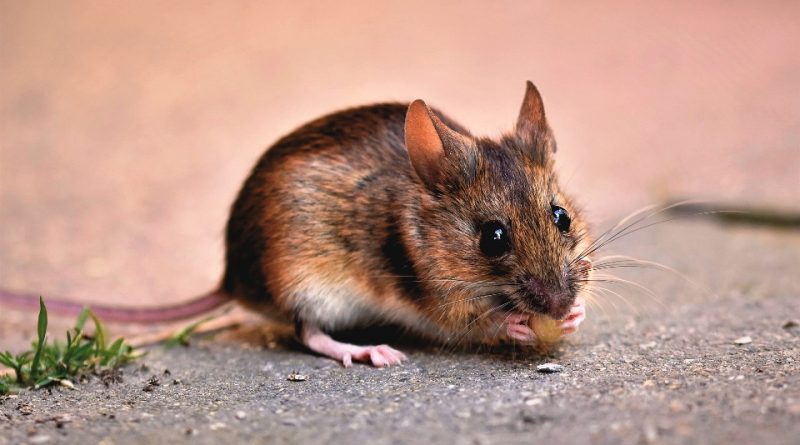 The house mouse (Mus musculus Linnaeus, 1758) is a rodent mammal belonging to the Muridae family.

Geographic Distribution and Habitat –
The House mouse is a species of probable Asian origin but now widespread in much of Western and Mediterranean Europe and in the rest of the world.
The spread has occurred over the centuries thanks to the trade of man by sea and by land.
In Italy it is present throughout the territory with the exception of the Island of Montecristo.
The habitat of Mus musculus is highly diversified as it is a highly adaptable and synanthropic species. This small rodent lives in virtually any place that offers it a place to hide and feed. It is mainly present in urban and suburban environments, where it lives at any altitude, while it is rarer in rural areas at high altitudes and in wooded environments.
It is normally absent where other animals compete with it, as it is not very efficient as an antagonist species. However, in some newly colonized areas, such as Australia and New Zealand, mice can coexist without excessive problems with other species of rodent with similar habits. 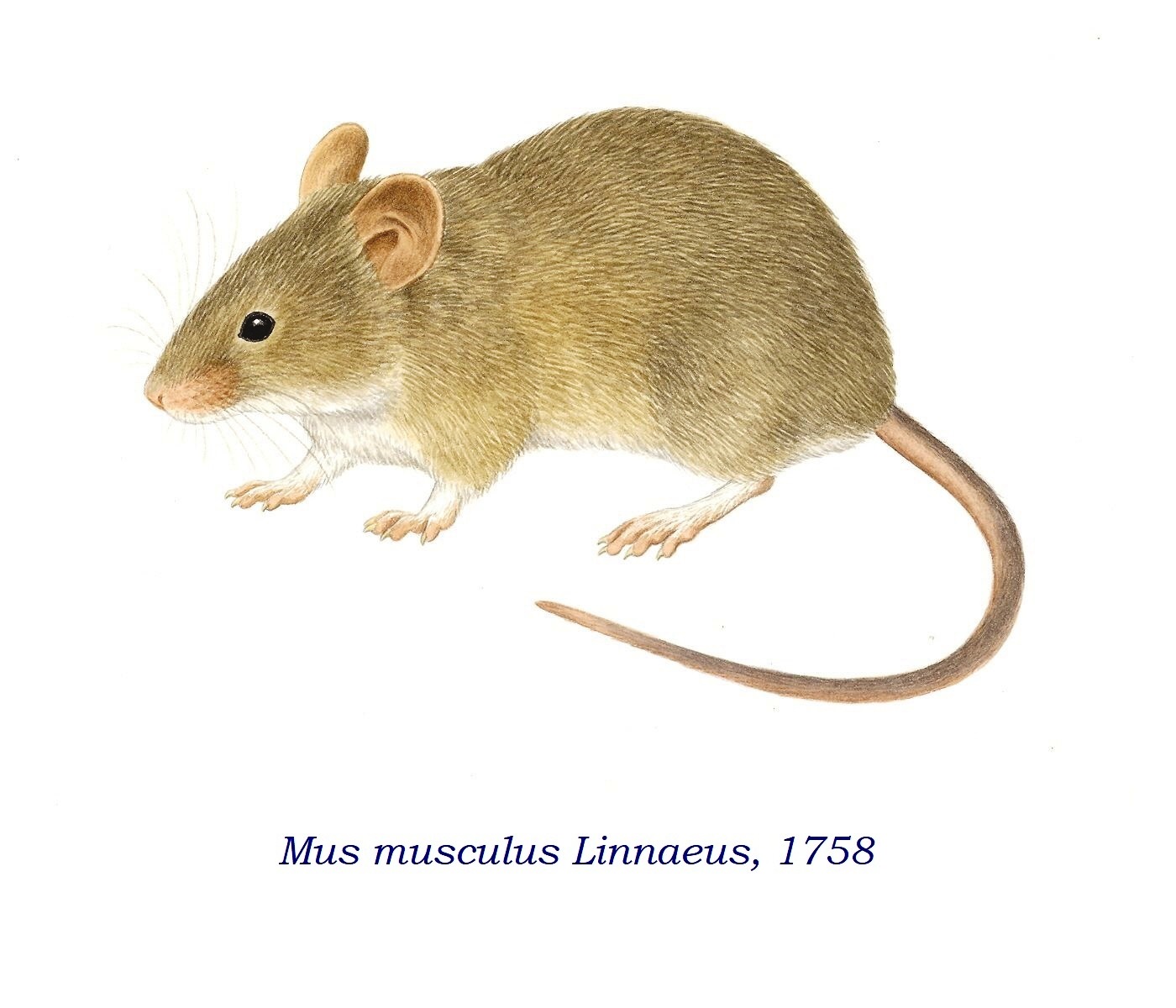 Description –
The House mouse is recognized for having a head-body length that varies from 7.2 to 10.3 cm, with a 6-10.2 cm long tail and for a weight that varies between 10 and 25 with more exceptional spikes. up to 36 grams.
It has a small, slender body.
The coat, short and shiny, in the upper part, has a variable color from brownish-gray to gray in various shades, below from whitish to light gray or yellowish gray with shorter hairs. The coat covers the entire body, except for the legs, ears, tail and tip of the muzzle, which are almost completely hairless and gray-pink in color.
The snout is pointed; elongated and rounded ears and small, dark and protruding eyes. On the tip of the muzzle there are also the sensitive whiskers, which have a tactile function and are also used by the animal to understand the dimensions of the ravines in which it is found.
The hind legs are longer and the long tail is hairless.
The breasts are present only in females in number of five pairs, three pectoral and two inguinal or pelvic.
In the female, the urethra opens in front of the vagina, which opens at the level of the vulva. The anus is separated from the vulva by a small perineum. In the male, the urinary and genital orifices are confused at the tip of the penis, normally hidden in a skin fold, the foreskin. The normally intra-abdominal testicles can descend into the abdominal cavity covered with a skin sac, the scrotum: the anus is at the base of the tail in both sexes.
On the top of the skull are the ears, which have a hairless and membranous pavilion. The sense of hearing in mice is very developed, in fact they can hear frequencies up to 100 kHz and perhaps even higher, thus well beyond the ultrasound threshold.
The verses are: squeaks and squids.

Biology –
The House mouse reaches sexual maturity at about 3 months and is able to reproduce throughout the year. In fact, if the food is available continuously, the female can give birth and become pregnant again almost continuously, with a maximum of fifteen annual deliveries.
The female estrus cycle lasts about 5 days, while the real estrus lasts about twenty hours. When numerous females are forced to live together, however, they tend to never go into estrus, while if they are put in contact with a male’s urine, estrus occurs after three days.
Before mating, the male courts the female by emitting ultrasonic calls on a frequency ranging from 30 to 110 kHz, and persistently following and sniffing her. The male, however, emits such calls also during and after the mating; some individuals may emit such calls even just by smelling female pheromones. Due to their complexity and the fact that the tonality and complexity of these verses vary from individual to individual, these calls have been combined with the melodies of birds.
Even the females are able to issue ultrasonic calls, although they do so more rarely.
Following mating, the female develops a vaginal plug that persists for a day and prevents her from being whipped by other males.
The period of pregnancy lasts approximately three weeks, at the end of which a number of puppies ranging from 3 to 14 are given birth. These are looked after by the mother in solitude, tending to keep the males away to avoid episodes of cannibalism.
At birth the pups are blind and naked and the hair begins to grow at three days of life, while the eyes are opened at two weeks.
Having reached 6 weeks for the females and 8 for the males, they are able to reproduce, even if both the one and the other can begin to mate already starting from the 5 weeks of life.
In general, in the natural state, the life expectancy of mice is less than one year, due to the substantial losses due to predation and the harsh environments in which they live. In safer environments, life expectancy increases dramatically.

Ecological Role –
Mus musculus is a species that is commonly found in almost all countries of the world, often alongside humans, who involuntarily provide it with food and accommodation, but not always in harmony with them, as mice can cause even considerable damage to crops and food pantries, as well as being vectors of a number of diseases, such as leptospirosis.
It is a species that is mostly active after sunset. During the night they keep well away from violent light sources. During the day, the mice rest in burrows placed in sheltered places and lined with various materials, such as cardboard, cloth and grass. The mouse does not hibernate, unlike many other rodents: it adapts very well to cold environments (as long as there is availability of food), to the point that stable populations are found even in cold rooms.
It is a sociable animal with individuals of its own species, it tends to recognize its peers based on the genetic constitution, facilitated by the fact that the genes included in the histocompatibility complex are decisive on the odor emitted by the mouse’s body. So mice with the same smell tend to belong to the same family.
Furthermore, the mouse is able to communicate with its peers both with sounds audible to the human ear (squeaks), generally used for long distance calls, and with ultrasonic calls, used in short distance communication.
Males are territorial and tend to define their own space within which they dominate various females and cubs.
To signal their presence and thus avoid episodes of intolerance, mice rely on olfactory signals, such as mainly the marking of their territory with urine and feces. Especially the urine of males has a strong odor due to the presence of numerous chemical compounds and pheromones.
The mouse moves both with a quick step and with jumps that can reach forty centimeters in length. However, when the animal is busy eating, fighting or orienting itself in an unknown territory, it is not uncommon for it to stand on its hind legs, using its tail to balance itself. The tail is used to keep balance even during jumping and running.
The diet of this rodent is mainly composed of plant parts, insects, mites and even if they prefer more products of plant origin, if necessary they do not disdain meat.
The mouse gets the water it needs for the most part from food: in any case it also needs to drink from time to time. Finally, to supplement his diet, he does not hesitate to practice coprophagia.
Furthermore, contrary to cartoon images and the common idea, mice do not eat cheese except in the case of extreme food shortages.
Mus musculus, according to the IUCN, is included in the list of the 100 most harmful invasive species in the world.
It is in fact an abundant species, widespread in human settlements, industrial areas and cultivated areas (D. Capizzi & M. Santini in Spagnesi & Toso 1999).
This small rodent is a pest species, whose presence in urban and industrial settlements causes significant economic damage and requires control activities, and as such does not present any conservation problems.