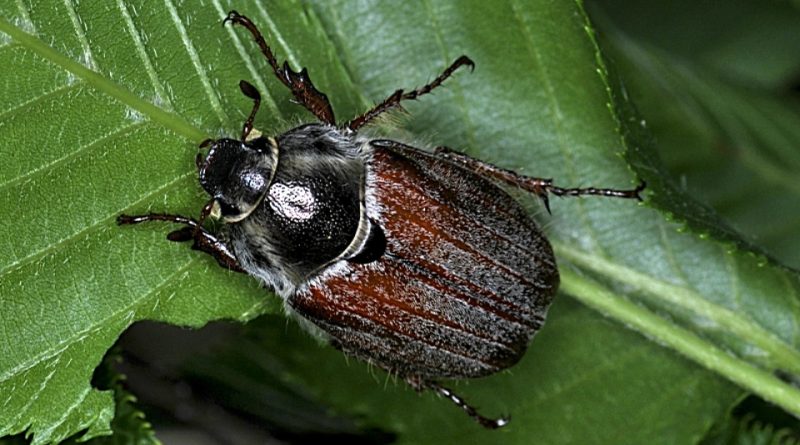 The beetle (Melolontha melolontha Linnaeus, 1758) is a beetle insect belonging to the Scarabaeidae family.

Geographic Distribution and Habitat –
The beetle is an insect that frequents agrarian, forest and ornamental arboreal and shrub plants, and spontaneous herbaceous plants.
Its habitat is that of European woods and parks and gardens.
This beetle, in Italy, is widespread almost everywhere and is extremely polyphagous.
This species, like other insects, is in decline; up to the early 1980s, 20 million specimens could be found in 18 km² of forest, today their number has decreased.

Morphology –
Melolontha melolontha is a beetle which, at the adult stage, is recognized for having a length of 20-30 mm, of elongated shape and with red-brownish elytra and prothorax of a color ranging from brown-blackish to greenish. In the farinosus subspecies the elytra are thickly covered with white scales. The thorax and head are black in color and have a large mouthparts.
The pigidium, which is the terminal part of the abdomen, is triangular in shape, with the apex pointed towards the distal part and curved downwards. The lower part has black and white stripes instead.
It has antennas formed by a funiculus and a fan with a different number of items depending on the sex. In males the funiculus has 3 articles and the fan, very elongated, curved and flattened, 7 articles. In the female the funiculus is composed of 4 articles and the fan, very short and almost globular, of 8 articles.
The larvae are up to 40 mm long, with a C-curved shape, whitish in color and with orange head and legs and the terminal part of the abdomen very swollen and dark in color due to fecal accumulation, eliminated concomitantly to larval moults.

Attitude and Life Cycle –
The Melolontha melolonta is a beetle with a multi-year cycle in which adults, which have a life of 5-7 weeks, flicker in the period of April. These feed on the aerial systems of the plants, especially the forest broad-leaved trees, which they infest starting trophic activity at dusk. After 15 days from the flickering, they mate and the females lay in the ground, at a depth of about 20 cm, about 60-80 eggs, which hatch 4-6 weeks after laying.
The newly born larvae begin their trophic activity on the roots, especially the more tender ones, even of spontaneous herbaceous plants. These reached the end of the first year, with the approach of winter, they deepen into the ground and overwinter. Subsequently in the following spring they resume their activity, spending the whole 2nd year at the larval stage.
The larvae arrived in the spring of the 3rd year can have different behaviors which are:
– resume activity, as in the second year, and then flicker in the spring of the 4th year;
– pupate and flicker in May of the 3rd year.
In this way, this beetle completes its life cycle in 3 or 4 solar years, which are actually 2-3 years.
Following the presence of this insect, plants, if significantly attacked, show decay, poor development, withering during the summer and early fall of the leaves in spring. In the case of severe infestations, plants can die. The presence of considerable infestations of this beetle can manifest itself with failures in arable land and decay, especially in the years following those of the appearance of adults.

Ecological Role –
The Melolontha melolonta, in case of massive infestations, causes damage both by adults and by larvae:
– from adults who feed from leaves and can cause strong defections to affected plants in the case of severe infestations;
– from larvae feed on the roots and are particularly harmful to nurseries or herbaceous crops, especially if vegetables.
Among the major risk facts that can most expose this beetle to attack, we remember:
– Orchards in areas known to be subject to attacks;
– Light and sandy soils;
– High temperatures during the flight of the insect;
– No wind during the flight.
To reduce the infestations of this beetle, some agronomic measures can be adopted:
– It is possible to place nets on the ground that prevent the deposition of eggs in the ground and consequently the massive presence of larvae. These nets must be placed before the flight begins and should remain in the orchards until the end of the return flight;
– If anti-hail nets are present, they should be deployed before the start of the flight. It is important to close the lateral parts as well. This is sufficient to avoid damage from rosura during the maturation period and limit oviposition. Attention must be paid to the possibility that consistent ice formation during cold nights will damage anti-hail nets;
– milling of the transit lanes for the hatching of the larvae during the flight year (end or June / beginning of July) can considerably reduce the degree of attack (up to 80%).
Finally, it should be remembered that among the very active predators of Melolontha melolonta there are moles for which, in soil where weeding has previously been carried out, the limitation of the populations of moles benefits the beetle.