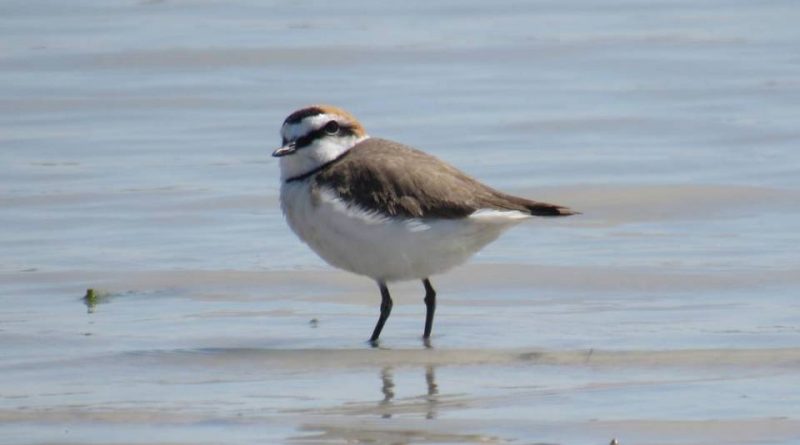 The Kentish plover(Charadrius alexandrinus, Linnaeus 1758) is a bird belonging to the family of the Charadriidae.

Geographic Distribution and Habitat –
The Kentish plover is a cosmopolitan bird with very wide geographic distribution and habitat.
We find it in Europe, the Americas, Asia and Africa. In Europe, populations are typically found in the west; although there was once a breeding population in Hungary.
In Africa, the populations are on the southern coast of Senegal and along the northern coast of the Mediterranean and the Red Sea. The breeding area continues along the Arabian Peninsula, Saudi Arabia, Qatar and Bahrain in the Middle East. Small populations can also be found on islands, such as the Cape Verde archipelago, the Canary Islands and the Azores. It is a rarer bird in Australia. Moreover, some populations do not migrate, such as the Cape Verde population, however other populations may migrate at reasonable distances; it is known that these birds spend the winter in North Africa and migrate to Turkey and Greece in the spring. Some birds that breed in Western Europe do not cover long distances, and still migrate mainly to West Africa.
In Europe, the distribution is mainly coastal and some inland relict populations are found in Spain, Austria and Hungary.
In Italy, despite the halving of the population in recent decades, it nests on the coasts of the Adriatic and the middle Tyrrhenian.
Recently, in June 2020 it was spotted in south-western Sicily and precisely in Capogranitola, in the municipality of Campobello di Mazara (TP).
Its habitat, as mentioned, is very varied: it ranges from desert areas, with soil temperatures that reach 50 ° C to the tundra but mostly we find it in the coastal areas. This bird does not need shelter in wooded or grassy areas and is able to nest in the dunes of the beach. 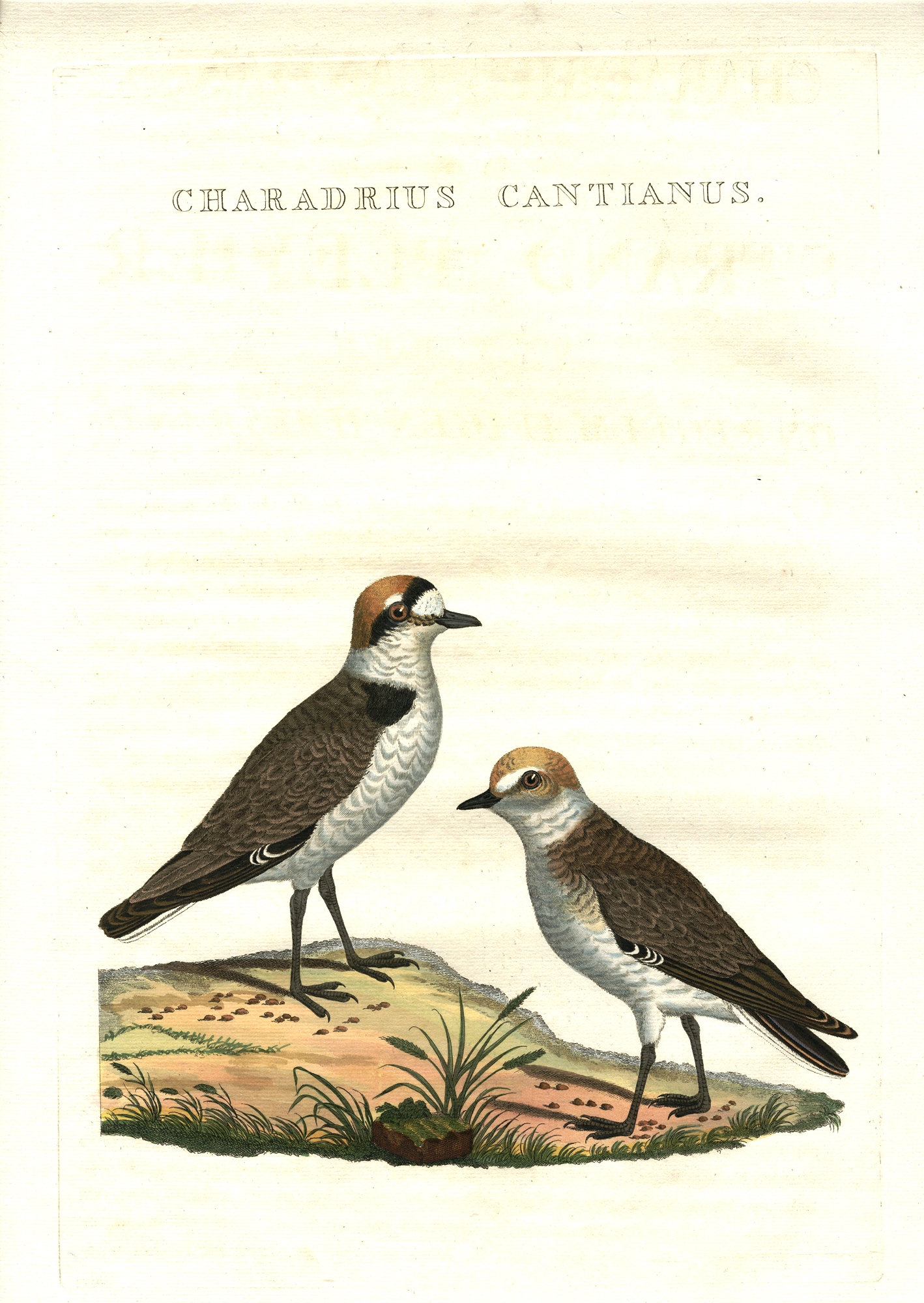 Description –
The Charadrius alexandrinus is a bird with dimensions of 16-18 cm in length with a wingspan that on average ranges from 33 to 40 cm.
The male in bridal dress has predominantly gray-brown color upper parts, while on the nape the color tends to tawny red. A wide white eyebrow extends from the forehead to the ears, while a black streak starts from the base of the beak, crosses the eye and also extends to the ears.
The lower parts are white, and there is a thin blackish pectoral band interrupted in front. The legs are grayish-blackish.
The female in wedding dress resembles the male but the black of the plumage is replaced by a more or less dark brown, the eyebrow is less evident, especially behind the eye, and the color of the legs tends to brown.
In the winter livery, the adults resemble the females in wedding dress, even if the males show the reddish nape as early as January.
Juveniles resemble females, but have more nuanced shades. In all clothes, the beak is black.
This bird has an alarm call, which is often heard both on the ground and in the air and can occur alone or in pairs as a too-eet. The threat cry has a metallic sound, like dwee-dwee. ”

Biology –
The Kentish plover has a particularly flexible system of reproduction which, within populations, includes both monogamous and polygamous behaviors.
Breeding pairs are known to mate with each other again the following year, however mating changes have also been observed during the breeding season.
The reproduction model is however even more complex with variations that are probably justified by the need of the species to avoid consanguinity or to improve the genetic heritage of the descendants.
Furthermore, the reproductive couples can mate again in case of failure of the previous ones, with the same or a different mate, and both males and females can generate more than one brood.
Courtship is also quite varied; in particular among the socially monogamous and polygamous populations; for example, in polygamous populations, the time spent courting is significantly higher for both males and females than in monogamous populations. Manifestations of courtship include active gestures such as running on the flat, making small shallow cavities in the ground which are subsequently used to build nests, and struggling or running to defend a breeding territory (mainly by males).
The breeding site is close to waters on dry or sandy muddy ground and with scarce vegetal cover, where the male digs several holes; the female chooses one, which is then covered with small pebbles and shell fragments. The species nests in April-May, depending on the latitudes, creating small depressions on the sand where it lays from 1 to 4 eggs and can, in case of failure, try a second nesting between May and July.
Already after 4-12 hours the young follow the couple in search of food.
Both parents incubate the eggs, however they are not both looking after the young once the eggs have hatched. Brood abandonment is the cessation of care, by one or both parents, before the offspring are able to survive independently usually occurs after a week in which the brood is followed by both parents .
Brood abandonment has been observed in both males and females, however females abandon brood significantly more frequently than males.
Most likely this is related to the ability to mate again and reproduce.
The non-abandoning parent can continue to hatch their chicks up to 80% of the time for more than 20 days after hatching, as precocious young are vulnerable and exposed to outside temperatures.

Ecological Role –
The Kentish plover is a species that (outside the breeding season) can live alone or in loose flocks of 20-30 individuals and occasionally can incorporate into larger flocks of up to 260 individuals of multiple species.
Their main food source is small aquatic and terrestrial invertebrates, such as insects and their larvae (eg beetles, grasshoppers or flies), molluscs, crustaceans, spiders and sea worms. They often feed on the shore of lakes, lagoons or ponds in areas of moist soil rich in invertebrates. They feed by watching, stopping or running and then pecking to catch prey, but they also probe the sand for prey, or catch flies by keeping their mouths open. This bird’s ability to identify prey is affected by light, wind, and rain. At night, their ability to hunt may be limited, but they have been shown to have good night vision due to their large eyes and increased visual sensitivity of the retina.
The Charadrius alexandrinus, though decreasing, is not yet reported by the IUCN as an endangered species.
However, being a species linked exclusively to coastal sites, it is affected by all forms of environmental degradation, such as coastal urbanization, the erosion of sandy coasts and the disturbance caused by tourist and recreational activities.
Indeed, the size of the global population is continuously declining, although for some populations the trends are unknown. It is estimated that the European population estimated at 21,500 to 34,800 pairs, making up about 15% of the global range, will decline by less than 25% in 15 years / three generations.
As far as conservation measures are concerned, this species is listed in Annex I of the Birds Directive (79/409 / EEC).