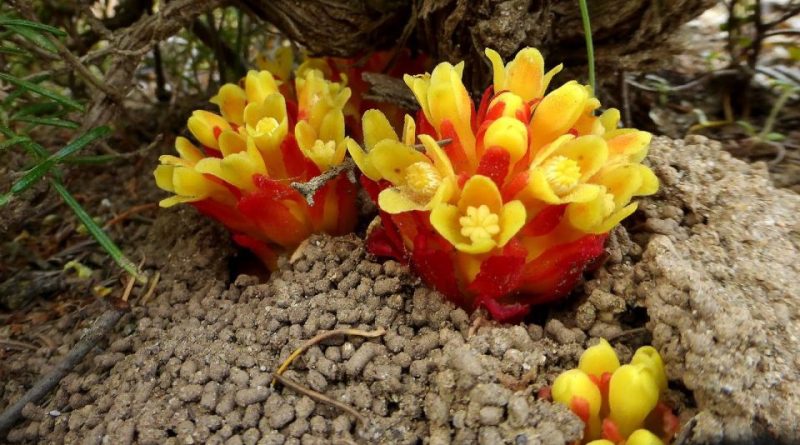 Etymology –
The term Cytinus comes from the Greek κῠτῐνος cytinos citino or chalice of the pomegranate flower, in Theophrastus and Hippocrates: for the appearance of the flowers that sprout directly from the ground.
The specific epithet hypocistis comes from the Greek ὑπὸ hypó below and from Cistus (from the Greek κίστη kíste box, in Dioscorides: it describes the characteristic of the ripe fruit, a capsule which, when opened, expels the seeds) cistus, the parasitic plant: which is under the cysts.

Geographic Distribution and Habitat –
Cytinus hypocistis is a plant widespread throughout the Mediterranean region and in Macaronesia; we find it in Albania, Algeria, Crete, Croatia, Cyprus, Greece, France (including Corsica), Israel, Italy (including Sardinia and Sicily), Lebanon, Libya, Malta, Morocco, Portugal, Spain (including the Balearic and Canary Islands ), Syria, Tunisia and Turkey.
The subspecies Cytinus h. macranthus is native to Portugal and western Spain; the subspecies Cytinus h. orientalis is native to southern Greece and Crete; and the subspecies Cytinus h. pityusensis is endemic to Ibiza of the Balearic Islands.
In Italy it is widespread above all in the center-south, but it has also been reported in Lombardy and Veneto.
Its ideal habitat is represented by scrub and garrigue environments, especially on siliceous soils, from 0 to 800 m s.l.m., where it grows on the roots of cystaceans. 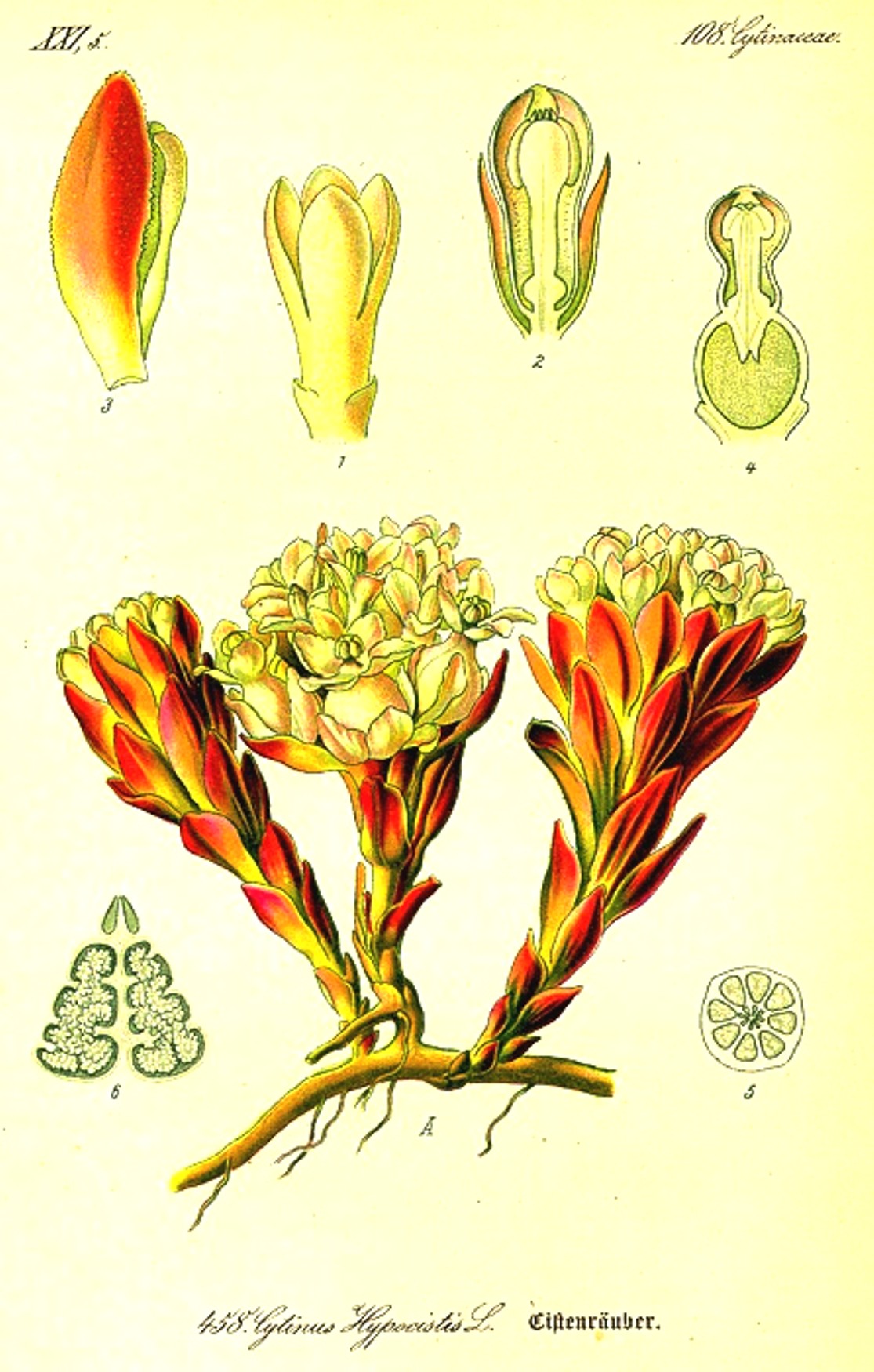 Description –
The common Hypocystus is a small perennial plant, a parasite of Cistaceae, on which it grows at the expense of their roots.
The plant does not exceed 8 cm in height.
The stem is short and covered with fleshy scales.
The leaves are also fleshy, 5 x 10-15 mm, alternate, scaly and without stipules, widely oblanceolate, keeled, irregularly denticulated-ciliated (fimbriate) and thickly imbriciate to give the plant a club-like appearance. The hypogeal leaves are whitish, the epigean ones yellowish or reddish, scarlet red at the apex.
The flowers are grouped on a capituliform spike, with the female ones placed below and the male ones above; they have a regular shape and have a yellow perianth with four teeth.
The male flowers of 12-15 (17) mm, internal, with funnel-shaped perigonium, abruptly narrowed under the lobes, with 8-10 stamens welded on a central column; the female ones of 12-15 mm, external, with lageniform perigonium (in the form of a bottle or flask), papillose.
The flowering period is from April to May.
The fruit is yellow in color and is a kind of berry whose coating derives from the perianth (acrosarch). The seeds are immersed in a viscous pulp.
Pollination is myrmecocora.

Cultivation –
Cytinus hypocistis is a species that grows in the natural state, without chlorophyll, parasitizing plants of the genus Cistus.
It especially prefers siliceous soils and we find it above all in vegetation typical of the Mediterranean scrub and garrigue where it is harvested in the wild for local use for food or medicine.

Customs and Traditions –
Cytinus hypocistis has been used in traditional medicine to treat dysentery and throat cancers, and has been used for its astringent qualities.
It is used for food but especially for medicinal use.
Both methanol and whole plant water extracts have been shown to be active against Plasmodium falciparum strains (a parasitic protozoan that can cause malaria). The antimalarial activity of these extracts could be mainly attributed to the presence of several hydrolyzable tannins, a group of compounds previously reported as having antimalarial activity.
In addition, a decoction of the plant has been used in the treatment of dysentery.

Preparation Method –
The common Hypocystus is a plant that is harvested in the wild and, above all, young plants are cooked and used to replace asparagus.
For medicinal use, decoctions or tinctures are prepared.