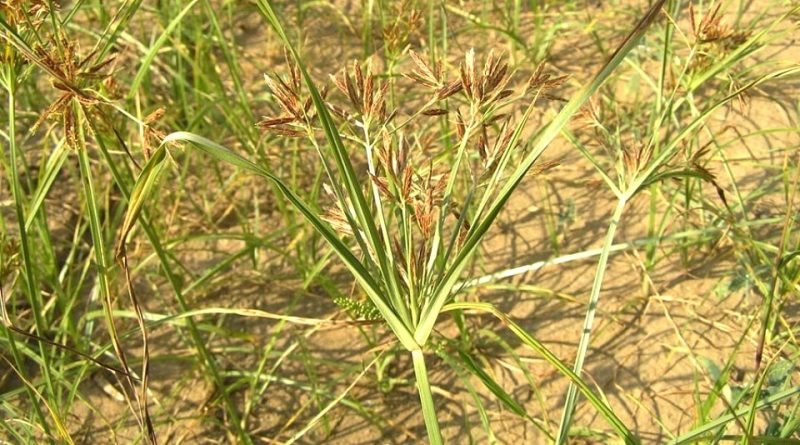 The Coco-grass (Cyperus rotundus L.) is a herbaceous species belonging to the Cyperaceae family.

Etymology –
The term Cyperus comes from the Greek κύπειρος cýpeiros rush with edges, cipero, papyrus.
The specific epithet rotundus comes from the Latin “rotundus” = round, due to the shape of the more or less subovoid tubers.

Geographic Distribution and Habitat –
The Coco-grass is a plant widespread in the warm temperate zones to the tropical zones of southern Europe, Africa, Asia, Australia, the Pacific and the Americas, but with important gaps: a continent, a climatic zone, etc.
In Italy it is present in all regions of Italy except in Piedmont, Valle d’Aosta, Trentino-Alto Adige and Emilia-Romagna.
Its habitat is often as a weed in irrigated crops, but it is also frequent in uncultivated fields, in vineyards, on the margins of crops, near canals along the roads, from sea level to about 800 m. 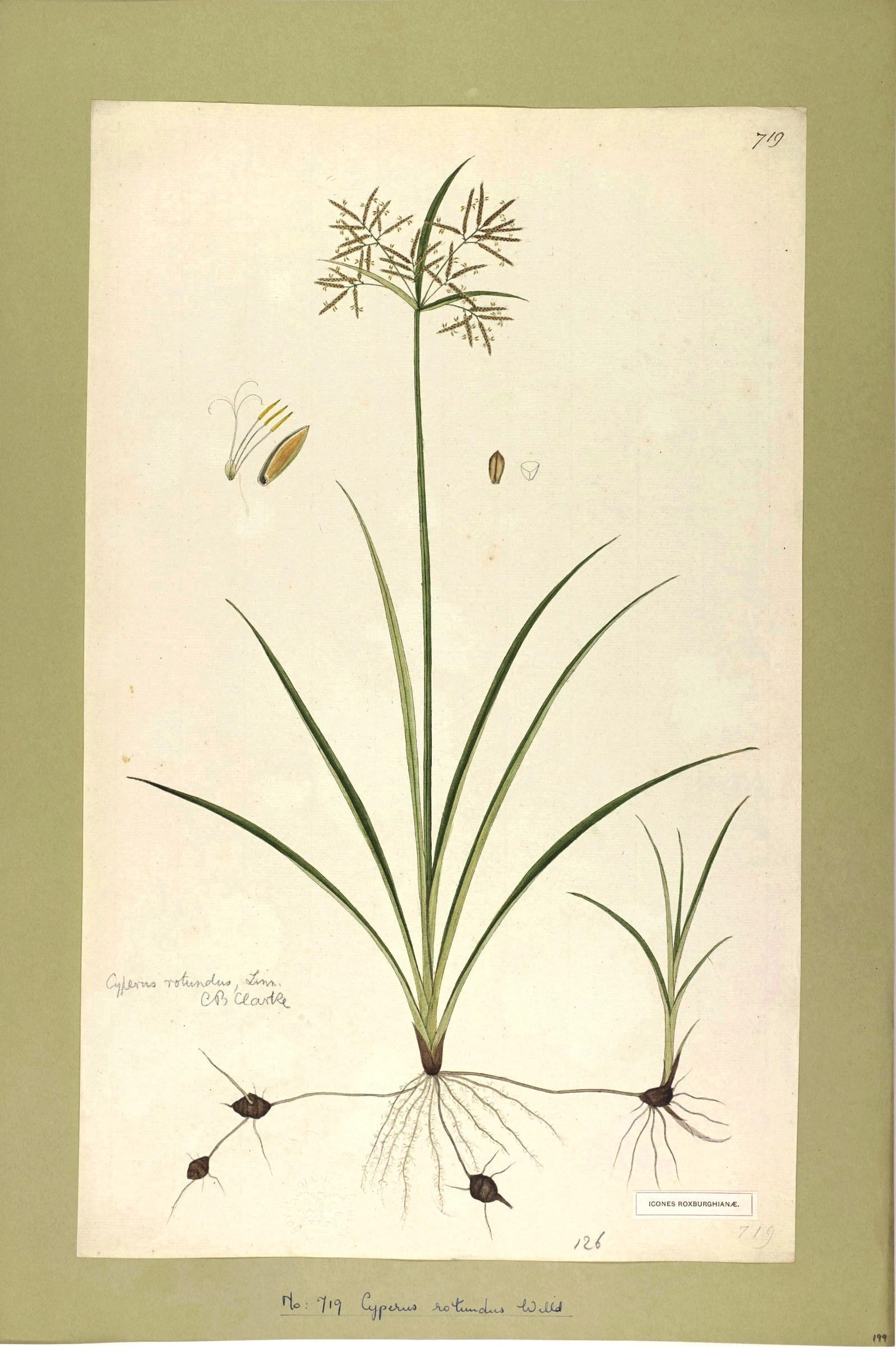 Description –
Cyperus rotundus is a herbaceous plant, perennial, 10-40 cm tall.
It has a creeping, filiform and tenacious, dark horizontal rhizome, terminated by small tubers.
The stem is erect, of delicate consistency, sharply trine, naked.
The leaves are all basal, with often reddened sheath and 2-6 mm wide, glaucescent lamina.
The inflorescence has an umbrella-shaped shape with 1-4 cm branches and 2 (4) leaf bracts up to 5 cm long.
The antesis is from June to November.
The ears are distichous on opposite sides of a common axis, brownish-red, linear or sickle-shaped (1.5 X 12-16 mm). Stigmas 3. Achene trine-fusiform.
For the determination of the genus Cyperus it is very important to know the number of stigmas, which can be appreciated quite well with plants just picked in the open field or in the laboratory with a good lens.
It is a species similar to Cyperus esculentus L. which is distinguished by the light green leaves 5-10 mm wide and the 6-12 mm straw-yellow or reddish spikes.

Cultivation –
The Zigolo weed is a plant characteristic of the warm temperate zone of the tropics, where it is found at altitudes up to 800 meters. It grows best in areas where annual daytime temperatures are between 24 and 32 ° C, but can tolerate 10 – 45 ° C, and also does not tolerate temperatures of -5 ° C or lower.
It prefers an average annual rainfall between 500 and 3,000 mm, but tolerates 300 – 4,200 mm.
The plant prefers moist sandy loam and a sunny location, with soil pH between 5.5 and 7, tolerating 3.5 – 8.
This plant is sometimes grown for its edible tubers in tropical regions, however it behaves like a serious pest of agricultural land in the tropics where it spreads rapidly and, for this reason too, is considered one of the most harmful herbs in the world.
The difficulty of controlling it is the result of the intensive presence of its underground tubers and its resistance to most herbicides. It is also one of the few plants that cannot be stopped with plastic mulch.
It is subject to legal control in several countries.

Customs and Traditions –
Cyperus rotundus, especially once, was part of a series of starchy tuberous sedges that may have been used as food by Pliocene hominids. Biomarkers and microscopic evidence of C. rotundus are present in human dental calculus found at the Al Khiday archaeological complex in central Sudan dating back to before 6700 BC and the pre-Islamic Meroitic kingdom of 300-400 AD. It is suggested that the consumption of C. rotundus may have contributed to the relatively low frequency of dental caries among the Al Khiday Meroitic population due to its ability to inhibit Streptococcus mutans.
C. rotundus was also used in ancient Egypt, Mycenaean Greece and elsewhere as an aromatic and to purify water. It was used by the ancient Greek physicians Theophrastus, Pliny the Elder and Dioscorides both as a medicine and as a perfume.
This plant has uses both as a medicinal and food species.
In the medical field, Cyperus rotundus has many beneficial uses, it is also a basic carbohydrate source in tropical regions for recent hunter-gatherers and is a famine food in some agricultural cultures.
In traditional Chinese medicine, this plant is considered the main herb that regulates qi.
The plant is mentioned in the ancient Indian Ayurvedic medicine Charaka Samhita (about 100 AD). Modern Ayurvedic medicine uses the plant, known as musta or musta moola churna, for fevers, digestive system disorders, dysmenorrhea, and other diseases.
In general, the roots and tubers are analgesic, antibacterial, antispasmodic, antitussive, aromatic, astringent, carminative, diaphoretic, diuretic, emmenagogic, litholytic, sedative, cutaneous, stimulant, stomach, tonic and deworming agent. They are used internally in the treatment of digestive problems and menstrual disorders and are commonly combined with black pepper (Piper nigrum) in the treatment of stomach pains.
It is also a pungent bittersweet herb that relieves spasms and pain, acting primarily on the digestive system and uterus, and the plant is used in the treatment of cervical cancer.
From the tubers an essential oil is obtained which has antibiotic activity and has been shown to arrest the growth of Micrococcus pyrogenesis.
The Eastern Arabs traditionally use roasted tubers, while still hot, or hot ashes of burnt tubers, for wounds, bruises and carbuncles. Western and Islamic herbalists including Dioscorides, Galen, Serapion, Paulus Aegineta, Avicenna, Rhazes, and Charles Alston have described its use as useful for intestinal, emmenagogue and depleting problems and in emollient patches.
Several chemicals have been identified in this plant:
– cadalene, cyprotene, flavonoids, sesquiterpenes, terpenoids, mustakone, isociperol, aciperone, rotundene, valecine, kaempferol, luteolin, quercetin, patchoulenone, isopatchoulenone, sugeonyl acetate, cellulose triacetate and sugebiol. A sesquiterpene, rotundone, so called because it was originally extracted from the tuber of this plant, is responsible for the spicy aroma of black pepper and the peppery taste of some Australian Shiraz wines.
The extract of Cyperus rotundus leaves and tubers increases the accidental engraftment of several species. These extracts contain a large amount of auxins and phenolic compounds that favor the rooting of cuttings and seedlings.
Despite the bitter taste of the tubers, they are edible and have nutritional value. The plant has a high amount of carbohydrates and, in addition to prehistoric uses, is currently eaten in Africa in areas affected by famine.
In addition, tubers are an important nutrient source of minerals and trace elements for migratory birds such as cranes.
As for food uses, the roots are harvested in summer or winter and dried for later use.
Among other uses, it should be remembered that the leaves are used in wicker and to weave hats, mats, etc. The aromatic roots are used in India for perfumery.
Furthermore, the tubers once dried and ground into a fine powder, are used as talcum powder.
The tuber is also used as an insect repellent and to perfume clothes in the closet.
Well dried grass is used in sleeping mats.

Preparation Method –
The bitter-tasting tubers of Cyperus rotundus are edible when cooked while the dried roots can be ground into powder and used as cereals.
They have a very strong flavor when freshly picked; the tubers become milder in taste if they are left to dry out.
Even the seeds, in case of famine, are used when all else fails.