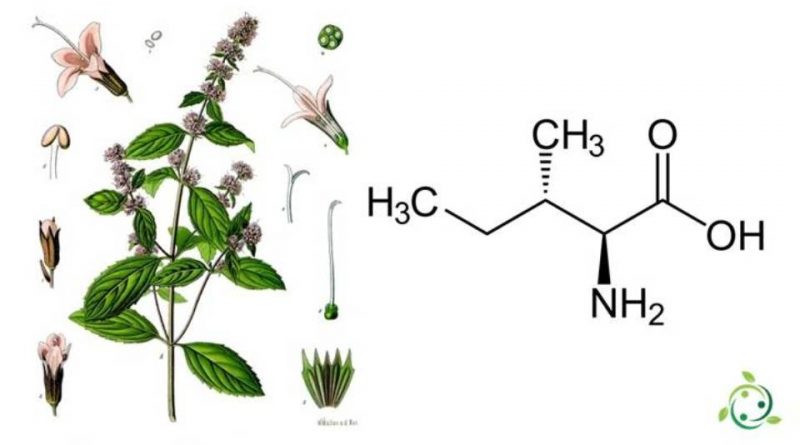 Isoleucine, whose term in the official IUPAC nomenclature is L-isoleucine (also known by the abbreviation Ile or I), or (2S, 3S) -2-amino-3-methylpentanoic acid, is an α-amino acid.
Isoleucine was discovered in 1903 by the German chemist Felix Ehrlich, who identified it in beet molasses.
The synthetic isoleucine was instead reported for the first time in 1905 by the French chemist Louis Bouveault.
Isoleucine has a brute or molecular formula: C6H13NO2 with a chiral molecule that contains an α-amino group, a carboxyl group and an aliphatic side chain, a sec-butyl, classified as non-polar and uncharged (at physiological pH).
The L-enantiomer is one of 20 ordinary amino acids and refers to the acid stereoisomer- (2S, 3S) -2-amino-3-methylpentanoic – this is the natural configuration.
From a biochemical point of view, isolucine is part, together with threonine, of the restricted family of natural α-amino acids containing two stereogenic centers. There are four possible stereoisomers and they have absolute configuration respectively: (2S, 3S), (2R, 3R), (2S, 3R) and (2R, 3S).
When we talk about L-threonine we refer to the stereoisomer (2S, 3R), the most represented in nature.
Isoleucine is an essential amino acid for humans as the body cannot synthesize it and must therefore be taken with the diet.
Isoleucine, on the other hand, is synthesized in other organisms, such as bacteria, starting from pyruvate using biosynthetic leucine enzymes. In genetic transcription it is encoded in the ATT, ATC, ATA codons.
Being an essential nutrient, not synthesized by the human body, isoleucine must be taken with the diet, usually as a component of protein.

In plants and microorganisms it is synthesized in various steps, starting from pyruvic acid and alpha-ketoglutarate.
The nutritional sources of this amino acid, although not synthesized by animals, are mainly those of foods of animal origin. Foods with the highest isoleucine content are: eggs, soy protein, seaweed, turkey, chicken, lamb, cheese and fish. However, isoleucine is also present in some plants such as shallots (Allium ascalonicum L.), peppermint (Mentha × piperita) and others.
The daily requirement, which is recommended by the World Health Organization for this essential amino acid, is 20 mg / kg of body weight. For example, the recommended value for a 70 kg individual is 1400 mg.
From a biochemical point of view, isoleucine is both a glucogenic and a ketogenic amino acid.
After transamination with alpha-ketoglutarate, the aliphatic side chain can be converted either into succinyl-coenzyme A, and inserted into the citric acid cycle for oxidation, or converted into oxaloacetic acid for gluconeogenesis (therefore glucogenic).
Isoleucine can also be converted into acetyl-coenzyme A and inserted into the citric acid cycle by condensation with oxaloacetic acid to form citrate.
In mammals, however, acetyl-coenzyme A cannot be converted back to carbohydrate but can be used in the synthesis of ketone bodies or fatty acids, which is why isoleucine is a ketogenic amino acid.
The inability to metabolize isoleucine, together with other amino acids, is associated with MSUD disease which consists in the discoloration of the patient’s urine and in the characteristic odor of these, from which the name of the disease derives and which, in severe cases it can lead to nerve cell damage and death.