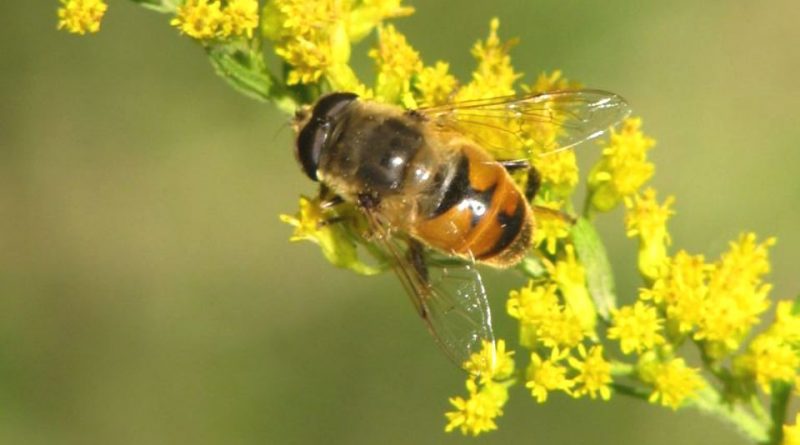 The drone fly (Eristalis tenax, Linnaeus, 1758) is a diptero belonging to the Syrphidae family.

Geographic Distribution and Habitat –
The drone fly is a common, migratory and cosmopolitan species. It is present all over the world, up to the northernmost latitudes, except in Antarctica. It was introduced in North America where it is widespread.
On the other hand, it is not very present in extremely southern latitudes, nor is it common in the arid areas of Europe, Asia and Africa.
Its habitats are the most varied, from gardens to fields to the most natural areas.

Morphology –
Eristalis tenax is an insect that looks like a large bee but with a more squat shape.
This is a clear example of Batesian mimicry.
The adult insect is about 2.5 cm long. it differs from a bee in the lack of narrowing between the abdomen and thorax. Also, being a fly, it only has two wings while bees have four. It has short brownish-yellow hairs on the thorax and on the first segment of the abdomen. The adult body is dark brown to black in color, with yellow-orange markings on the side of the second section of the abdomen. It also has a yellow-orange band that crosses the 3rd abdominal segment.
The insect also has a marked sexual dimorphism and morphological variability: males tend to have clearer patterns than females. Males can also be easily distinguished from females by their large eyes that almost touch each other, while females have smaller eyes that are more widely spaced.
The eyes are marbled in black.
The average length of the wings is 9.75-13 mm and their average wingspan is 15 mm.
The morphological aspect can vary considerably. The abdomen can vary in color from dark brown to orange. Pigmentation plays an important role in controlling body temperature; the black areas in the center of this insect’s abdomen can absorb solar radiation and thus heat the dorsal blood vessel, which is located just below.
The eggs are white, elongated in shape, and covered with a sticky substance.
The larva is aquatic. It has a cylindrical shape with patches of horizontal folds that divide the body into segments. Two rows of flexible hairs are visible in each of the segments. All larvae have a siphon at the rear end that acts as a respiratory mechanism and resembles a tail. The siphon can be many times the length of the larva’s body.
The pupa stage is very similar to the larva stage but is shorter and thicker; Furthermore, unlike the larval stage, the pupae have two pairs of horn-like protuberances on the thorax. The siphon is still present, but it is locked in the curved position at the back.

Attitude and Life Cycle –
The males of E. tenax, in the summer period, can be strongly territorial, populating territories such as flower beds or bushes to ensure the possibility of mating. Males hover motionless in the air and run after intruders to drive them out of territory. These live in the same territory all their life, where they mate, feed and defend themselves from other insects.
Mating can take place while a pair of E. tenax is in flight, with the male aloft, or on the ground while the female is resting on the foliage. After mating, the adult female lays clusters of about 10 eggs near areas where there is dirty, contaminated water, sewage or decaying organic matter.
When it is far from its “territory of origin”, the males rarely fly, but when it is on the mating site, it becomes very territorial, attacking alien species such as bees, wasps and butterflies.
When the weather conditions do not allow them to leave their territory, they become increasingly aggressive.
The E. tenax larva is scavenger and lives in drains, puddles around piles of manure, sewage and similar places where water is polluted with organic matter. The larvae probably feed on the abundant quantities of bacteria that live in these places.
When fully grown, these settle in drier habitats and look for a suitable place to pupate. In doing so, they sometimes enter buildings, especially barns and basements of farmhouses.
The adult fly that emerges from the pupa is harmless and probably its bee-like appearance allows it to have some protection from other insects or animals.
Like other flying insects, they are common visitors to flowers, especially in late summer and fall, and can play a significant pollinator role. They often feed on the flowers of carrot and fennel.
Females feed on pollen after they pupate and are thus able to obtain the nutrients they need to complete reproduction.
In rare conditions, cases of human intestinal myiasis due to the larva of this insect have been documented.
This occurs when the larvae accidentally penetrate a food which is then ingested. myiasis can be of four types: intestinal or gastric, nasal, auricular or anal.
Clinically, symptoms are variable, including asymptomatic cases, but symptoms are usually abdominal pain, nausea, and vomiting. The fact that the larvae are able to survive gastric acids could perhaps be due to the characteristic that they have adapted to live in polluted environments.
As far as the biological cycle is concerned, the eggs are normally deposited on surface waters, from which the larvae emerge, passing through three distinct stages. Just before pupating, the larvae leave their aquatic environment.
Even if the larvae are aquatic, a lot of organic substance must be dispersed in the liquid medium for the larva to complete its development. The siphon on the back of the larvae remains on the surface of the water as the larva moves through the water. This allows the larva to search for food without having to go to the surface to breathe.
The pupa phase, on the other hand, takes place in a drier place than where the larvae develop. It usually occurs below the soil surface, where eight to 10 days remain.

Ecological Role –
Eristalis tenax has a diet that consists mainly of nectar and flower pollen.
This dipteran belongs to an important but often overlooked group of pollinators. It plays a significant role in the pollination of agricultural biodiversity and natural biodiversity.
Hoverflies are considered less specialized pollinators than bees and are more effective in open flowers than tubular ones.
Eristalis tenax are active during most of the year, from March to December, and are sometimes more numerous than honey bees, especially during autumn in urban areas. Males and females occur in more or less equal numbers in summer and autumn, but males are very rare in spring, when the fertilized females come out of hibernation.