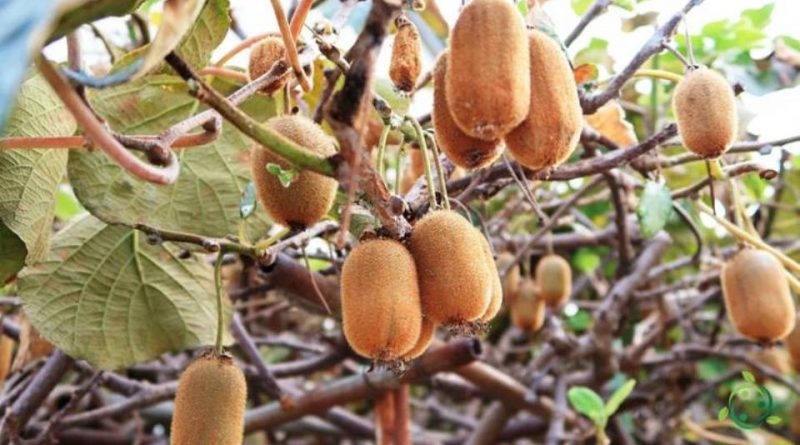 Actinidia chinensis (Actinidia deliciosa (A. Chev.) C.F. Liang & A.R. Ferguson), commonly called kiwi, is a dioecious fruit plant native to China.
Kiwi, being a dioecious plant, should be cultivated by inserting one male for every 6-8 females.
Since the pollination is entomophilous (to a lesser extent also anemophilous), even if the flowers are not very attractive to bees, it is advisable to increase the number of hives.
Furthermore, actinidia fears damage from cold and water stagnation so drainage is essential.
The CVs used are mainly: Hayward, Abbot, Allison, Bruno, Katuscia, Top star, Tumuri, Matua, Autari, M3.
Pruning period –
The pruning of the kiwi must be done in the correct way in order to obtain a better size and quality of its fruits; for this topic, see the specific sheet.
In this contribution we see when the kiwi plant is pruned and how often the branches must be cut, remembering that we are in the presence, as mentioned, of male and female plants.
The right time to prune the kiwi is around the month of February; obviously evaluating the climatic variability, the period is that of the end of winter and before the arrival of spring.
This is the best period as it is possible to intervene promptly on the branches that have already produced fruit, which must be eliminated, or those that are damaged by frosts and winter disturbances.

Although there are those who argue that kiwis should be pruned in parallel with the vines and that they should be pruned in the same period, this is partly true as technically the life cycle of a kiwi branch is slightly longer and, therefore, it can bear the weight of the gems more.
A second pruning can then be performed in the month of May; this is because, following the first pruning in February, many buds will be generated and for this the period of late spring is the best time to eliminate all that is in excess to concentrate the kiwi plant towards a more balanced growth, productive and with a better size of its fruits.
Furthermore, the pruning of male and female plants also differ according to the right time to prune the branches: it would be preferable to prune the male plants in late spring, after flowering, while the female ones at the end of winter, before flowering. .
It should also be remembered that according to the lunar calendar, pruning operations are carried out during the waning moon phase.
If you have done well with the pruning periods, the harvest takes place in late October and early November. In this case the fruits will have an optimal size and organoleptic value.
The indices used to evaluate the ripeness are: the sugar content, equal to 7.5 ° Brix, or the content of soluble solids, at 12.5%. Kiwi is one of the fruits with the highest vitamin C content and is used in fresh consumption and in the confectionery industry.