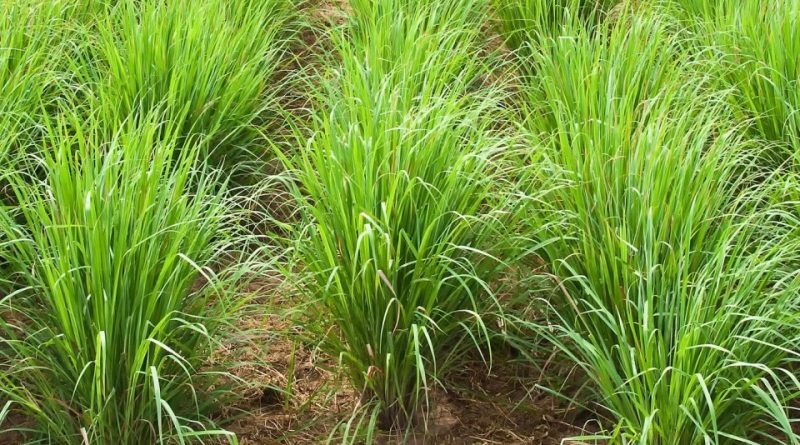 Etymology –
The term Cymbopogon comes from the Greek κύμβη cýmbe cup, cup, boat and πώγων pógon barba: reference to the arrangement of the hairy-looking cobs.
The specific epithet citratus comes from Citrus (Latin name for cedar and lemon, from the Greek Greek κέδρος kédros cedar and κίτρον kítron lemon), therefore with a citrus scent.

Geographic Distribution and Habitat –
West Indian lemon grass is a tropical plant, not known in nature, but probably native to Sri Lanka or Malaysia. It has been widely introduced in South Asia since pre-colonial times. After World War I, lemongrass was introduced in Madagascar, South America and Central America. Now, this species has naturalized in all tropical and subtropical areas.
Its natural habitat is not known as the plant is not found in its natural state. 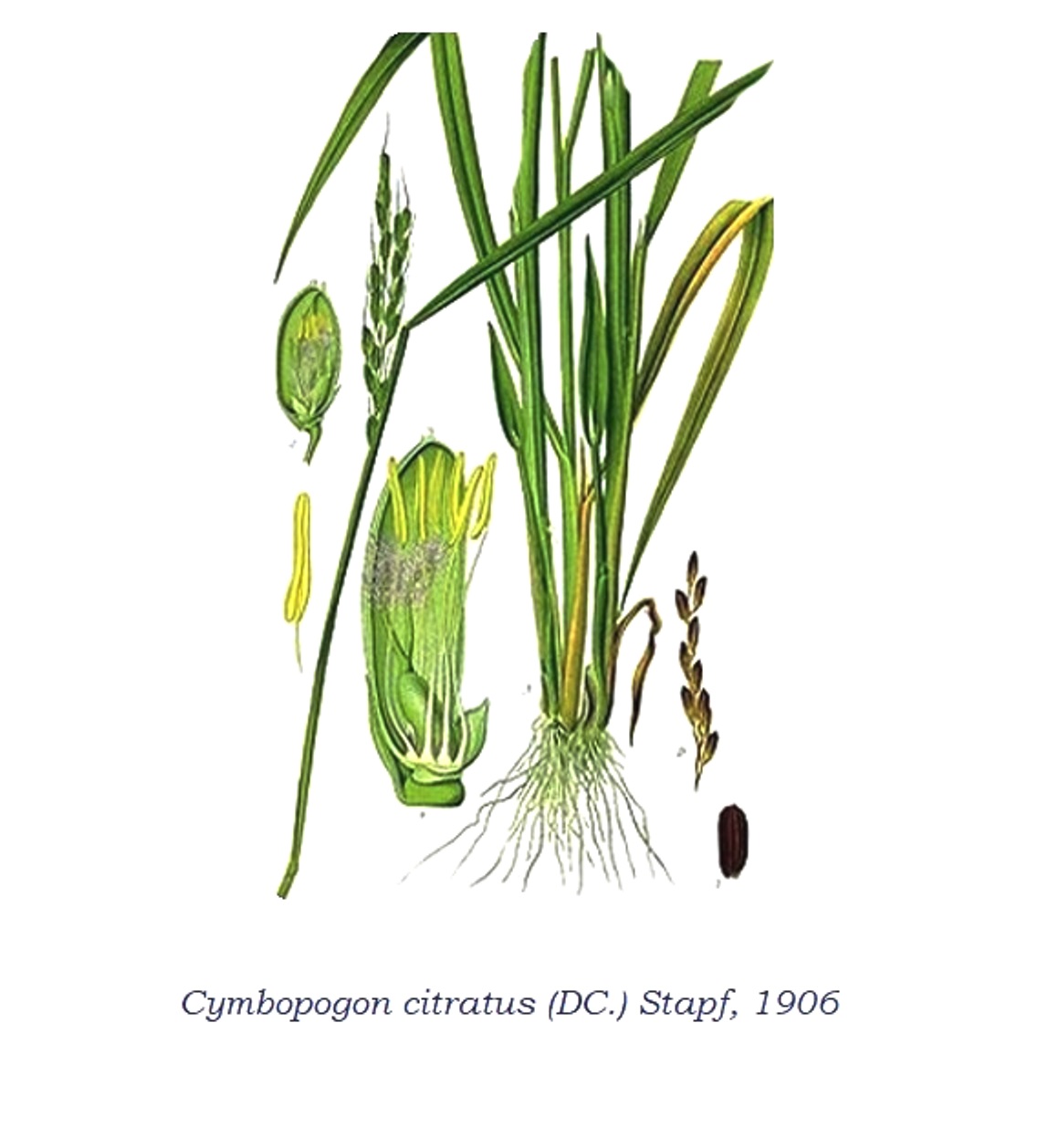 Description –
Cymbopogon citratus is an aromatic, perennial, evergreen herbaceous plant.
This plant forms tufts, with numerous rigid stems, deriving from a short rhizomatous rootstock and growing around 1.5 meters.
It is composed of simple, bluish-green leaves, with entire margins and linear in shape. The leaf blades tend to be 45-90 cm long and the parallel veins are also evident.
The plant rarely blooms.

Cultivation –
Cymbopogon citratus is a plant widely grown in subtropical and tropical areas, both on a commercial scale and in gardens, especially in Southeast Asia. it is found at altitudes of up to 1,400 meters, although it grows best below 500 meters.
It grows best in areas where annual daytime temperatures are in the range of 24 – 30 ° C, but can tolerate 18 – 34 ° C. It also can’t stand temperatures of 10 ° C or lower.
It prefers an average annual rainfall between 1,500 and 3,000 mm, but tolerates 700 – 4,200 mm.
From the pedological point of view, it prefers a soil that retains moisture in full sun, with well-drained soils; in fact commercial plantations often prefer sandy soils, although good growth has also been observed in Australia on clayey soil with pH 9.6 and in Sarawak on acid peat soil. In general, however, it prefers a pH between 5 and 5.8, tolerating between 4.3 and 7.3.
Propagation can take place by seed even if little of this is produced.
Only young and expanding leaves synthesize and accumulate essential oil.
Harvesting begins between 120 and 240 days and the plant is subsequently harvested every 90-120 days. The plant has an economic life of 4 – 6 years.
The average annual yield of foliage is 30-50 tons (and even more) per hectare, with a yield of 75-250 kg of lemongrass oil (0.25 – 0.50%).
Harvesting the tops yields an oil yield of 0.6%, while the bottoms yield only 0.15%.
Fresh grass produces 0.2 – 0.4% oil, with an average yield of 50-120 kg of oil / Ha per year. Foliage yield is greatest on heavy fertile soils, but under these conditions the oil usually has a lower citral content.

Customs and Traditions –
Cymbopogon citratus is known as sereh, serai or serai dapur in Indonesia and Malaysia and tanglad, salai or balioko in the Philippines.
It is used as a food condiment, especially for Asian cuisine; as a medicinal herb; the source of an essential oil; and as a soil conditioner and stabilizer.
Lemongrass must be stored separately from other foods, or it must be well wrapped, otherwise its strong scent will contaminate other foods.
In addition to food uses, this plant is used in the medicinal field.
Cymbopogon citratus leaves have been used in traditional medicine and are often found in herbal supplements and teas.
In the folk medicine of the krahô people of Brazil, it is believed to have anxiolytic, hypnotic and anticonvulsant properties.
In traditional Indian medicine, the leaves of the plant are used as a stimulant, sweat, anti-catarrhal, while the essential oil is used as a carminative, sedative, analgesic, antipyretic, antibacterial and antifungal agent.
Lemongrass is a bitter, aromatic and refreshing herb that increases perspiration and relieves spasms.
The essential oil contains about 70% citral, plus citronellal – both are markedly sedating.
Internally, the plant is mainly used as an herbal tea in the treatment of digestive problems, where it relaxes the muscles of the stomach and intestines, relieving cramping pains and flatulence.
It is particularly useful for children, for whom it is also used to treat minor febrile illnesses. [238
Externally, the plant is used mainly in the form of extracted essential oil; the plant is a very effective treatment for a number of skin conditions including athlete’s foot, ringworm, lice and scabies.
It is also applied to relieve pain in arthritic joints.
Beekeepers sometimes use lemongrass oil in swarm traps to attract swarms. Lemongrass oil has also been tested for its ability to repel the pestilent fly that bites pets.
Lemongrass oil contains 65-85% citral in addition to myrcene, citronellal, citronellol and geraniol. Distillation, condensation and cooling are used to separate the oil from the water. The hydrosol that is obtained as a by-product of the distillation process is used for the production of skin care products such as lotions, creams and face cleansers. The main ingredients of these products are West Indian lemon grass oil and “negros oil” (blend of lemongrass oil with virgin coconut oil) used in aromatherapy.
Citronellol has been shown to lower blood pressure in rats with a direct effect on vascular smooth muscle leading to vasodilation. In a small, randomized, controlled trial, a C. citratus infusion was used as an inexpensive remedy for the treatment of oral Candidiasis or Thrush in HIV / AIDS patients.
Furthermore, laboratory studies have shown cytoprotective, antioxidant and anti-inflammatory properties in vitro.
From a food point of view, Cymbopogon citratus is often sold in the form of a stem.
Among the edible uses we include:
– the heart of the young shoots is eaten as a vegetable with rice;
– the basal portions of the leafy shoots have a delicious lemon-like aroma and are used as flavoring in soups, sauces and curries; [301
– particularly appreciated in Southeast Asia, they are added to spicy sauces such as “sambal goreng” and “sambal petis” and to cooked fish and fish sauces; [310
– Older leaves can be cooked with other foods to give them their lemon-like flavor. They are removed before serving;
– A refreshing tea can be made from the leaves and can be served hot or cold or sweetened with sugar;
– the essential oil is used as a flavoring in the food industry in drinks and various foods.
Among other uses we remember those agroforestry. In fact, a good soil improver is obtained for worn soils. Plants quickly produce a large amount of organic material that soon rots, attracting worms and other useful creatures and rapidly enriching the soil.
A row of lemongrass plants can be used as a dividing hedge in the garden – it can help contain more invasive plants such as sweet potato and also as a barrier to prevent weeds from growing in the garden.
Grass is useful for soil improvement and erosion control.
The crops are used for the production of pulp and paper.
Also, among other uses, an essential oil obtained from the plant is used in perfumery, scented soaps, hair oils, cosmetics and as an insect repellent. The oil is also used in the synthesis of vitamin A.
The fresh leaves, crushed in water, are used as hair washers and toilet water.

Preparation Method –
Ready-made bundles of lemongrass, galangal, lime leaves and, for tom yam chicken, turmeric are sold in Thai markets.
Cymbopogon citratus is abundant in the Philippines and Indonesia where its fragrant leaves are traditionally used in cooking, particularly for lechon and roast chicken.
The dried leaves can also be infused into a tea, on its own or as a flavoring in other teas, imparting a flavor reminiscent of lemon juice but with a mild sweetness without significant acidity or acidity.
In Sri Lanka, lemongrass is known as sera (සේර) and is used as a herb in cooking, in addition to its use for essential oils.
In Thailand, where it is called takhrai (ตะไคร้), it is an essential ingredient of tom yam and tom kha kai. Fresh thin slices of lemonglass stem also used in miangpla, as a snack.