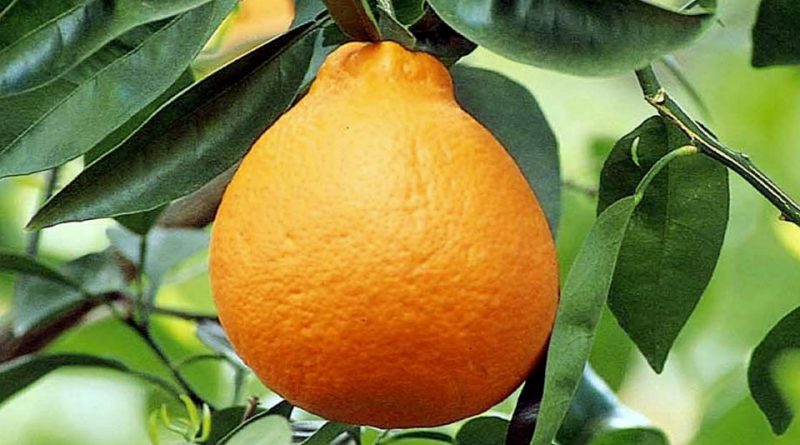 Systematics –
From the systematic point of view it belongs to the Eukaryota Domain, Kingdom Plantae, Magnoliophyta Division, Magnoliopsida Class, Sapindales Order, Rutaceae Family, Aurantioideae Subfamily, Citreae Tribe and therefore to the Genus Citrus and to the C. × tangelo Species.

Etymology –
The term Citrus comes from the Latin name of cedar and lemon, from the Greek Greek κέδρος kédros cedar and κίτρον kítron lemon.
The specific epithet tangelo comes from English, through the composition tang (erine) ‘tangerine’ (mandarin) and (pum) elo ‘grapefruit’.

Geographic Distribution and Habitat –
The Mapo is an intersection that appeared in the late 1800s in the United States. Today it is grown in California and Florida, while in Italy we find it in Sicily and Calabria.

Description –
The Citrus × tangelo is a tree with rapid growth up to over ten meters in height.
The foliage extends with a diameter similar to the height.
The branches are both weak and strong and rich in thorns, while the roots go very deep.
The flowers are white and are very attractive to bees.
Flowering occurs between the end of winter and the beginning of spring.
Its fruits are large berries, called hesperidium, characterized by a globular appearance with a protuberance at the upper end. The skin of the fruit is rather thin, which can be opened with the fingers and reaches a green color tending to yellow in its full maturity.
The pulp is made up of very juicy and fragrant wedges, in which it is possible to trace the sweetness of the mandarin although with the more acidic and bitter taste of the grapefruit. Inside there can be a variable number of seeds, depending on the species.

Cultivation –
Mapo is a citrus fruit that is cultivated with techniques very similar to other citrus fruits, considering, moreover, that due to the rather large foliage of this plant, the trees must be at the right distance from each other. This also facilitates proper pruning and the plant itself thus protects itself from winds and direct sunlight.
Like all citrus fruits, it prefers very bright and sunny places. What he fears most is the presence of air currents so it is necessary, where it is not possible to preserve too much in the open field, to guard against windbreak barriers.
The manual harvest of the fruits takes place between the months of October and January.
For the details of the cultivation technique, see the following sheet.

Customs and Traditions –
The Mapo is a cross between the mandarin, Avana cultivar, and the grapefruit, Duncan cultivar. It was obtained in 1950 in the Research Center for citrus and Mediterranean crops (ACM) in Acireale and released for cultivation in 1972.
Its shape is similar to that of grapefruit, but slightly smaller. It is characterized by a pleasantly sour taste with some mandarin notes.
The fruit is mainly consumed fresh or used for preserves and liqueurs.
The varieties of Mapo are: Orlando, Page, Minneola, Seminole and Sampson.
The characteristics remain in all species, but the size of the fruits and their fruiting change during the year. For example the Orlando is the one that knows best how to adapt to the cold and the one that has fewer seeds inside, showing itself with a characteristic cupped shape of the leaves.
Mapo is a fruit with numerous properties. Contains the following medium components:
– lipids: it is low-calorie (only 31 calories per 100 gr), therefore suitable for those who are following a slimming diet;
– vitamins: abundant presence of vitamin C and vitamin A and group B;
– mineral salts: rich above all in potassium, iron, iodine, magnesium and folic acid and the presence of iodine makes it a valid ally for the main problems related to the thyroid;
– sugars: it has few, so it can be consumed by diabetics;
– flavonoids.
Among the most important properties of this citrus we remember that:
– it is antioxidant: thanks to the presence of flavonoids, it fights cellular aging and prevents the formation of free radicals;
– it is anti-inflammatory: it acts against the main inflammations, also strengthening the immune system in view of seasonal ailments;
– it is anti-cellulite: vitamin C helps the drainage of liquids and promotes the production of collagen, keeping the skin elastic and toned and fighting the annoying problem of water retention;
– it is relaxing: it acts against sleep disorders, improving their quality and keeping insomnia at bay;
– lowers cholesterol: reduces the amount of triglycerides and lowers blood pressure, protecting from cardio-vascular problems.

Preparation Method –
Since Mapo is a hybrid between mandarin and grapefruit, its flavor is a bit sour but more pleasant than grapefruit.
The fruit of this citrus fruit is commonly used in the food sector to make liqueurs, vinaigrettes or to give a particular touch to salads. There is also a sweet from Molise, mapopan, which is nothing more than a panettone soaked in mapo liqueur.
For the rest it can be eaten fresh like other citrus fruits.