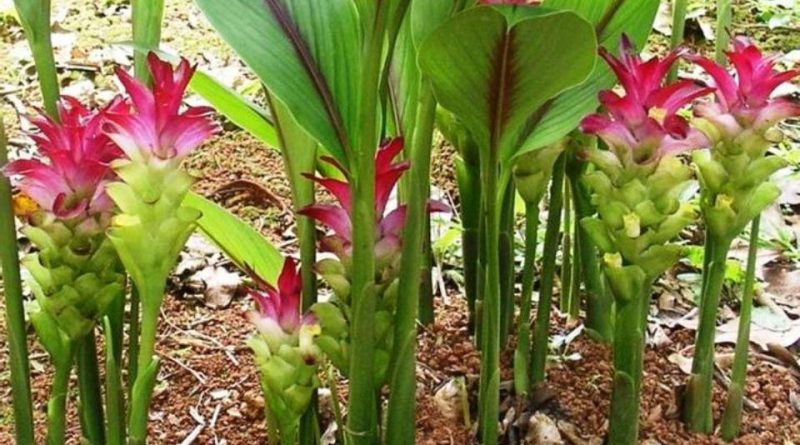 The Zedoary (Curcuma zedoaria (Christm.) Roscoe, 1807) is a perennial herbaceous species belonging to the Zingiberaceae family.

Etymology –
The term Curcuma comes from the Sanskrit kum kuma through the Arabic kurkum.
The specific epithet zedoaria comes from zedoari, the Indian vernacular name of the fruits of this plant.

Geographic Distribution and Habitat –
Zedoary is a plant native to India and grown in Southeast Asia. It is present in India, Ceylon, Annam, Malaysia, Indochina, North Vietnam and East Asia.
Its habitat is that of the humid forests of the hot, humid and lowland tropics, where it is found at altitudes up to 900 meters. It grows best in areas where annual daytime temperatures are between 22 and 27 ° C but can tolerate 14 – 32 ° C. 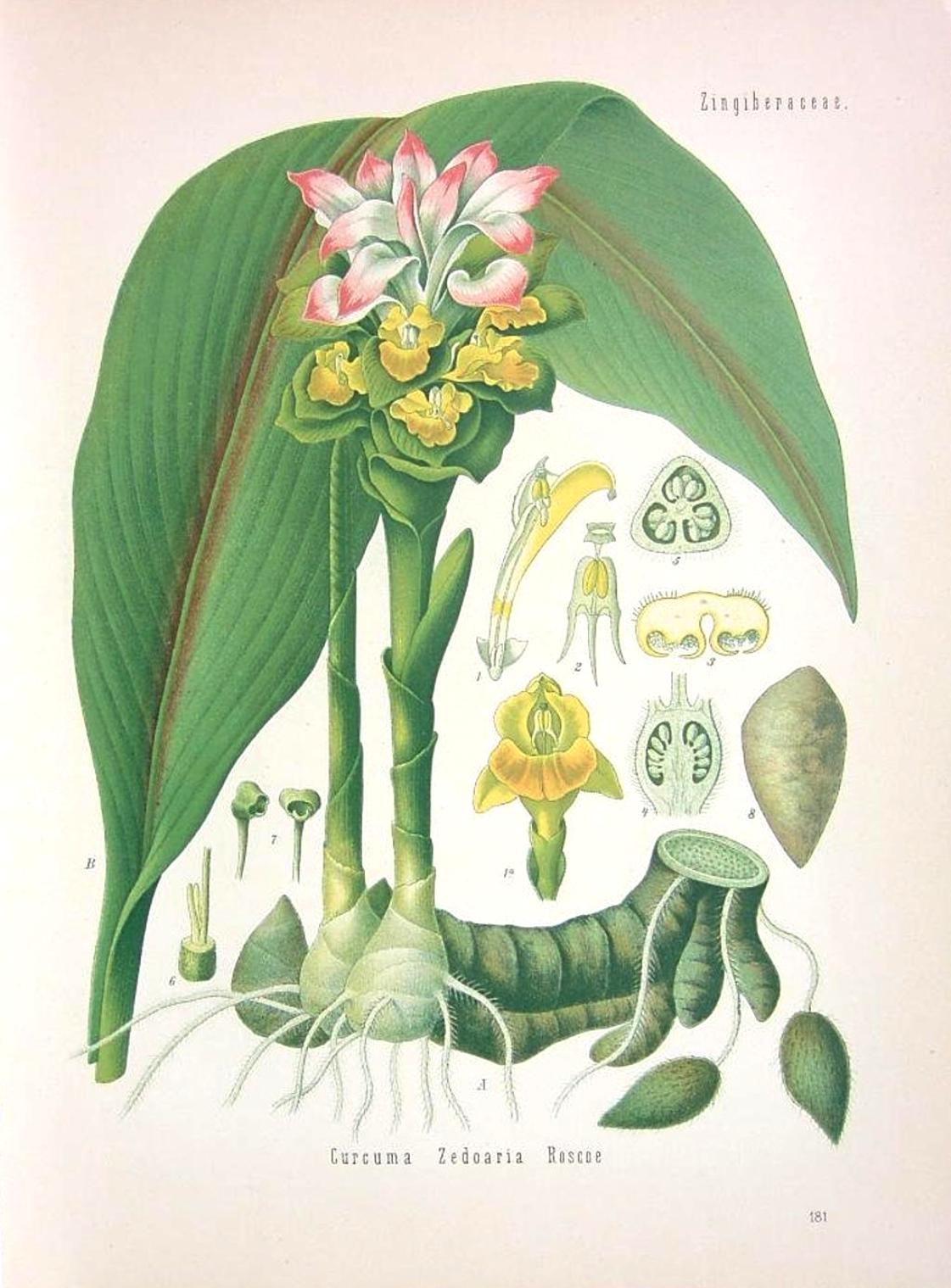 Description –
Curcuma zedoaria is a plant that has a large rhizome from which both sterile branches with lanceolate leaves and fertile branches with white-yellowish flowers with purple hues originate, ending with a tuft of white-purple bracts; these are about 75cm tall.
Each pseudo inflorescence includes about 5 leaves with blades about 35 cm long and 13 cm wide.
The green bracts form a series of pockets, which house large yellow flowers.

Cultivation –
Zedoary is a plant of the humid tropics that prefers an average annual rainfall between 1,100 and 1,500 mm, but tolerates 700 – 4,300 mm. Plants are adapted to growth in areas of seasonal drought in monsoon forests. It also prefers well-drained soil in a shaded position, succeeding even in full sun, and a pH between 5.5 and 6.5, tolerating 5 – 7.5.
The rhizomes can be harvested about 300 days after sowing.
Propagation can take place by seed, to be sown as soon as it is ripe; germinates best at temperatures around 20 ° C; it can also propagate by division of the rhizome when the plant is inactive.

Customs and Traditions –
Zedoary is an important crop, especially in home gardens, in Southeast Asia. Although it probably originates from northeastern India, it has long been cultivated and its origins have become unclear. It is also often grown as an ornamental plant and is also sometimes grown commercially as a spice and medicinal plant in the tropics.
Curcuma zedoaria is attributed carminative properties, stimulating the motility of the gastrointestinal tract and digestive functions.
It is rarely used in isolation, more often in combination with other drugs of similar action.
It is also sometimes used in cooking as a spice; it is part of the composition of some bitter-tonic liqueurs, having a marked action on the digestive system as an eupeptic and carminative.
The leaves are reminiscent of lemongrass (Cymbopogon spp) in flavor and are used as a flavoring in a variety of dishes.
The rhizome is eaten both raw and cooked.
The rhizome provides an easily digestible starch known as “shoti”. It is used as a component in diets for infants and invalids and can be used in ways similar to other starches obtained from tropical plants.
Slices of young rhizome (taken from above) can be eaten raw in salads.
The dried rhizome is used as a seasoning. The hearts of the young shoots can be eaten raw or cooked, while the inflorescences cooked.
This plant also has some medicinal uses
The rhizome contains a number of clinically active substances including an essential oil, sesquiterpenes, curcumemon, curcumol and curdione. Curcumol and curdione have shown anticancer properties.
Among the components, it should be remembered that the essential oil, which varies between 1-1.5%., Is obtained by steam distillation from dried rhizomes. From the pulverized dried rhizomes, 0.94% of essential oil was obtained, in which they found the following components.
In addition to essential oil, the following average values ​​have been found in the rhizomes of Curcuma Zedoaria: starch 50%, oil fat 2.45%, sugar 0.84%, ash 4.39%.
The rhizome is an aromatic, bitter and digestive stimulant that can be used in much the same way as ginger.
The rhizome is taken internally to improve digestion and to treat a range of digestive disorders including indigestion, nausea, flatulence and bloating.
It is used in China to treat cervical cancer.
The young parts of the rhizome are chewed as a treatment for bad breath.
Applied externally, the rhizome is used to cleanse and heal ulcers, wounds and other skin disorders.
In Chinese herbal medicine, the rhizome is often used as a substitute for turmeric (C. Longa).
As regards other uses, it should be noted that an essential oil obtained from the rhizome is used in perfumery and for a series of medicinal preparations.

Preparation Method –
The parts used in this plant are the rhizomes. Two varieties are distinguished; the longa and the rotunda, which were believed to derive from different plants. The tuberous rhizome (rotunda) emits lateral jets, the thickness of a finger, (longa) which end in new tuberous swellings, which, becoming free, at the death of the initial rhizome, will give rise to new plants.
On the market, the rotunda drug is presented or cut into rounds or ovoid pieces, more or less acute at the end, conical or pyramidal. The longa is also marketed cut into longitudinal slices, cylindrical on one face and flat on the other (peripheral) or flat on both sides (central) or slightly hollowed.