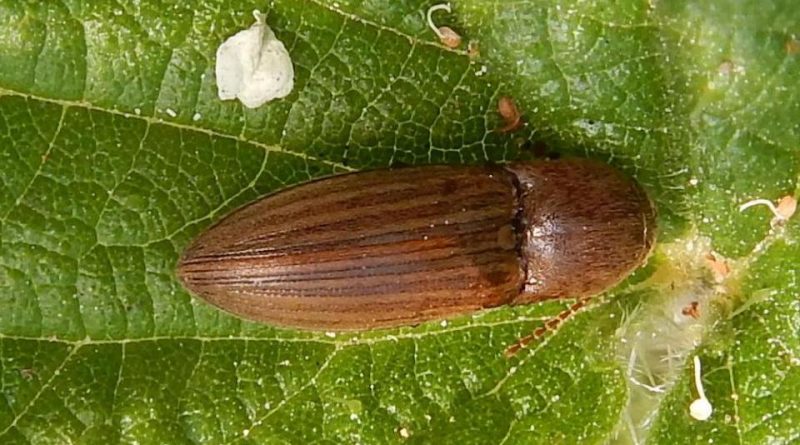 Geographic Distribution and Habitat –
Agriotes lineatus is an insect with a wide diffusion present in various parts of the world and in Europe even in the northernmost parts such as in England.
Its habitat is above all that of loose soils rich in organic matter where it lays its eggs both in the ravines and in depth.

Morphology –
Agriotes lineatus is a small beetle whose adults measure, on average, from 7 to 9 mm. The body is very elongated and entirely covered on the dorsal and ventral layer with a whitish gray pubescence and with a livery that generally varies from reddish-gray to dark brownish.
The head is broad and almost completely integrated with the chest. The pronotum is blackish brown, rounded on the dorsal layer, furthermore the head and the pronotum are much shorter than its antennae.
The elytra are elongated at the extremity and reddish in color.
The eggs are slightly oval in shape, not very regular, with the largest size reaching 0.5 mm.
The larvae measure 17 to 20 mm in length, with a width of less than 2 mm. they have a flattened head, short mandibles, cylindrical body, with a bright light yellow color, extremely hard and resistant; for this reason it is called “wire larva”.

Attitude and Life Cycle –
This insect causes damage to the roots of various plants, through its larvae that gnaw them causing wilting and vegetative decay.
It has a multi-year biological cycle, with the adults generally appearing in mid-March and feeding on contiguous spontaneous plants on which they mate.
The damage done by the larvae is linked to the moment in which they were born and to the environmental conditions. The cycle is repeated for 2-3 years until reaching maturity (4th-5th year). They complete their cycle every 4-5 years.
There is therefore a generation at the beginning of every 6 years. In the month of May in the 5th year of development, the larva enters the nymph stage. Adults are formed in the summer and remain in diapause until March of the following year. They lay at the end of May – beginning of June and the oviposition are scalar and continue until mid-summer.
The newly emerged larva is very polyphagous, and develops at the expense of the roots of various crops, especially in regions with a maritime and humid climate. In drier regions, natural grasslands provide the ideal environment for spawning. In intensively cultivated regions, forage legumes are practically the only crops on which these larvae can begin their development.
The adult form, at the end of the nymph stage, hibernates in the soil. This reappears in the spring and flies very little, only at night, but walks a lot. It feeds on the most varied wild and cultivated plants.
The male dies shortly after mating with the female towards the end of summer.
The eggs are laid in the soil at a depth of 20 – 60 mm, either alone or in groups of 3 to 12, preferably in moist or fresh soils. 150 to 200 eggs are laid.
The duration of embryonic development varies from 25 to 60 days, depending on the place of deposition and climatic conditions.
The larvae are very sensitive to drought and stand upright in the soil depending on humidity, soil temperature and season. The larva digs tunnels and attacks the underground parts of the plants, with pauses in activity in summer and winter. Larval evolution takes 4 years, during which time the larva moult 8 times.
The nymph stage lasts a month and develops in an earthy cavity located at a depth of 40 or 60 cm.

Ecological Role –
Click beetle causes damage to many plants, obviously creating particular problems for agricultural crops.
The seeds of the Beet are destroyed on more or less circular areas. Potato tubers are attached to ripening and have narrow, shallow galleries that depreciate their commercial value. Attacks on cereals occur with yellowing of the central leaf. Furthermore, the underground parts of the Carrot, the Hop, the Tomato, the Leek, the Chicory, the Lettuce, the Broad Bean, the ornamental plants or the young trees can be seriously affected.
The interventions to contain these Elateridae must start from population containment practices through agronomic precautions.
It must be considered, in fact, that these insects to complete their biological cycle are favored both by humid soils and by few processes. For this reason, it is appropriate to consider that drought periods are unfavorable to the massive proliferation of populations and, on the contrary, little worked crops (meadows and some forage) favor their repopulation.
Their population increases in the presence of peaty soils or in any case rich in organic substance, water stagnation and a prolonged grassing of the soils even by an infesting flora. These considerations are the basis of the rotation choices that must manage the succession of crops, especially with receptive species.
Chemical intervention must be carefully analyzed due to the obvious negative effects on soil fertility and interference on other insect populations.
Generally, direct treatments to the soil are performed.
The chemical fight must therefore be carried out following the criteria of guided and integrated fight. In areas considered not very infested, treatments are carried out only if a certain presence of larvae in the soil is exceeded; for this reason sampling in plots must be carried out, evaluating the real presence of the larvae.
In the case of strong presences, such as to determine a risk, interventions will be carried out. The monitoring of the larvae is now carried out with special cylindrical trap-jars, provided with holes on the sides and on the bottom, primed with well-moistened cereal seeds and vermiculite. The closed jar is buried in spring; the seeds of germinating cereals attract the larvae which are surveyed every 15 days.
The intervention threshold that has been proposed in cultivated areas in the Po-Veneto plain is 15 larvae / m2; furthermore, treatments are always carried out in very infested areas.
In these areas it must therefore be considered that agronomic changes must be implemented by adopting agro-ecological techniques that introduce rotations, associations and techniques that disadvantage the biological cycle of the insect.
Up to now, the chemical control is carried out with geodisinfestations after having possibly assessed the actual presence of the larvae and their threshold with monitoring carried out at the end of summer or autumn of the previous year. Granular products are used, generally distributed at sowing and located on the row.