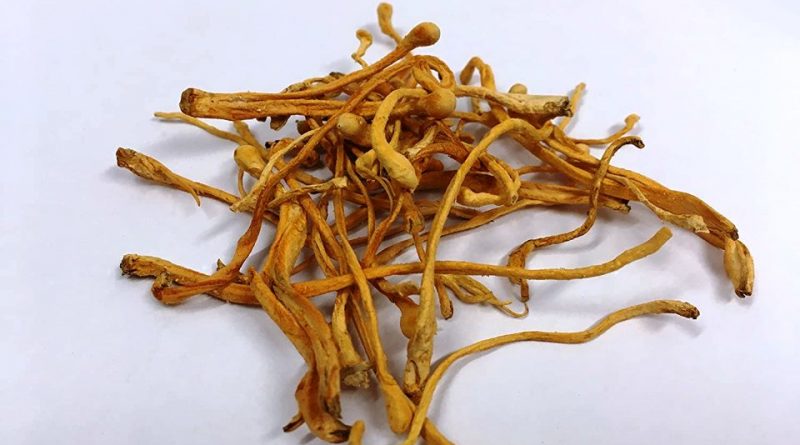 The Yartsa gunbu or caterpillar fungus (Cordyceps sinensis (Berk.) Sacc. 1878) is an Ascomycete mushroom belonging to the Cordycipitaceae family.

Etymology –
The term Cordyceps comes from the Greek κορδύλη cordýle clava and from the Latin suffix -ceps (derived from cáput) capo, testa: with a club-shaped hat.
The specific epithet sinensis comes from Sínae China: Chinese.

Geographic Distribution and Habitat –
Cordyceps sinensis is a mushroom with annual growth, with a harvest period between the months of April and August. Fructification occurs outside the body of moth larvae and thrives only at altitudes above 3,800 meters above sea level, in the cold, in alpine meadows in the mountainous Himalayan plateau, in Tibet, and in the modern Chinese provinces of: Sichuan, Gansu, Hubei, Zhejiang, Shanxi, Guizhon, Qinghai and Yunnan.
The caterpillar shows the first signs of fungal infection in spring, when the mycelium begins to decompose the body of the larva until it reaches complete fruiting. After the caterpillar’s food source has been exhausted and winter gives way to the spring and summer months, harvesting of this mushroom begins, also because the melting of low-altitude snow facilitates the process. 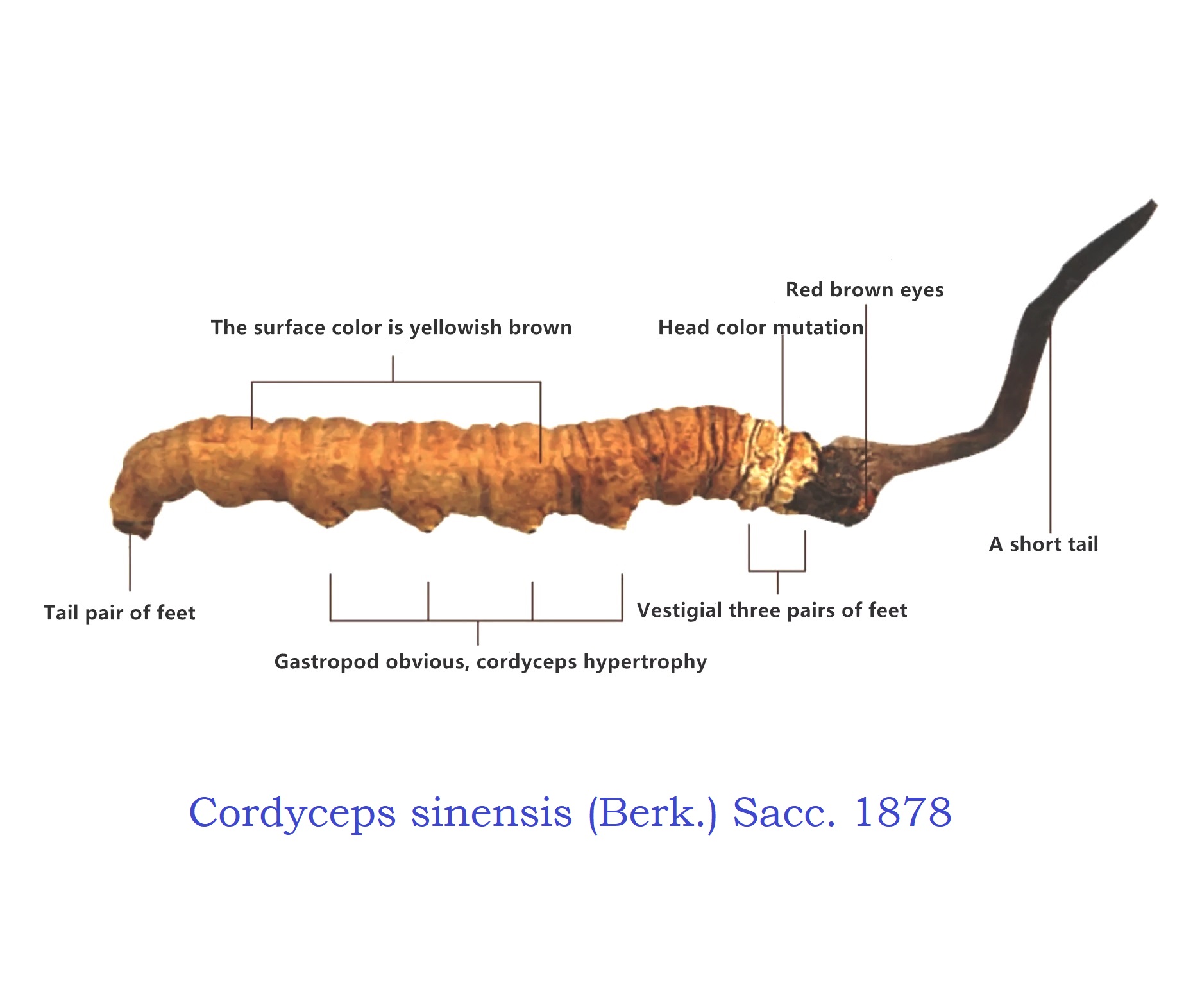 Recognition –
Cordyceps sinensis is recognized for having the ascocarp or fruiting body that grows from the head of the body of insect larvae (which are usually the larvae of the Tibetan moth, Hepialus armoricanus (synonym of Thitarodes armoricanus Oberthür, 1909), although from time to time it can be encountered on other host insects) and ends outside it, including the stem and the stroma.
The fruiting body is dark brown tending to black; the larval body that contains the mycelium of the fungus takes on a yellowish color tending to brown. The immature larvae, which constitute the incubator on which the Cordyceps grows, usually live about 6 centimeters below the ground, are 10-15 mm long and have a weight of about 0.05 g. The infesting spores of the fungus, which in the opinion of some mycologists may be the infectious agent for the insect, are about 5-10 µm long.
By the time the fungus approaches maturity, it will have already consumed more than 99% of the infested organism, completely mummifying its body. As the stroma matures, they swell and develop the perihelion. The average weight of an organism, including the stroma, is only about 0.06 g, conditions permitting; the spores are then discharged and carried by the wind a few centimeters from their original fall.
It should be remembered that Cordyceps, like many other Ascomycetes, can bear fruit in an imperfect (anamorph) stage that does not resemble the perfect (teleomorphic) stage.
Anamorphs, which have often been described under different names, are not easy to connect with teleomorphs because they only very rarely appear simultaneously.

Cultivation –
Cordyceps sinensis is a very rare mushroom that grows high in the highlands of Tibet and is very difficult to grow. Its enormous value has attracted, in the growing areas, numerous collectors also from other areas of China, creating discontent and even violent situations. This “Cordyceps race” has also led to an anticipation of harvest times with a consequent increase in the risk of extinction of this species. This anticipation does not allow this organism to produce and disseminate the spores, essential for its reproduction and survival. Fortunately, organizations with the aim of protecting this species from extinction, in collaboration with government institutions, are regulating its collection. In Europe, the import of Cordyceps is prohibited as it is an endangered species. Fortunately, a way has been found to cultivate Cordyceps in the laboratory in controlled cultures, thus reducing costs and allowing the use of this remedy all over the world.

Preparation Method –
Cordyceps sinensis is already on the market in various ready-to-use formulations. Generally, 2 to 6 teaspoons per day of Cordyceps sinensis powder are used, mixed with water, or in a yogurt, in a single solution, or by breaking up the intake during various times of the day. For better assimilation it is advisable to add lemon juice, which contains vitamin C. Since cordyceps is a highly digestible product, it can be taken on an empty stomach, or after meals.
By combining Vitamin C, the active ingredients present in mushrooms, are absorbed more completely in the intestine. This increases the effectiveness of the product.
It is possible to mix two or more mushrooms, or combine them with other herbs with a similar effect.