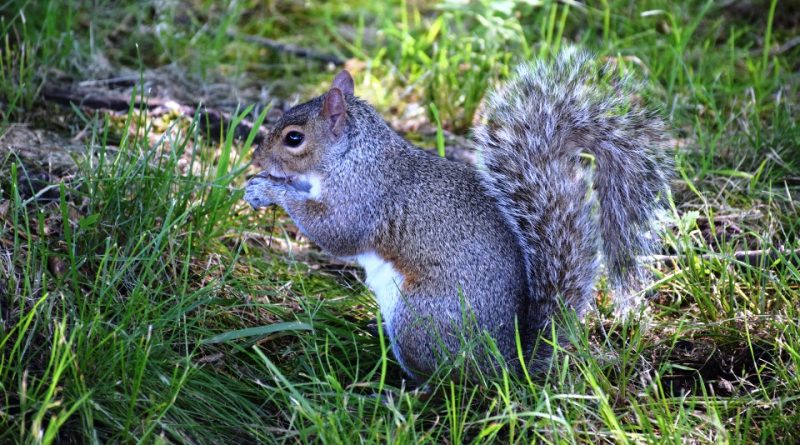 The Eastern gray squirrel (Sciurus carolinensis Gmelin, 1788) is a rodent mammal belonging to the Sciuridae family.

Systematics –
From the systematic point of view it belongs to the Eukaryota Domain, Animalia Kingdom, Phylum Chordata, Mammalia Class, Euarchontoglires Superorder, Rodentia Order, Sciuridae Family, Sciurinae Subfamily and therefore to the Sciurus Genus and to the S. carolinensis Species.

Geographic Distribution and Habitat –
The North American gray squirrel, from the Canadian province of New Brunswick to Florida and Texas, also called the eastern gray squirrel to distinguish it from the western species (Sciurus griseus Ord, 1818) is a rodent native to the Atlantic area of ​​North America.
This mammal has been introduced in other states of the USA and in other countries, including some Europeans, such as Ireland and Great Britain, where it has rapidly spread to the detriment of the similar but smaller Sciurus vulgaris.
In Italy, currently, we find isolated populations in Northern Italy (Piedmont, Liguria and Lombardy) and in Umbria where it represents a potential threat for the conservation of the common squirrel and, more generally, for forest biodiversity, throughout central Italy.
The native habitat of this species is represented by extensive and mature broad-leaved woods with rich undergrowth; however it is a very adaptable species that we also find in urban parks and public gardens, as long as there are trees. In areas where the species has been introduced, it can prove to be a scourge for cereal and nut crops, it also seriously damages forests as it has a tendency to debark trees during the winter, making them more susceptible to cold and to attacks by parasites.
Attempts have been made to eradicate it with a specific project since 1977. The project involved the capture and killing (after anesthetizing them) of the captured gray squirrel specimens, and recommended their total eradication, since the survivors could easily repopulate the area in a short time. The hypotheses of sterilization and reintroduction in nature, as well as those of transfer to the United States, were discarded, both for the extremely high costs, both for the however high mortality that this would entail, and for the risk of spreading the Parapoxvirus, which remained unchanged. The operation was then interrupted, after the suppression of 188 specimens, following complaints by the anti-hunting league and the antivivisection league for illegal hunting activities and for mistreatment of animals.
In this regard, the position of the various environmental associations is somewhat divergent. 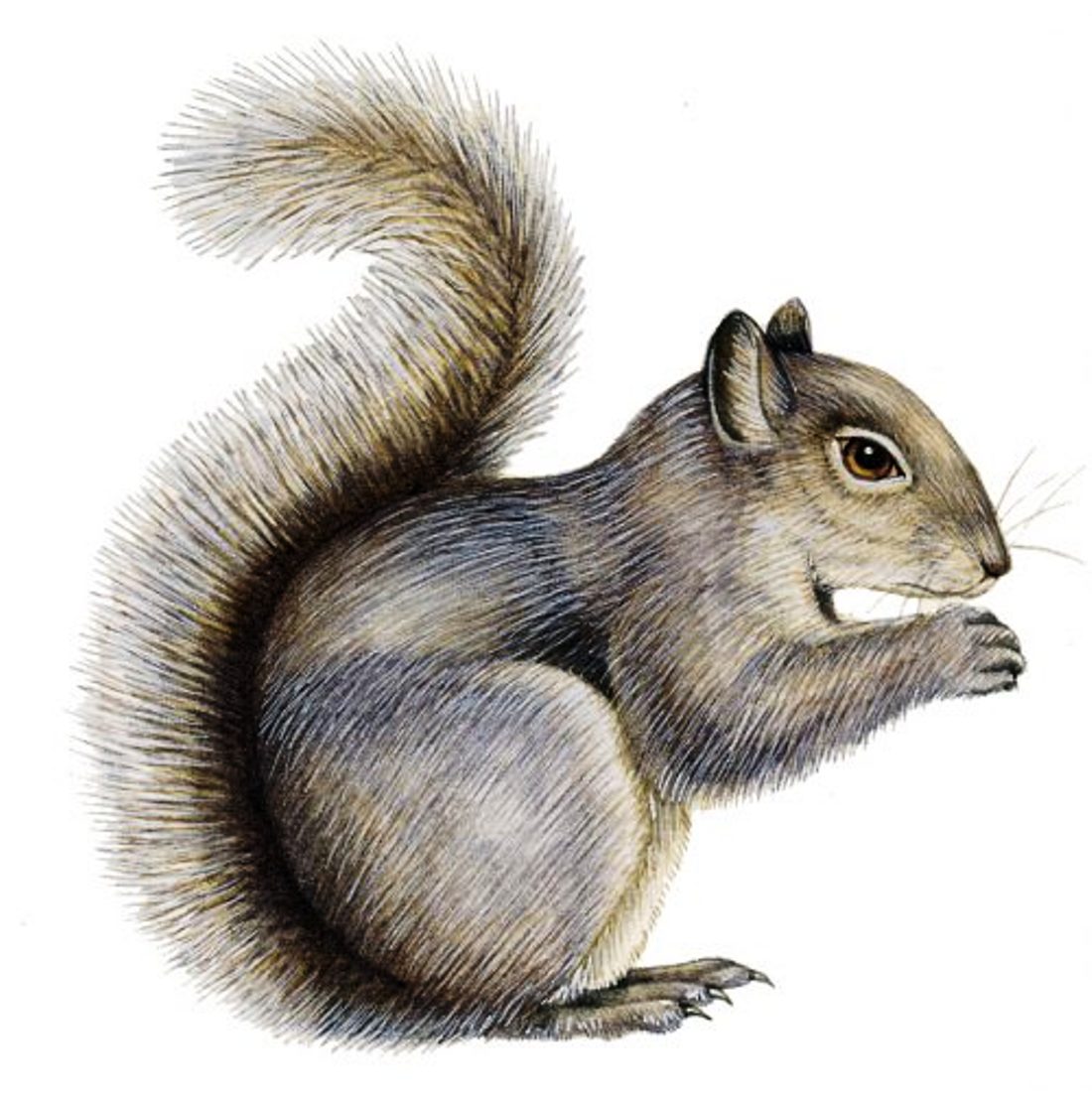 Description –
The Eastern gray squirrel is a rodent that is recognized for having a length of about 25 and as many of the tail, for a total length of 50 cm, with an average weight of about 500 grams.
The coat has a light gray color, with reddish shades on different parts of the body, with more or less accentuated shades depending on the subspecies. The ventral area and throat are usually white in color.
From the point of view of the difference in populations, in general, in the NE-SO direction, a decrease in the general dimensions is found, even if those of the jaw and teeth remain constant. Furthermore, it seems that the incidence of melanistic individuals is higher in the north, where this characteristic involves less heat dispersion, while albino specimens are more frequent in urbanized areas, where predation is much less.

Biology –
The female of the Sciurus carolinensis goes into heat twice a year: the first between December and February and the second between May and June, but at higher latitudes the estrus is later. During the period of estrus, males enter into competition, even violently, in order to grab the right to mate; moreover the males begin to follow the females, usually, five days before the start of estrus.
After mating, the pregnancy period lasts about a month and a half, at the end of which an average of four puppies are born, which are weaned at seven weeks of age and leave the nest about a month later.
During the lactation phase the female is very aggressive with possible strangers. The adult size is reached around nine months of age. The young are able to reproduce starting from the sixth month of life but it is rare for them to mate before reaching one year of age, especially the females.
The life expectancy of these animals is about 12 years, although in captivity various specimens have lived up to over 22 years.

Ecological Role –
The Eastern gray squirrel is a species with diurnal habits that spends time looking for food (mainly seeds and dried fruit) and then hides in the hollows of tree trunks or in holes in the ground that it then covers; it also does not hibernate in the winter months.
It is a species mostly diurnal with peaks of activity in the early morning and at sunset, while it spends the central hours of the day in a state of inactivity: during the night it sleeps in nests that it builds at the bifurcations of the branches using dry leaves and brushwood, or in hollows of trees lining the same way.
Each animal has a few hundreds of food shelters, to locate which it uses the olfactory signals it leaves near them, but not in the immediate vicinity as this would make the pantry easy for other animals to locate.
This habit is made possible by the fact that this squirrel has an excellent spatial memory, to be able to remember the location of the shelters: nevertheless, it happens that some of them are forgotten by the animal, allowing the seeds to germinate and thus contributing to some extent reforestation of the areas where the animal lives.
Sciurus carolinensis has been included in the IUCN list of 100 of the most harmful invasive species in the world. In fact, in the areas where the species has been introduced, it can prove to be a scourge for cereal and nut crops, it also seriously damages forests as it has a tendency to bark trees during the winter, making them more susceptible to cold and attacks by parasites.
According to the IUCN, in fact, the species is considered invasive due to the negative impact it exerts on the forest biocoenosis and on the Common Squirrel (Sciurus vulgaris) in particular (Gurnell et al. 2004). The predominantly food competition between the two species of sciuridae leads to the extinction of the native species. For this reason, numerous national and international organizations have asked Italy to eradicate and, where not possible, control the Italian gray squirrel populations to limit their expansion and ensure the conservation of the common squirrel.