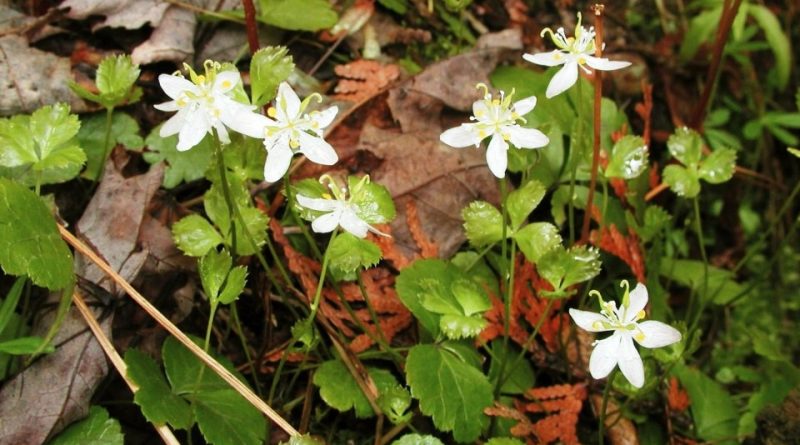 The Threeleaf goldthread (Coptis trifolia Salisb.) Is a perennial herbaceous species belonging to the Ranunculaceae family.

Etymology –
The term Coptis comes from modern Latin, in turn from the Greek koptein, to be truncated, for the divided leaves.
The specific trifolia epithet comes from the prefix tri-tre and fólium leaf: with leaves made up of three leaflets.

Geographic Distribution and Habitat –
Coptis trifolia is a plant of a range that includes the whole of North America up to northern Asia and Japan.
The plant is listed as Endangered in Maryland and classified as Sensitive in Washington State.
Its habitat is in humid to mesic, coniferous and mixed forests, peat bogs, willow scrub and tundra, often associated with moss, from sea level to 1500 meters.
The dominant trees in this habitat are spruce, sugar maple, American beech, yellow birch and red maple, with scattered balsamic fir. 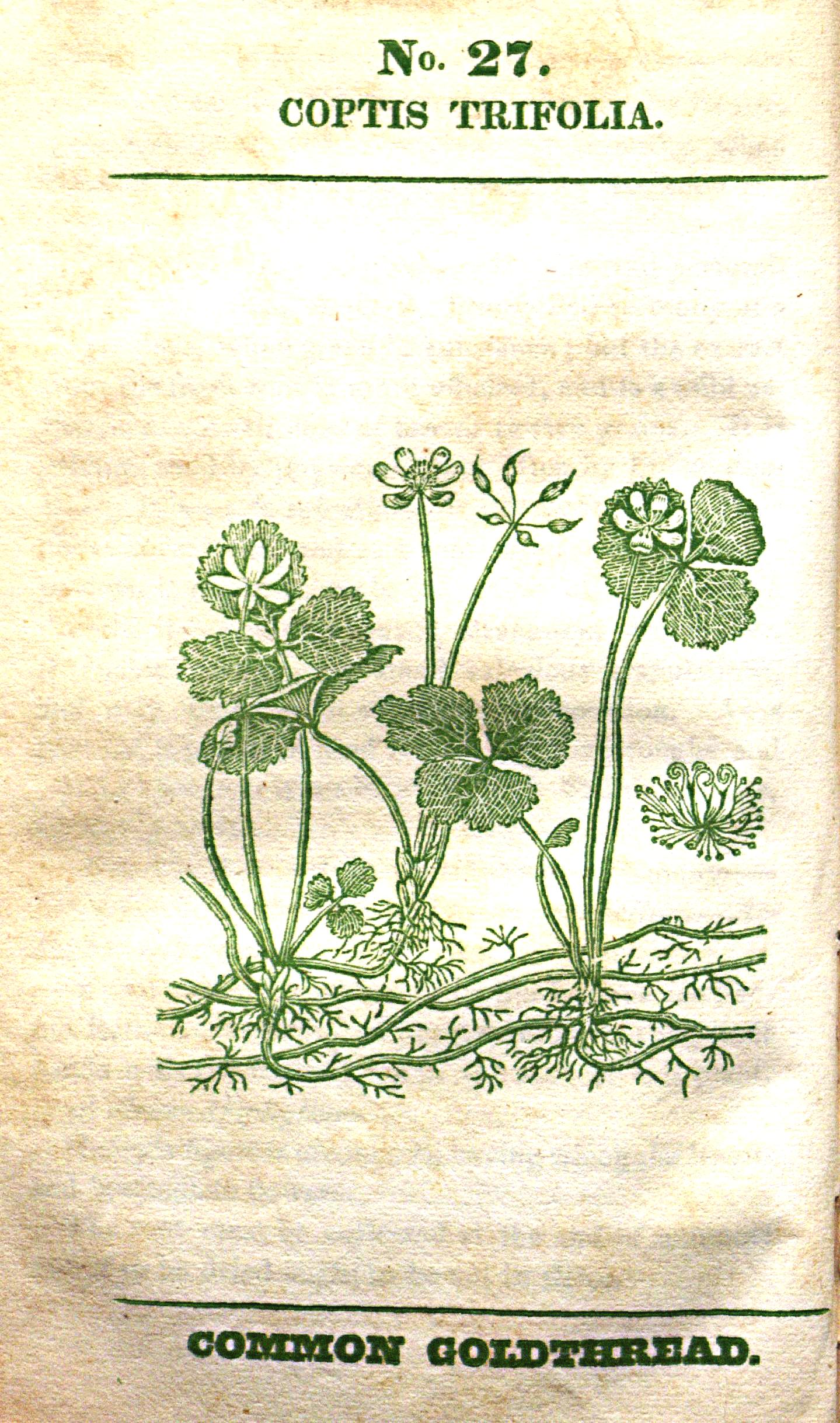 Description –
Coptis trifolia is an evergreen perennial that grows to a size of 0.2m by 0.5m.
The root is rhizomatous with underground stems that send roots and shoots along their length. The long underground stem is golden yellow and gives the plant its name.
The leaves are small, evergreen, deeply trefoil, rising from the ground.
The sepals are white and are easily mistaken for petals. The four to seven petals are yellow and club-like, and are smaller than the stamens which are numerous and thread-like with delicate anthers.
The fruit is a series of four or seven pods, each about 1/3 inch long. The capsule-shaped fruit changes from green to tan or tan and opens to expose the seeds.

Cultivation –
The Coptis trifolia, in order to grow, requires a slightly humid soil rich in slightly acid humus with northern exposure and a slight shade.
The plant resists low winter temperatures; as for the heat tolerance at 30 ° C it begins to suffer from the heat.
The plant spreads indefinitely from rhizomes or stolons.
However, for propagation it is possible to start from seed; in this case it is better to sow in a greenhouse as soon as it is ripe in a heather-based compost.
It is recommended to seal the pot in a poly bag until germination occurs, which is usually within 1 – 6 months at 10 ° C. The stored seeds should be sown as early as possible in the year. Four-week cold stratification can be helpful. Once the young plants are large enough they should be placed in individual pots and grown in a shaded area of ​​the greenhouse, at least for their first winter. The transplant should be done in mid-autumn or in spring. The division instead in the spring period.

Customs and Traditions –
The rhizomatous part of the plant was chewed by Native Americans to relieve canker sores; it has also been used to prepare a tea used as eye drops.
Coptis trifolia is a very bitter-tasting herb that in the past was highly valued and widely used, as mentioned, in North America by native Indians and white settlers alike, although it is little used in modern herbal medicine. It has been used primarily to treat any pain in the mouth. The dried roots, stems and leaves are anti-inflammatory, highly astringent, sedative, gastric, tonic.
The plant is popular as a local application in the treatment of thrush in children. It is also used in the treatment of ulcerated mouths and as a gargle for a sore throat or mouth. It is said to be useful in the treatment of dyspepsia and useful in combating the habit of alcohol. The plant contains the alkaloid “berberine” which is a mild sedative, anti-inflammatory and antibacterial.
A yellow dye is obtained from the leaves and stems of the plant.
It can be grown as a ground cover plant in peaty gardens.
While no specific mention of toxicity has been found for this species, it belongs to a family that contains many species that are mildly toxic and therefore it is wise to treat this plant with some caution.

Preparation Method –
For the use of this plant, the roots are harvested in autumn and dried for later use.
The whole plant is said to be eaten, or it can be mixed with sassafras root bark and Irish moss and brewed into a kind of herb root beer. This plant gives a bitter taste and a yellow color to the drink.
At one time, some Native American groups also used the roots as a yellow dye.